NASA scientists believe they have found a way to predict the color of plants on planets in other solar systems.

The double sunset that Luke Skywalker gazed upon in the film "Star Wars" might not be a fantasy.

Astronomers using data from several X-ray satellites have caught a magnetar – the remnant of a massive star with an incredibly strong magnetic field – in a sort of giant cosmic blench.

In a galaxy far, far away, a massive star suffered a nasty double whammy. On Oct. 20, 2004, Japanese amateur astronomer Koichi Itagaki saw the star let loose an outburst so bright that it was initially mistaken for a supernova. The star survived, but for only two years. On Oct. 11, 2006, professional and amateur astronomers witnessed the star actually blowing itself to smithereens as Supernova 2006jc. 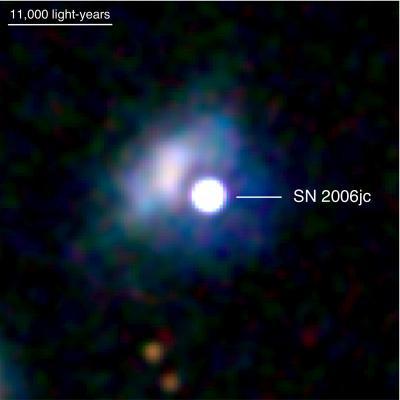 NGC 1672, visible from the Southern Hemisphere, is seen almost face on and shows regions of intense star formation. The greatest concentrations of star formation are found in the so-called starburst regions near the ends of the galaxy's strong galactic bar. NGC 1672 is a prototypical barred spiral galaxy and differs from normal spiral galaxies in that the spiral arms do not twist all the way into the centre.

Astronomers at the Naval Research Laboratory (NRL) have produced the first images of the sky from a prototype of the Long Wavelength Array (LWA), a revolutionary new radio telescope to be constructed in southwestern New Mexico. The images show emissions from the center of our Galaxy, a supermassive black hole, and the remnant of a star that exploded in a supernova over 300 years ago. Not only a milestone in the development of the LWA, the images are also a first glimpse through a new window on the cosmos. "First light" is an astronomical term for the first image produced with a telescope.

An odd, six-sided, honeycomb-shaped feature circling the entire north pole of Saturn has captured the interest of scientists with the Cassini mission.

Imagine two stars with winds so powerful that they eject an Earth's worth of material roughly once every month. Next, imagine those two winds colliding head-on. Such titanic collisions produce multimillion-degree gas, which radiates brilliantly in X-rays. Astronomers have conclusively identified the X-rays from about two-dozen of these systems in our Milky Way. But they have never seen one outside our galaxy — until now.

University of Chicago scientists will demonstrate how to incinerate a white dwarf star in unprecedented detail at the “Paths to Exploding Stars” conference on Thursday, March 22, in Santa Barbara, Calif.

Using ESO's Very Large Telescope, an international team of astronomers has shown how to use the chemical composition of stars in clusters to shed light on the formation of our Milky Way. This discovery is a fundamental test for the development of a new chemical tagging technique uncovering the birth and growth of our Galactic cradle.

In 2002, when astronomers first detected cosmic gamma rays – the most energetic form of light known – coming from the constellation Cygnus they were surprised and perplexed. The region lacked the extreme electromagnetic fields that they thought were required to produce such energetic rays. But now a team of theoretical physicists propose a mechanism that can explain this mystery and may also help account for another type of cosmic ray, the high-energy nuclei that rain down on Earth in the billions.

Scientists have used the world's largest robotic telescope to make the earliest-ever measurement of the optical polarisation* of a Gamma Ray Burst (GRB) just 203 seconds after the start of the cosmic explosion. This finding, which provides new insight into GRB physics, is published in Science today (15th March 2007).

Instruments on NASA's Cassini spacecraft, part of the joint NASA/ESA/ASI Cassini-Huygens mission to Saturn and its moons, have found evidence for seas, likely filled with liquid methane or ethane, in the high northern latitudes of Saturn's moon Titan.