A team of University of Georgia researchers has developed a new biofuel derived from wood chips. Unlike previous fuels derived from wood, the new and still unnamed fuel can be blended with biodiesel and petroleum diesel to power conventional engines.

Scientists have observed the first evidence that the Southern Ocean's ability to absorb the major greenhouse gas, carbon dioxide, has weakened by about 15 per cent per decade since 1981.

Forecasters will test a new technique this summer that provides a detailed 3-D view of an approaching hurricane every six minutes and allows them to determine whether the storm is gathering strength as it nears land. The technique, developed by researchers at the National Center for Atmospheric Research (NCAR) and the Naval Research Laboratory (NRL), relies on the existing network of Doppler radars along the Southeast coast to closely monitor hurricane winds. 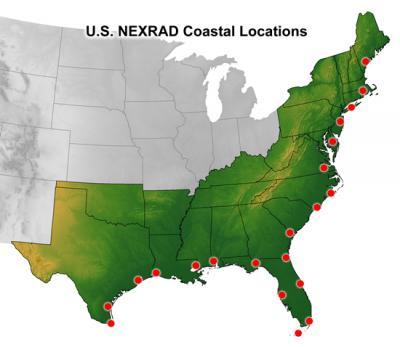 This map shows the locations of NOAA Doppler radars along the East and Gulf coasts.

They describe how creatures in the deeper parts of the Southern Ocean - the source for much of the deep water in the world ocean – are likely to be related to animals living in both the adjacent shallower waters and in other parts of the deep ocean.

The origin and movement of waves reaching up to 11 metres that devastated France's Reunion Island in the Indian Ocean on Saturday evening have been detected with ESA's Envisat satellite.

The waves that thrashed the southern port of Saint Pierre, leaving two fishermen missing, causing several piers to collapse and flooding several homes and businesses, originated south of Cape Town, South Africa, and travelled northeast for nearly 4000 km over a period of three days before slamming into Reunion Island.

The small ice caps of Mont Blanc and the Dôme du Goûter are not melting, or at least, not yet. This is what CNRS researchers have announced in the Journal of Geophysical Research. At very high altitudes (above 4200 meters), the accumulation of snow and ice has varied very little since the beginning of the 20th century.

Tropical deforestation is the source of nearly a fifth of annual, human-induced emissions of heat-trapping gases to the atmosphere. During droughts, emissions from tropical rainforest fires can be double that. Halving deforestation rates by mid-century would account for 12 percent of total emissions reductions needed to keep concentrations of heat-trapping gases in the atmosphere at safe levels.

A NASA-funded expedition, including researchers from Carnegie Mellon University’s Robotics Institute, will begin searching for the submerged bottom of Mexico’s El Zacatón sinkhole with a robotic submarine the week of May 14.

A study released today provides some of the first solid evidence that warming-induced changes in ocean circulation at the end of the last Ice Age caused vast quantities of ancient carbon dioxide to belch from the deep sea into the atmosphere. Scientists believe the carbon dioxide (CO2) releases helped propel the world into further warming. The study, done by researchers at the University of Colorado, Kent State University and Columbia University's Lamont-Doherty Earth Observatory, appears in the May 10 advance online version of the leading journal Science.

A research team, including Kent State Professor of Geology Dr. Joseph Ortiz, tracing the origin of the large carbon dioxide increase in Earth’s atmosphere at the end of the last ice age has detected two ancient "burps" that originated from the deepest parts of the southern ocean around Antarctica.

The new study showed carbon that had built up in the ocean over millennia was released in two big pulses at about 18,000 years ago and 13,000 years ago, says Dr. Thomas Marchitto of the University of Colorado at Boulder, who jointly led the study with colleague Dr. Scott Lehman.

Dr Pep Canadell, from the Global Carbon Project and CSIRO Marine and Atmospheric Research, says today in the journal Science that tropical deforestation releases 1.5 billion tonnes of carbon each year into the atmosphere.

Ghost of the Ice Age

Researchers have uncovered a large area of low but increasing gravity over North America – the lingering effect of the last ice age when sheets of ice sometimes three kilometres thick covered nearly all of Canada and the northeastern U.S.

Scientists have discovered how ocean circulation is working in the current that flows around Antarctica by tracing the path of helium from underwater volcanoes. The details are published in Nature this week.

The team, led by Alberto Naveira Garabato of the National Oceanography Centre, Southampton (formerly based at the University of East Anglia), has discovered a 'short-circuit' in the circulation of the world's oceans that could aid predictions about future climate change.

A diet high in whole grain foods is associated with a significantly lower risk of developing cardiovascular disease, including heart disease and stroke, according to an analysis conducted by researchers at Wake Forest University School of Medicine.

A new study by NASA scientists suggests that greenhouse-gas warming may raise average summer temperatures in the eastern United States nearly 10 degrees Fahrenheit by the 2080s.

"There is the potential for extremely hot summertime temperatures in the future, especially during summers with less-than-average frequent rainfall," said lead author Barry Lynn of NASA's Goddard Institute for Space Studies and Columbia University, New York.