Why does a moving bicycle not fall over? TU Delft casts aside some old theories

Given sufficient forward speed, a bicycle pushed sideways, will not fall over. Scientists have been trying to find a conclusive explanation for this remarkable characteristic for over a century. This week, researchers at Delft University of Technology (TU Delft, The Netherlands) have thrown new light on the question in a publication in Science.

The research at TU Delft, in collaboration with scientists from Cornell University (USA), centred on the following intriguing question: why is a bicycle self stable, above a certain speed? You add speed to a bike and can then give it a sideways push without it falling over.

Scientists have long been poring over this complicated question, even from as far back as the nineteenth century. Until recently, the consensus within the scientific community was that the stability was very closely related to two factors. First, the rotating wheels of the bicycle were supposed to provide stability through gyroscopic effects. Secondly, it was thought that the 'trail' played an important part. Trail is the distance by which the contact point of the front wheel trails behind the steering axis.

The publication by TU Delft in Science puts paid to this old notion once and for all. 'We have known for years that the generally accepted explanation for the stability of the bicycle was too simple,' says researcher Dr Arend Schwab of the 3mE faculty at TU Delft. 'Gyroscopic effects and trail do help, but are not essential for stability.' Dr Schwab and a number of colleagues brought out a publication several years ago on the theory behind the stability of the bicycle (in 2007 in Proceedings of the Royal Society, doi:10.1098/rspa.2007.1857). A mathematical model with around 25 physical parameters was developed at the time, which appeared to be able to predict very accurately whether, and at what speeds, a particular design of bicycle would be stable.

'In our publication in Science we have now shown not only theoretically but also by means of experiment that our insights are correct.' Together with PhD student Jodi Kooijman, Schwab designed and constructed a bicycle with which it could be shown, in an experiment, that both gyroscopic effects and trail are not necessary for a bicycle to remain stable by itself above a certain speed.This is the so-called Two Mass Skate bicycle. It has small and counter rotating wheels, which means there is no gyroscopic effect to speak of, and a small negative trail (in other words, where the point of contact of the front wheel is marginally in front of the steering axis). And yet the bicycle remains stable.

'It was not easy,' explains PhD student Jodi Kooijman, who carried out most of the experimental work. 'The first prototype did not work, and we had almost given up hope after a number of iteration attempts, when we suddenly found ourselves able to show the stability. But of course everything has to fall into place. You have to deal with the ground surface, for example, which has to have exactly the right roughness and stiffness. In Sporthal II of TU Delft we found all the right conditions.'

So the theory has now been proven by experiment. But has the experimental work led to the emergence of new theoretical insights? Dr Schwab answers, 'We have demonstrated that the mass distribution is also important for stability, especially the location of the centre of mass of the bicycle's steering mechanism.' For a bicycle to be stable, the steering mechanism has to be unstable; if the bike falls, the steering should fall even more quickly.

Are the theoretical insights of Schwab and his companions of any use to bicycle manufacturers? 'Certainly. Today's bicycles are the result of a fairly long evolutionary process, and are therefore rather conservative. Essentially, there is nothing about the basic design of the bicycle that has changed since the end of the nineteenth century. Manufacturers can use our model to make directed modifications to the stability of their bicycles. That may be of particular interest for unusual designs, such as recumbent bicycles, folding bicycles and cargo bicycles.' 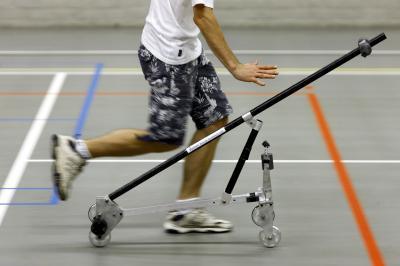 Researchers of Delft University of Technology (TU Delft, The Netherlands) have developed this self-stable experimental TMS bicycle. With it they cast aside some old theories on the stability of moving bikes.