Once the engulfing — endocytosis — begins, there is no turning back. Within minutes, the cell senses it can't fully engulf the nanostructure and essentially dials 911. "At this stage, it's too late," Gao said. "It's in trouble and calls for help, triggering an immune response that can cause repeated inflammation."

The team hypothesized the interaction using coarse-grained molecular dynamic simulations and capped multiwalled carbon nanotubes. In experiments involving nanotubes and gold nanowires and mouse liver cells and human mesothelial cells, the nanomaterials entered the cells tip-first and at a 90-degree angle about 90 percent of the time, the researchers report.

"We thought the tube was going to lie on the cell membrane to obtain more binding sites. However, our simulations revealed the tube steadily rotating to a high-entry degree, with its tip being fully wrapped," said Xinghua Shi, first author on the paper who earned his doctorate at Brown and is at the Chinese Academy of Sciences in Beijing. "It is counter-intuitive and is mainly due to the bending energy release as the membrane is wrapping the tube."

The team would like to study whether nanotubes without rounded tips — or less rigid nanomaterials such as nanoribbons — pose the same dilemma for cells.

"Interestingly, if the rounded tip of a carbon nanotube is cut off (meaning the tube is open and hollow), the tube lies on the cell membrane, instead of entering the cell at a high-degree-angle," Shi said. 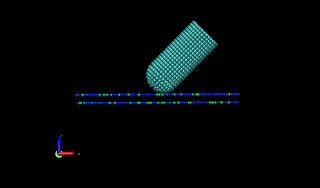 Receptors on the cell's surface crowd around the nanotube, effectively standing it upright. The cell mistakes the tube for a sphere and begins to engulf it. 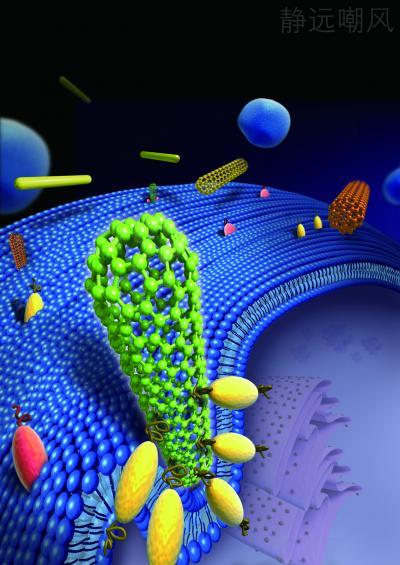 Cells ingest things by engulfing them. When a long perpendicular fiber comes near, the cell senses only its tip, mistakes it for a sphere, and begins engulfing something too long to handle.