The Woods Hole Research Center has released the first hectare-scale maps of canopy height, aboveground biomass, and associated carbon stock for the forests and woodlands of the conterminous United States. The multi-year project, referred to as the National Biomass and Carbon Dataset (NBCD), produced maps of these key forest attributes at an unprecedented spatial resolution of 30 m. The digital raster data set is now freely accessible from the WHRC website at www.whrc.org/nbcd.

According to Dr. Josef Kellndorfer, who led the project at WHRC, "We are excited about the completion of this mapping project. The dataset represents a comprehensive assessment of forest structure and carbon stock within the lower 48 States at the beginning of the third millennium, providing an important baseline with which to improve our understanding of the United States forest resources and its link to the terrestrial carbon flux in North America. This dataset will be useful to foresters, wildlife ecologists, resource managers, and scientists alike."

Volker Radeloff, professor at the University of Wisconsin-Madison, Department of Forest and Wildlife Ecology, added, "Vegetation structure data has been the holy grail for biodiversity science: absolutely essential, but unattainable for large areas. The NBCD data set fills this crucial gap and will advance of our understanding of why biodiversity is so much higher in some areas than others, and target biodiversity conservation efforts."

The project was initiated in 2005 with funding from NASA's Terrestrial Ecology Program as well as support from the USGS/LANDFIRE consortium. Collaborators included the U.S. Forest Service Forest Inventory and Analysis (FIA) Program, and the National Land Cover Database (NLCD 2001) and National Elevation Dataset (NED) project teams at the USGS EROS Data Center. 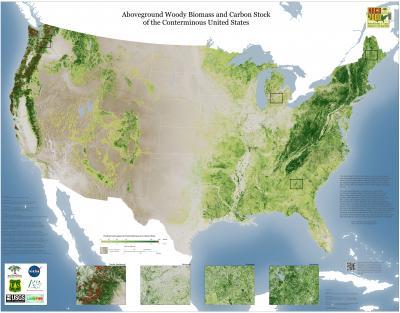 "This effort is an excellent example of FIA partnering to marry ground and remotely-sensed data to provide natural resource information at resolutions much finer than the FIA sampling frame," said Dennis May, Forest Inventory and Analysis program manager with the U.S. Forest Service, Northern Research Station.

Dr. Wayne Walker, a Center scientist who also worked on the project, added, "Maps of key forest attributes like canopy height and carbon stock have not existed for the U.S. at this level of spatial detail and consistency. They will provide ecologists and land managers with new and better information to support biodiversity conservation, wildfire risk assessment, and timber production while helping climate scientists and others to better understand the role that U.S. forests play in the global carbon cycle."

According to Kellndorfer, "This dataset will advance our understanding of the United States natural resources, provide an invaluable circa year 2000 baseline against which to assess changes in the future, and help to improve our understanding of the drivers for change, and thus supporting good decision making. Naturally we are keen to produce the next generation data sets of this kind to assess in detail how carbon stock and forest structures are changing in this country, and internationally. We look forward to working¬¬ with an ever growing community of colleagues in the U.S. and abroad on pushing the science of understanding the World's forests forward."

Dr. Kellndorfer's research focuses on the monitoring and assessment of terrestrial and aquatic ecosystems, and the dissemination of Earth observation findings to policy makers through education and capacity building. Using geographic information systems (GIS), remote sensing, and modeling, he studies land-use, land cover and climate change on a regional and global scale. His projects include carbon and biomass mapping of the United States, mapping forest cover across the tropical forested regions of Africa, Latin and Asia through the generation of consistent data sets of high-resolution, cloud-free radar imagery. He is a Senior Scientist at the Center. Before joining the WHRC, Kellndorfer was a research scientist with the Radiation Laboratory in the Department of Electrical Engineering and Computer Science at the University of Michigan. He holds a diploma degree in physical geography and a doctorate in geosciences from the Ludwig-Maximilians-University in Munich, Germany. He serves on various expert working groups within NASA, the Group on Earth Observation, and GOFC-GOLD addressing forest carbon measurements in vegetation from remote sensing with existing and future remote sensing and field measurements.

Dr. Walker is an ecologist and remote sensing specialist interested in applications of satellite imagery to the assessment and monitoring of temperate and tropical ecosystems at regional to global scales. His research focuses on measuring and mapping forest structural attributes, land cover/land use change and terrestrial carbon stocks in support of habitat management, ecosystem conservation and carbon-cycle science. He is committed to building institutional capacity in the tools and techniques used to measure and monitor forests, working in collaboration with governments, NGOs and indigenous communities across the tropics. He is an Assistant Scientist at the Center. Walker holds degrees in forest ecology (M.S.) and remote sensing (Ph.D.) from the University of Michigan.