When do alcohol-dependent mothers parent harshly? 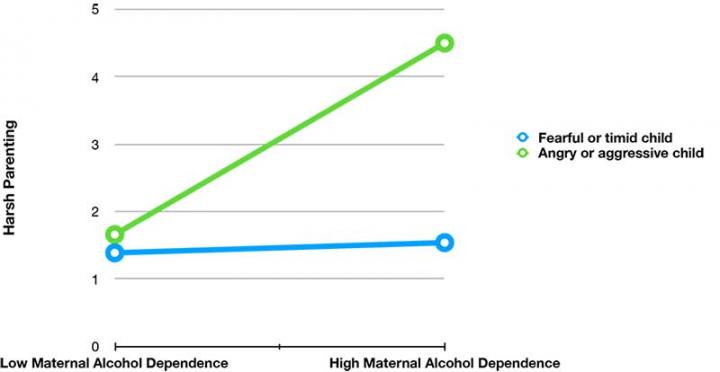 IMAGE: The incidence of harsh parenting is highest for mothers with significant alcohol-related impairments whose children show high levels of frustration, anger, or aggression.

Not surprisingly, parents with substance use disorders often struggle with parenting and frequently have strained relationships with their children. Moreover, research has solidly demonstrated that the children of these parents are more likely to develop behavioral problems, antisocial behavior, aggression, mood disorders, anxiety, and later use substances themselves.

For those who treat affected families, however, the findings have left a lot of questions unanswered.

First, while parents with substance use disorders are more likely to treat their children harshly, they don't do so all the time. What are the triggers?

Second, how can substance-dependent mothers and their medical care providers predict difficulties across challenging parenting contexts?

Greater insight into these questions is critical, given the prevalence of alcohol dependency and its harmful effects on child development. Roughly one in eight children in the US lives with a parent who struggles with a substance use disorder. Specifically, alcohol dependence among mothers of childrearing age has been steadily increasing. Research has shown that the effects of alcohol are exaggerated among women, causing reduced stress tolerance and interfering with many of the complex cognitive processes needed for sensitive and supportive parenting.

The triggers of harsh parenting

A new study by a team of University of Rochester and University of Minnesota psychologists, published in the journal Development and Psychopathology, makes considerable progress towards answering both questions.

Lead author Debrielle Jacques, a Rochester doctoral student in psychology, observed mothers and their children in two contexts: during free play and during a cleanup task. Coders then rated each of the mothers' interactions on a nine-point scale measuring the degree of harshness. (The researchers also collected observations about the child's temperament through another set of experiments, and assessed the mother's alcohol dependence with the help of a widely-used diagnostic interview schedule.) The study focused on mostly ethnic minority, low-income families, following a high-risk sample of 201 moms with their two-year-old children over a one-year period, observing behaviors during nine separate visits to a research laboratory.

What exactly is harsh parenting? As the researchers define it, it can include nonverbal communication, such as angry or contemptuous facial expressions and menacing or threatening body postures; emotional expression, such as irritability, lack of patience and sensitivity, sarcastic comments, and curt answers; or rejection, such as actively ignoring the child, showing contempt or disgust for the child or the child's behavior, or denying the child's needs.

Jacques and her co-authors--Rochester psychology professors Melissa Sturge-Apple and Patrick Davies, and Dante Cicchetti, a professor and the research director at the University of Minnesota's Institute of Child Development, found that:

Alcohol-dependent mothers act more harshly when disciplining, but not when playing with their child.
Alcohol-dependent mothers used harsher discipline when their child is highly frustrated, but not when their child is sad or fearful.
A child's temperament plays a direct role in how mothers react: when children express intense negative emotions such as defiance and anger, or aggressive traits, mothers are more likely to react harshly.
A mother's alcohol dependence is a significant predictor of harsh parenting over time--well above other parenting risk factors, such as mental disorders, the mother's age, and family income. Specifically, harsh parenting among non-alcohol-dependent mothers decreased by 36 percent over the one-year study period; however, among alcohol-dependent mothers harsh parenting increased by about 9 percent during that same time.
Mothers with greater psychological-behavioral difficulties stemming from alcohol impairment--who also have children with higher levels of negative emotions, behaviors, and characteristics--show higher levels of harsh parenting over time. Mothers with alcohol-related impairments were approximately 66 percent more likely to become harsher over time compared to mothers without alcohol-related impairments.

Sturge-Apple, who serves as Jacques' doctoral advisor and is a Rochester vice provost and University dean of graduate education, observes that alcohol dependence "may disrupt the cognitive-emotional processes that regulate a parent's response to a child who is behaving in a challenging or difficult manner. That's why it can be difficult for alcohol-dependent mothers to respond to angry and demanding children with noncoercive strategies."

Jacques points out that during the cleanup task, the mother is faced with the primary goal to get the child to listen; but often children won't listen and instead respond in their own temperamental ways.

"Now, she also has to combat the way the child is responding to her--posing an additional demand. For moms who have a lot of alcohol-related impairments, we know that they find parenting stressful anyway, which makes this a kind of triple stresser," says Jacques.

The team hopes their study will shed light on the unique parenting challenges faced by black and Hispanic mothers who suffer from alcohol-related issues--"a particularly vulnerable group that has been missing from the research spotlight," notes Jacques, who identifies as Latina and whose research focuses on high-risk, ethnic-minority mothers. According to Jacques these women often come to motherhood with higher levels of underlying trauma. "These women might have experienced, even from an earlier age, higher rates of sexual abuse, emotional, or physical abuse--trauma that we may not see at these rates in white women."

Because few studies have focused on mothers from these minority backgrounds, resources have not been tailored to their specific needs and struggles as parents, the team says. That's why the researchers see their study as a significant first step not only in understanding when and why these mothers behave harshly, but also how to help them improve interactions with their children and ultimately become better parents.

"It's important to look at how alcohol-dependent mothers operate in different caregiving situations. Because if you are doing a caregiving intervention you need to know which specific situations to target," says Jacques.