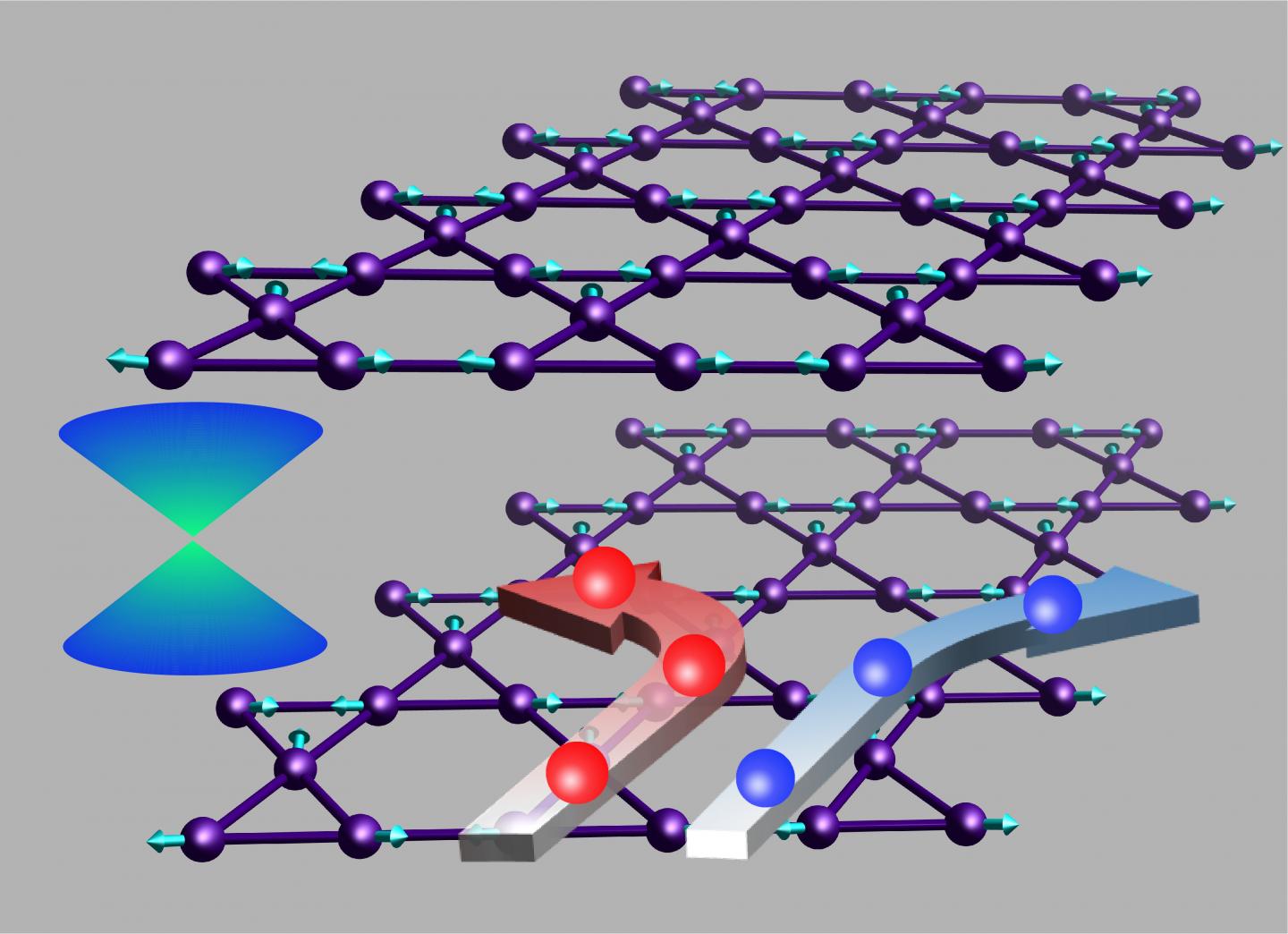 IMAGE: Schematic of the triangular vanadium net (purple balls) with magnetic moments (turqouise arrows) and the anomalous hall effect (red balls are electrons and blue are holes) from the Dirac quasiparticles...

The fields of condensed matter physics and material science are intimately linked because new physics is often discovered in materials with special arrangements of atoms. Crystals, which have repeating units of atoms in space, can have special patterns which result in exotic physical properties. Particularly exciting are materials which host multiple types of exotic properties because they give scientists the opportunity to study how those properties interact with and influence each other. The combinations can give rise to unexpected phenomena and fuel years of basic and technological research.

In a new study published in Science Advances this week, an international team of scientists from the USA, Columbia, Czech Republic, England, and led by Dr. Mazhar N. Ali at the Max Planck Institute of Microstructure Physics in Germany, has shown that a new material, KV3Sb5, has a never-seen-before combination of properties that results in one of the largest anomalous Hall effects (AHEs) ever observed; 15,500 siemens per centimeter at 2 Kelvin.

Dirac physics, in this context, relates to the fact that the electrons in KV3Sb5 aren't just your normal run-of-the-mill electrons; they are moving extremely fast with very low effective mass. This means that they are acting "light-like"; their velocities are becoming comparable to the speed of light and they are behaving as though they have only a small fraction of the mass which they should have. This results in the material being highly metallic and was first shown in graphene about 15 years ago.

The "frustrated magnetism" arises when the magnetic moments in a material (imagine little bar magnets which try to turn each other and line up North to South when you bring them together) are arranged in special geometries, like triangular nets. This scenario can make it hard for the bar magnets to line up in way that they all cancel each other out and are stable. Materials exhibiting this property are rare, especially metallic ones. Most frustrated magnet materials are electrical insulators, meaning that their electrons are immobile. "Metallic frustrated magnets have been highly sought after for several decades. They have been predicted to house unconventional superconductivity, Majorana fermions, be useful for quantum computing, and more," commented Dr. Ali.

Structurally, KV3Sb5 has a 2D, layered structure where triangular vanadium and antimony layers loosely stack on top of potassium layers. This allowed the authors to simply use tape to peel off a few layers (a.k.a. flakes) at a time. "This was very important because it allowed us to use electron-beam lithography (like photo-lithography which is used to make computer chips, but using electrons rather than photons) to make tiny devices out of the flakes and measure properties which people can't easily measure in bulk." remarked lead author Shuo-Ying Yang, from the Max Planck Institute of Microstructure Physics. "We were excited to find that the flakes were quite stable to the fabrication process, which makes it relatively easy to work with and explore lots of properties".

Armed with this combination of properties, the team first chose to look for an anomalous Hall effect (AHE) in the material. This phenomenon is where electrons in a material with an applied electric field (but no magnetic field) can get deflected by 90 degrees by various mechanisms. "It had been theorized that metals with triangular spin arrangements could host a significant extrinsic effect, so it was a good place to start," noted Yang. Using angle resolved photoelectron spectroscopy, microdevice fabrication, and a low temperature electronic property measurement system, Shuo-Ying and co-lead author Yaojia Wang (Max Planck Institute of Microstructure Physics) were able to observe one of the largest AHE's ever seen.

The AHE can be broken into two general categories: intrinsic and extrinsic. "The intrinsic mechanism is like if a football player made a pass to their teammate by bending the ball, or electron, around some defenders (without it colliding with them)," explained Ali. "Extrinsic is like the ball bouncing off of a defender, or magnetic scattering center, and going to the side after the collision. Many extrinsically dominated materials have a random arrangement of defenders on the field, or magnetic scattering centers randomly diluted throughout the crystal. KV3Sb5 is special in that it has groups of 3 magnetic scattering centers arranged in a triangular net. In this scenario, the ball scatters off of the cluster of defenders, rather than a single one, and is more likely to go to the side than if just one was in the way." This is essentially the theorized spin-cluster skew scattering AHE mechanism which was demonstrated by the authors in this material. "However the condition with which the incoming ball hits the cluster seems to matter; you or I kicking the ball isn't the same as if, say, Christiano Ronaldo kicked the ball," added Ali. "When Ronaldo kicks it, it is moving way faster and bounces off of the cluster with way more velocity, moving to the side faster than if just any average person had kicked it. This is, loosely speaking, the difference between the Dirac quasiparticles (Ronaldo) in this material vs normal electrons (average person) and is related to why we see such a large AHE," Ali laughingly explained.

These results may also help scientists identify other materials with this combination of ingredients. "Importantly, the same physics governing this AHE could also drive a very large spin Hall effect (SHE) - where instead of generating an orthogonal charge current, an orthogonal spin current is generated," remarked Wang. "This is important for next-generation computing technologies based on an electron's spin rather than its charge".

"This is a new playground material for us: metallic Dirac physics, frustrated magnetism, exfoliatable, and chemically stable all in one. There is a lot of opportunity to explore fun, weird phenomena, like unconventional superconductivity and more," said Ali, excitedly.