This news release is available in German.

We want it cozy and warm in our homes when the thermometer outside gets down into the minus area. Especially with older buildings, however, the money we pay for heat ends up out the window. The fault lies hidden in incorrect insulation, or at spots around windows or ceiling joints that are not sealed. These weak points cannot be perceived from outside – unless you are viewing the building though the lens of an infrared camera. This type of camera is equipped with specialized sensors that distinguish the temperature differences of the building. Thermal bridges, where the heat penetrates faster to the outside, become immediately visible in these thermo- graphic images of buildings. The only catch: you need detectors that are highly sensitive in the far-infrared region to detect very small temperature differences. However, these detectors need to be permanently cooled to a frosty -310 degrees Fahrenheit (-190° C). The cameras are very large, heavy, and consume a lot of energy as a result of this additional cooling.

Instant images on the PC 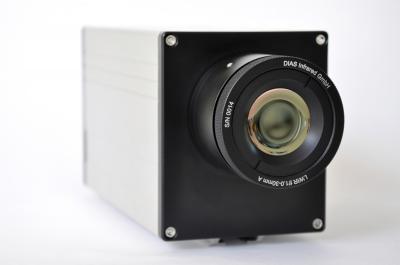 Scientists of the Fraunhofer Institute for Microelectronic Circuits and Systems IMS are developing infrared sensors for the far-infrared region that also operate at room temperature. A prototype camera at the Institute in Duisburg, Germany, will likely simplify product development based on these room-termperature detectors in future. "It is very time-consuming and expensive to create an image from a new detector. The sensor must first be adapted to the given camera model. We want to reduce this effort by offering a suitable camera as a testing platform for our detectors that generates images on a PC immediately," explains Dr. Dirk Weiler from the Fraunhofer IMS.

The EVAL-IRFA camera doesn't just prepare the infrared photo material faster. While commercially available infrared cameras have integreated image processing that typcially sharpens temperature edges or smoothes surfaces, the model from the Duisburg researchers presents a true image of every pixel. While it makes sense to enhance the images during regular operations later on, doing so during the R&D phase is counter- productive. The performance and operation can only be evaluated and adapted to a given application with the help of the raw detector data. "Since our customers come from very different application areas, they often times have very specific requirements for the sensor – in relation to the optical or temperature resolutions, for example," explains Weiler. "If we tweek one or the other adjustment during the development phase here, the customer can immediate check the result in the actual image using our camera."

The researchers in Duisburg are looking forward to presenting their camera during Sensor & Test in Nuremberg, from 3-5 June this year. The goal is to introduce room-temperature IR detectors into applications faster. Weiler is certain the demand is there: "Our technology opens up innovations especially for mobile applications, since it leads to smaller, lighter, and more energy-efficient camera systems." This is of interest not just in themography for buildings. IR cameras installed as part of driver assistance systems could improve road safety, since people and animals on unlighted roadways can be detected at large distances – without high beams blinding oncoming traffic. Infrared cameras could also be valuable in building surveillance or monitoring production machinery.