As a way to fight climate change, not all soils are created equal 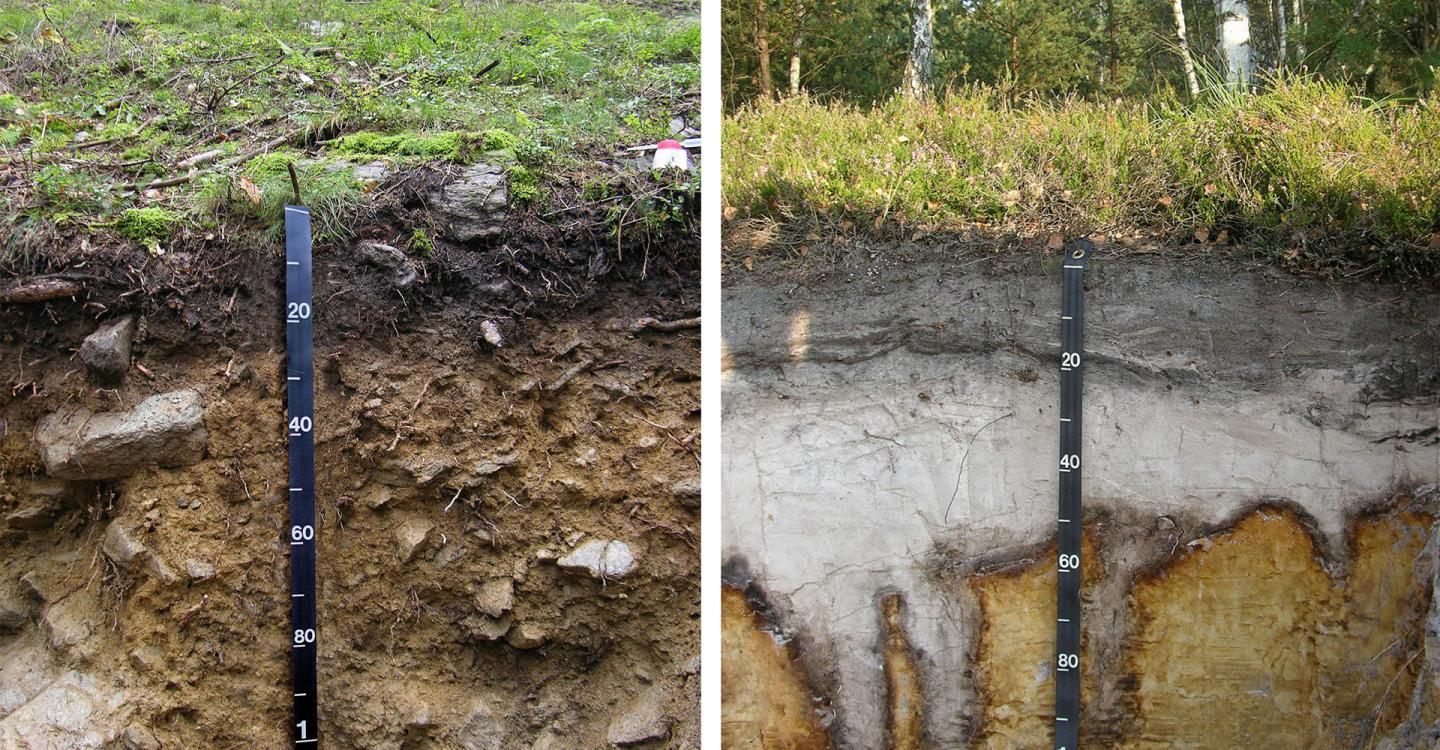 IMAGE: On the left is cambisol, a type of grassland soil, and on the right is podzol, an example of a forest soil.

As the planet warms due to excess carbon dioxide in the atmosphere, a solution for drawing down that carbon - or at least a major part of it - lies silently below us.

Soil organic matter - made of decomposing plant, animal and microbial tissue - is what distinguishes healthy, vibrant soil from just plain dirt. Making up about 3% of productive agricultural soils, soil organic matter is an effective "carbon sink" that can store, in the ground, the carbon dioxide plants pull from the atmosphere. Along with reducing fossil fuel emissions, employing soils as vast carbon sinks is considered a key strategy in combating climate change.

A set of studies led by CSU soil scientist Francesca Cotrufo offers a newly nuanced understanding of different soil organic matter components that can be increased through varied management strategies. Publishing in Global Change Biology, Cotrufo and co-authors Jocelyn Lavallee and Jennifer Soong establish a framework for classifying soil organic matter into two broad categories that are fundamentally different in origin and makeup. In a related study in Nature Geoscience, Cotrufo led an experimental and statistical survey of these soil organic matter components across European forests and grasslands.

Only by recognizing the diversity of soil organic matter can science, government and agriculture move forward with carbon sequestration to help reverse the tide of climate change while increasing the health of our soils, the scientists say.

"Because of thousands of years of historical land use and conventional agriculture, we have contributed to consuming soil organic matter and emitting carbon from the soil into the atmosphere," says Cotrufo, a professor in the Department of Soil and Crop Sciences and senior scientist in the Natural Resource Ecology Laboratory. "Now, we have the opportunity to put it back."

That opportunity, Cotrufo and colleagues say, comes with thinking of soil organic matter as having two major components.

The first is called "particulate organic matter," made up of lightweight, partly decomposed plants and fungi residues that are short-lived and not well protected.

The second is "mineral-associated organic matter," largely made of byproducts of the decomposition of microbes that chemically bind to minerals in the soil. This type of matter is more resilient and able to persist in the ground for centuries.

Insights around the formation of these different classes of soil sprouted from previous work Cotrufo published in 2013, establishing a "microbial-efficiency mineral-stabilization framework" that transformed the way scientists understand how organic matter persists in soils. Cotrufo and colleagues proposed that microbial decomposition of plant matter can act as a stabilizer for soil organic matter; it was previously thought that preserving carbon in soil would require halting decomposition.

Cotrufo calls particulate organic matter the "checking account" of soils. It turns over continuously and supports nutrient cycling but requires regular deposits to stay vital. Mineral-associated organic matter, then, is the "savings account": it gets a smaller fraction of deposits but is inherently more stable.

Conventional agriculture, Cotrufo says, has caused us to exhaust our checking account and start living off our savings. This happens because of farms selecting few crops with minimal root production, harvesting much of the above-ground biomass, and maintaining few and chemically homogenous plant inputs into the soils.

By taking cues from nature and understanding how natural prairies and forests manage their soil checking and savings accounts, more forward-thinking strategies are possible for upending farming and land use to be more sustainable, Cotrufo says. To regenerate healthy soil that can capture excess carbon, both types of soil pools must be augmented, she adds.

Writing in Nature Geoscience, the researchers showed that European grasslands and forests with symbiotic partnerships between fungi and plants store more soil carbon in nitrogen-demanding mineral-associated organic matter. But forests that depend on symbiosis with other fungal species store more carbon in particulate organic matter, which is more vulnerable to disturbance, but has a lower nitrogen demand and can accumulate carbon indefinitely.

Cotrufo will continue researching how particulate and mineral-associated soil organic matter are distributed, with plans to incorporate U.S. land surveys into her datasets. Cotrufo was also recently named the Nutrien Distinguished Scholar of Agricultural Sciences at CSU, a one-year award of $12,000 reserved for distinguished faculty who are making significant impacts in their fields.

Cotrufo recently gave a talk on soil as "humanity's capital" at The Land Institute, where she provided insight into her early stake in soil science, and how the field has evolved over her career.