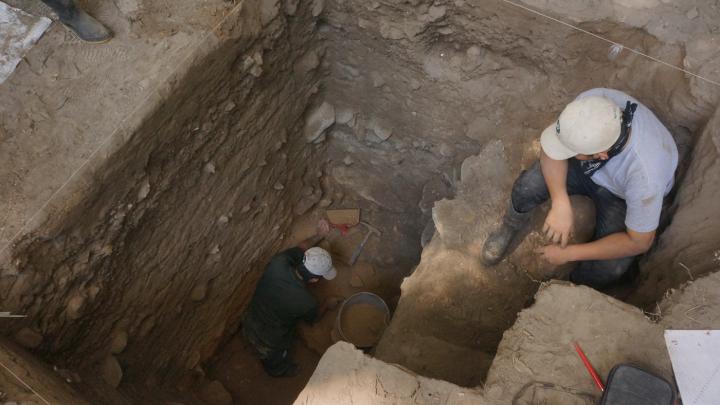 IMAGE: Excavations showing the stratigraphic sequence from the late Pleistocene to the modern in one excavation unit at Saki Tzul rockshelter

The "unparalleled" discovery of remarkably well-preserved ancient skeletons in Central American rock shelters has shed new light on when maize became a key part of people's diet on the continent.

Until now little was known about when humans started eating the crop, now a staple of meals around the globe that shapes agricultural landscapes and ecosystem biodiversity.

The rare human remains, found in the Maya Mountains of Belize, buried during the last 10,000 years, has allowed experts to date when maize became a major part of people's diets in the region for the first time.

Radiocarbon dating of the skeletal samples shows the transition from pre-maize hunter-gatherer diets, where people consumed wild plants and animals, to the introduction and increasing reliance on the crop. Maize made up about a third of people's diets in the area by 4,700 years ago, rising to 70 per cent 700 years later.

Maize was domesticated from teosinte, a wild grass growing in the lower reaches of the Balsas River Valley of Central Mexico, around 9,000 years ago. There is evidence maize was first cultivated in the Maya lowlands around 6,500 years ago, at about the same time that it appears along the Pacific coast of Mexico.

Dr Mark Robinson, from the University of Exeter, who co-directed field excavations, said: "The humid environment means it's extremely rare to find older human remains that are so well preserved in the tropics.

"This is the only example of a burial site in the Neotropics used repeatedly for 10,000 years, giving us an unparalleled opportunity to study dietary change over a long time period, including the introduction of maize into the region. This is the first direct evidence to show when the change in people's diets occurred and the rate at which maize increased in economic and dietary importance until it became fundamental to peoples dietary, economic, and religious lives."

Experts measured the carbon and nitrogen in the bones of 44 skeletons, which gave information about people's diet. The remains include male and female adults and children providing a wholistic sample of the population, . The oldest remains date from between 9,600 and 8,600 years ago, with continued burials occurring until 1,000 years ago.

The analysis shows the oldest remains were people who ate herbs, fruits and nuts from forest trees and shrubs, along with meat from hunting terrestrial animals.

By 4,000 years ago, the population was reliant on maize, with the crop forming 70% of their diet. The increase in consumption of maize protein was accompanied by a reduction in the consumption of animal protein. Maize became a dietary staple at a time of broad continental population change, increases in social complexity and social hierarchy, and major subsequent environmental transformations. The study shows that as people ate more maize the associated farming led to an increase in forest clearing, burning and soil erosion across the Maya lowlands.

The spread of maize agriculture across the Americas was likely linked to the spread of distinct cultures, technologies, and languages. By the time the highly complex, monumental Maya civilisation developed 2,000 years ago, maize was central to lifeways and cosmology, with their creation story recording that the Maya are made out of maize.