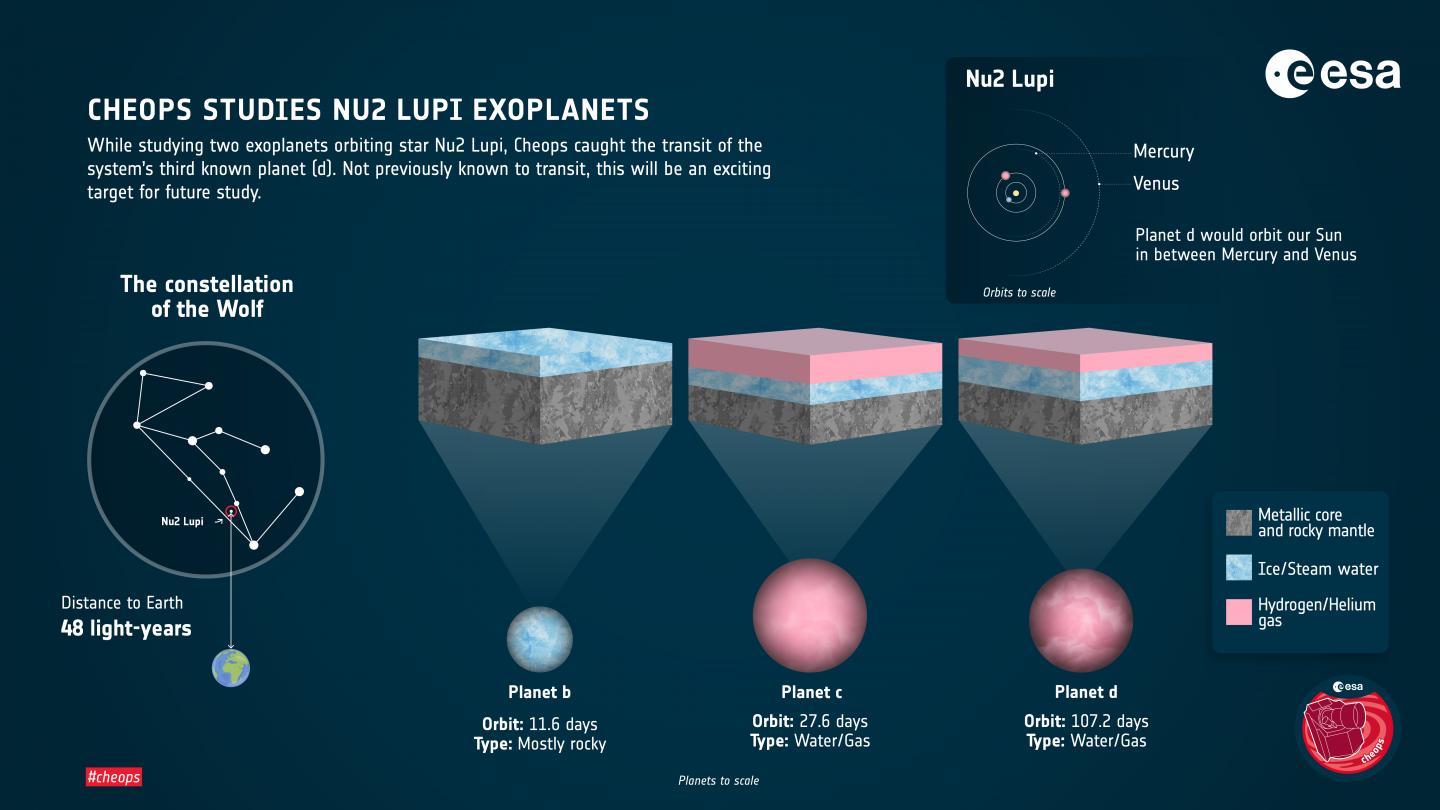 This bright, Sun-like star is located just under 50 light-years away from Earth in the constellation of Lupus (the Wolf), as shown to the left of the frame, and is known to host three planets (named 'b', 'c' and 'd', with the star deemed to be object 'A'). The relative sizes, orbital periods, and possible compositions of these three planets are depicted to the centre and lower right of the frame, while planet d's comparative position within our solar system is shown to the upper right (as defined by the amount of incident light it receives from its star, Nu2 Lupi).

Cheops explored this planetary system to better characterize its two inner planets, b and c, as these were known to pass in front of their host star (a 'transit'). However, while doing so, Cheops unexpectedly spotted planet d also transiting Nu2 Lupi -- the first time an exoplanet with a period of over 100 days has been spotted transiting a star bright enough to be visible to the naked eye.

Transits create the valuable opportunity to study a planet's atmosphere, orbit, size and interior, and allow scientists to compare multiple planets around the same star to understand how they have formed and evolved. The transiting behavior of all three planets of the Nu2 Lupi system enabled Cheops to refine the planetary characteristics and compositions depicted here.

While exploring two exoplanets in a bright nearby star system, ESA's exoplanet-hunting Cheops satellite has unexpectedly spotted the system's third known planet crossing the face of the star. This transit reveals exciting details about a rare planet "with no known equivalent", say the researchers.

The discovery is one of the first results from ESA's Cheops (CHaracterising ExOPlanet Satellite), and the first time an exoplanet with a period of over 100 days has been spotted transiting a star that is bright enough to be visible to the naked eye.

Named Nu2 Lupi, this bright, Sun-like star is located just under 50 light-years away from Earth in the constellation of Lupus (the Wolf). In 2019, the High Accuracy Radial velocity Planet Searcher (HARPS) at the ESO 3.6-metre telescope in Chile discovered three exoplanets (named 'b', 'c' and 'd', with the star deemed to be object 'A') in the system, with masses between those of Earth and Neptune and orbits lasting 11.6, 27.6 and 107.6 days. The innermost two of these planets - b and c - were subsequently found to transit Nu2 Lupi by NASA's Transiting Exoplanet Survey Satellite (TESS), making it one of only three naked-eye stars known to host multiple transiting planets.

"Transiting systems such as Nu2 Lupi are of paramount importance in our understanding of how planets form and evolve, as we can compare several planets around the same bright star in detail," says Laetitia Delrez of the University of Liège, Belgium, and lead author of the new finding.

"We set out to build on previous studies of Nu2 Lupi and observe planets b and c crossing the face of Nu2 Lupi with Cheops, but during a transit of planet c we spotted something amazing: an unexpected transit by planet 'd', which lies further out in the system."

Planetary transits create a valuable opportunity to study a planet's atmosphere, orbit, size and interior. A transiting planet blocks a tiny but detectable proportion of its star's light as it crosses in front of its star - and it was this drop in light that led Laetitia and colleagues to their discovery. As long-period exoplanets orbit so far from their stars, the chances of seeing one during a transit are incredibly low, making Cheops' finding a real surprise.

Using the high-precision capabilities of Cheops, planet d was found to be about 2.5 times the radius of Earth, confirmed to take just over 107 days to loop once around its star and, using archival observations from ground-based telescopes, found to have a mass of 8.8 times that of Earth.

"The amount of stellar radiation reaching planet d is also mild in comparison to many other discovered exoplanets; in our Solar System, Nu2 Lupi d would orbit between Mercury and Venus," adds co-author David Ehrenreich of the University of Geneva, Switzerland. "Combined with its bright parent star, long orbital period, and suitability for follow-up characterisation, this makes planet d hugely exciting - it is an exceptional object with no known equivalent, and sure to be a golden target for future study."

Most long-period transiting exoplanets discovered to date have been found around stars that are too faint to allow detailed follow-up observations, meaning that little is known about their planets' properties. Nu2 Lupi, however, is bright enough to be an attractive target for other powerful telescopes based in space -- such as the NASA/ESA Hubble Space Telescope or forthcoming NASA/ESA/CSA James Webb Space Telescope -- or large observatories on the ground.

"Given its overall properties and orbit, this makes planet d a uniquely favourable target for studying an exoplanet with a mild-temperature atmosphere around a star similar to the Sun," says Laetitia.

By combining new Cheops data with archival data from other observatories, the researchers were able to accurately determine the mean densities of all of Nu2 Lupi's known planets, and put strong constraints on their possible compositions.

They found planet b to be mainly rocky, while planets c and d appear to contain large amounts of water enshrouded in envelopes of hydrogen and helium gases. In fact, planets c and d contain far more water than Earth: a quarter of each planet's mass is made up of water, compared to less than 0.1% for Earth. This water, however, is not liquid, instead taking the form of high-pressure ice or high-temperature steam.

"While none of these planets would be habitable, their diversity makes the system even more exciting, and a great future prospect for testing how these bodies form and change over time," says ESA Cheops project scientist Kate Isaak. "There is also the potential to search for rings or moons in the Nu2 Lupi system, as the exquisite precision and stability of Cheops could allow detection of bodies down to roughly the size of Mars. "

Cheops is designed to collect ultra-high precision data of individual stars known to host planets, rather than sweeping more generally for possible exoplanets around many stars - and this focus and precision is proving exceptionally useful in understanding the star systems around us.

"These exciting results demonstrate once again the huge potential of Cheops," adds Kate. "Cheops will allow us not just to better understand known exoplanets, as shown in this and other early results from the mission, but also to discover new ones and reveal their secrets."