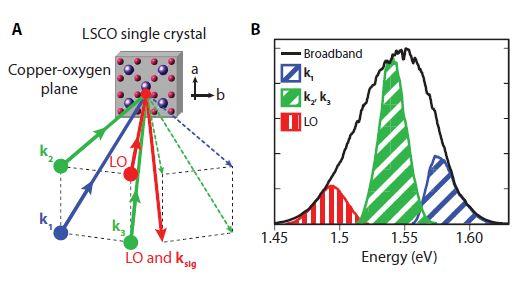 Exciting the material with an ultrafast (

This kind of coherent interaction, reported here for the first time, is the root of many intriguing and poorly-understood phenomena displayed by quantum materials.

It is one of the first applications of multidimensional spectroscopy to study of correlated electron systems such as high-temperature superconductors.

However, controlling these properties requires an improved understanding of the ways in which macroscopic behaviour emerges in complex materials with strong electronic correlations.

Such macroscopic properties emerge out of microscopic complexity, rooted in the competing interactions between the degrees of freedom (charge, lattice, spin, orbital, and topology) of electronic states.

While measurements of the dynamics of excited electronic populations have been able to give some insight, they have largely neglected the intricate dynamics of quantum coherence.

In this new study, researchers applied multidimensional coherent spectroscopy to the challenge for the first time, utilising the technique's unique capability to differentiate between competing signal pathways, selectively exciting and probing low-energy excitations.

This coherence has unusual properties, lasts a surprisingly 'long' time of around 500 femtoseconds, and originates from a quantum superposition of excited states within the crystal.

2D spectrum showing energy difference between the states in the quantum superposition, shown before, during and after pulse overlap

"We found a strong correlation between the energy of this coherence and the optical energy of the emitted signal, which indicates a special coherent interaction between the states at low and high energy in these complex systems," says study author Jeff Davis (Swinburne University of Technology).

Because the number of available excitations affects the band structure of a crystal, the effective energy structure changes transiently during measurement, which links low-energy excitations and optically excited electronic states.

As well as representing a major advancement in ultrafast spectroscopy of correlated materials, the work has wider significance in optics/photonics, chemistry, nanoscience, and condensed-matter science.

Persistent coherence of quantum superpositions in an optimally doped cuprate revealed by 2D spectroscopy was published in Science Advances in February 2020.

The authors acknowledge funding by the Australian Research Council (Future Fellowship and Centres of Excellence programs). Work was conducted at the Centre for Quantum and Optical Science (Swinburne University of Technology), Ruhr University (Germany) and University of Oxford (UK).

Within FLEET, Jeff Davis uses ultrafast spectroscopy to study and control the microscopic interactions in 2D materials and how they lead to macroscopic behaviour.

In FLEET's third research theme, light-transformed materials, systems are temporarily driven out of thermal equilibrium to investigate the qualitatively different physics displayed and new capabilities for dynamically controlling their behaviour.

FLEET is an Australian Research Council-funded research centre bringing together over a hundred Australian and international experts to develop a new generation of ultra-low energy electronics.