Carbon nanotubes have a multitude of unusual properties which make them promising candidates for optoelectronic components. However, so far it has proven extremely difficult to analyze or influence their optic and electronic properties. A team of researchers headed by Professor Alexander Holleitner, a physicist at the Technische Universitaet Muenchen and member of the Cluster of Excellence Nanosystems Munich (NIM), has now succeeded in developing a measurement method allowing a time-based resolution of the so-called photocurrent in photodetectors with picosecond precision.

"A picosecond is a very small time interval," explains Alexander Holleitner. "If electrons traveled at the speed of light, they would make it almost all the way to the moon in one second. In a picosecond they would only cover about a third of a millimeter." This new measurement technique is about a hundred times faster than any existing method. It allowed the scientists headed by Professor Alexander Holleitner to measure the precise speed of electrons. In the carbon nanotubes the electrons only cover a distance of about 8 ten-thousandths of a millimeter or 800 nanometers in one picosecond.

At the heart of the photodetectors in question are carbon tubes with a diameter of about one nanometer spanning a tiny gap between two gold detectors. The physicists measured the speed of the electrons by means of a special time-resolved laser spectroscopy process – the pump-probe technique. It works by exciting electrons in the carbon nanotube by means of a laser pulse and observing the dynamics of the process using a second laser. 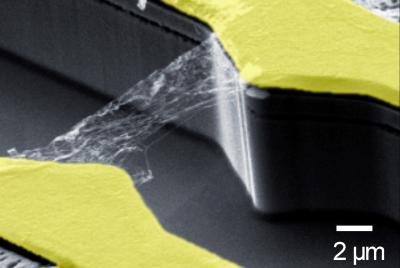 The insights and analytic opportunities made possible by the presented technique are relevant to a whole range of applications. These include, most notably, the further development of optoelectronic components such as nanoscale photodetectors, photo-switches and solar cells.