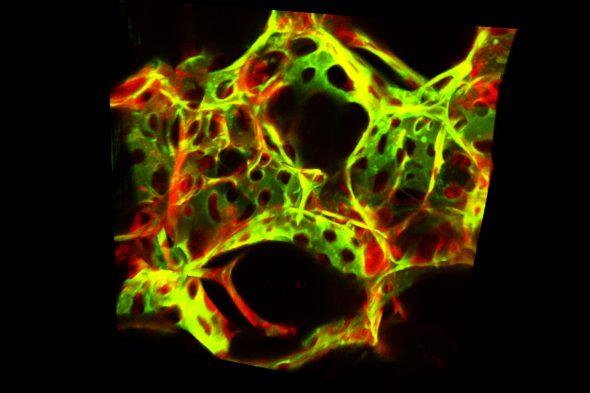 Researchers from the University of Illinois at Chicago have discovered that endothelial cells -- those that create the inner lining of blood vessels -- have unique genetic signatures based on their location in the body.

Their study, which is published in the journal eLife, used a genetic mouse model to compare endothelial cells in their natural organ environment. The researchers first looked at healthy mice and compared how genes were expressed in endothelial cells from heart, lung and brain tissues. Next, they studied the blood vessel endothelial cells of unhealthy mice -- those exposed to a bacterial toxin, which mimicked inflammation in the whole body.

"One of the most surprising findings of this study is that blood vessel endothelial cells in the brain express genes that were previously thought to be primarily found in neurons -- such as the genes involved in the transport of neurotransmitters and synaptic vesicles," said Dr. Jalees Rehman, UIC professor of medicine, pharmacology and bioengineering at the College of Medicine.

"We have had anecdotal descriptions that blood vessel cells function differently in each organ for some time, but newer genetic tools allowed us to perform a global analysis of thousands of genes in the blood vessels of these vital organs," Rehman said.

Rehman said the results of this study can be used to inform the bioengineering of blood vessels that are specific to different organs and that the findings suggest there are untapped avenues for developing more targeted treatments.

"Our findings provide organ-specific blood vessel 'ZIP codes' for the potential delivery of drugs to specific tissues," Rehman said. "Right now, most treatments for vascular disease target all blood vessels regardless of where they are. Imagine if we could develop more effective treatments to uniquely improve the function of blood vessels in the heart or the brain?"

Rehman said that this research suggests that blood vessels may play previously unrecognized roles in some neurological diseases such as Alzheimer's disease and other forms of dementia because the brain's endothelial cells expressed genes involved in cognitive function.