Let’s say a college student enters a classroom to take a test. She probably already has an idea how she will do—knowledge available before she actually takes out a pencil. But do animals possess the same ability to think about what they know or don’t know?

A new study by researchers from the University of Georgia, just published in the journal Current Biology, shows that laboratory rats do. It’s the first demonstration that any non-primate knows when it doesn’t know something, and it could open the way to more in-depth studies about how animals—and humans—think. 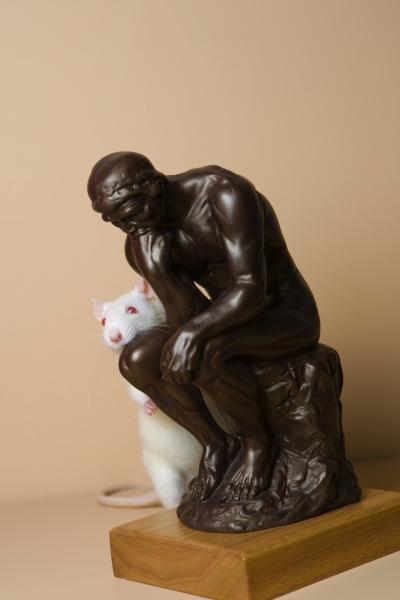 A new study by researchers from the University of Georgia, just published in the journal Current Biology, shows that laboratory rats possess the ability to think about what they know or don’t know. It’s the first demonstration that any non-primate knows when it doesn’t know something, and it could open the way to more in-depth studies about how animals -- and humans -- think.Credit: Dot Paul, University of Georgia

"This kind of research may change how we think about cognition and memory in animals," said Jonathon Crystal, an associate professor of psychology in UGA’s Franklin College of Arts and Sciences.

Crystal’s co-author on the paper is Allison Foote, a graduate student in the department of psychology at UGA.

Researchers have believed for some time that people and non-human primates are capable of "metacognition"—reasoning or thinking about one’s own thinking. There have been studies on birds about this kind of thinking process, but results thus far have been inconclusive. The new study is the first that shows a non-primate species has metacognition—a proposal that may well be controversial.

The study involved what is called a "duration-discrimination" test—offering rats rewards for classifying a signal as either short or long. As in most such tests, the "right" answer led to a large food reward, while a "wrong" answer led to no reward at all. The twist, however, is that before taking the duration test, the rats were given the chance to decline the test completely. If they made that choice, they got a small reward anyway.

"If rats have knowledge about whether they know or don’t know the answer to the test, we would expect them to decline most frequently on difficult tests," said Crystal. "They would also show the lowest accuracy on difficult tests that they can’t decline. Our data showed both to be true, suggesting the rats have knowledge of their own cognitive states."

It’s easy to find out when humans believe they know or don’t know the answer to a task or test. You just ask them. With non-verbal animals, it is necessary to used experimental conditions in which a subject can demonstrate knowledge of a cognitive state through its behavior.

The tests asked the rats to discriminate among a number of responses. Sometimes, the choices were relatively easy, and the rats were able to make a choice that generated a large reward. But often, the choices were quite difficult, and the animals faced a dilemma: Should they continue and take a chance on the test with the risk of no food reward, or should they just bail out and take the small, but guaranteed reward?

One part of the problem, for example, was presenting the rats with a sound and asking them to determine if it was "short" or "long." When the sounds were near the extremes of either end, discriminating was easy. But for sounds with durations in the mid-range, the rats found it extremely hard to know if they were "short" or "long." So what should they do: Guess and possibly be wrong, or simply refuse to take the test and get a small reward?

"Our research showed that the rats know when they don’t know the answer to a question," said Crystal.

The results of the just-published study present a dilemma for those who had previously believed that only primates could achieve metacognition. But it also presents a rodent model that should allow researchers to understand better what animals are "cognitively sophisticated" and why.

The research will also open new lines of inquiry about the underlying neural mechanisms of this ability. Reflecting on one’s own mental experiences is a defining feature of human existence, and the demonstration of metacognition in rats suggests that this type of cognition may be widespread among animals. Does it mean, for example, that rats are "conscious," and could that also be true of other non-primates?

Written from a news release by University of Georgia.