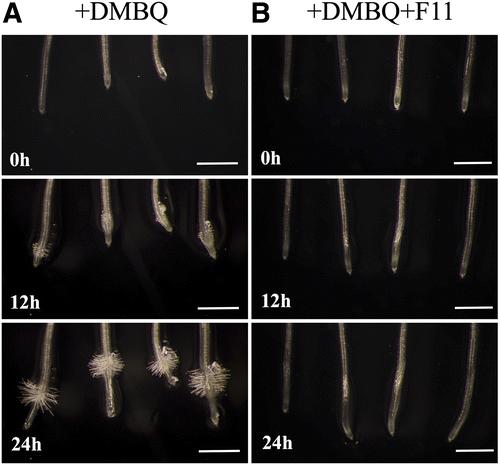 Parasitic weeds are among the world's most economically damaging agricultural pests. They use an organ called the haustorium to build connections with host plants and draw nutrients from them.

While the majority of research on parasitic plant biology and control of root parasitic weeds has been heavily focused on seed germination, scientists at UC Davis focused on the development of haustorium and published their findings in Phytopathology.

Yoder and his colleagues demonstrated that disrupting redox signaling can effectively prevent haustorium initiation and some inhibitor chemicals do not affect root growth, making them a potential growth method against parasitic weeds.

Their research uniquely screens the largest number of chemicals directly on parasitic plants. They also did a thorough search of the chemical and physical properties of the chemicals in the redox library and DMBQ analog library from PubChem and EPA databases. This information is available in the supplemental files included with their article, "Small-Molecule Screens Reveal Novel Haustorium Inhibitors in the Root Parasitic Plant Triphysaria versicolor" published in the November issue of Phytopathology.

Additional research on specific control of redox reactions during haustorium development is still needed to make use of discoveries in this article as potential control methods against parasitic weeds.