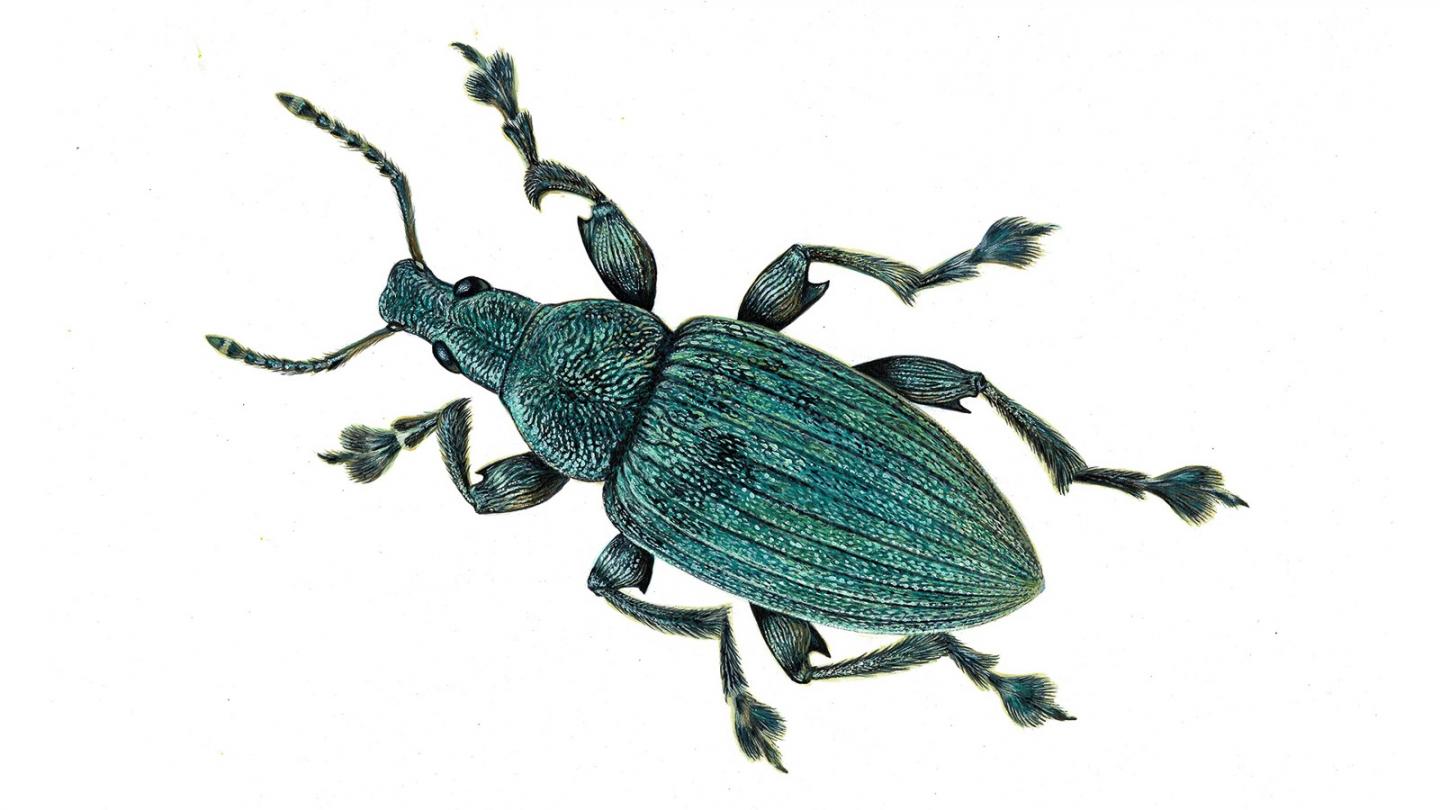 IMAGE: An illustration of the types of weevils studied for this research.

Many colors in nature are produced using pigments that absorb light to varying degrees and reflect the rest, creating shades of red and brown, for instance. Our clothes and other objects are colored the same way, using chemical dyes. But the iridescent blue and green colors found on insects and other animals are different. These organisms have somehow evolved the ability to grow complex nanostructures that scatter or diffract light to produce metallic-looking colors.

Scientists are not sure how this surprising process evolved over time, but a team of researchers from Singapore and Ireland are determined to find out. Recently they came a giant step closer, using the powerful X-rays at the Advanced Photon Source (APS), a U.S. Department of Energy (DOE) Office of Science User Facility at the DOE's Argonne National Laboratory, to analyze 13,000-year-old beetle fossils.

"The APS is one of the best places in the world to look at 3D nanostructures. The beamline can be optimized to look at structures at these length scales. It's super-fast and super-precise, with no sample damage." -- Vinod Kumar Saranathan, Yale-NUS College, Singapore

The team looked at the wing casings of two fossilized weevils (a species of small beetle) from the late Pleistocene era found on the shore of a lake called Lobsigensee in Switzerland, perfectly preserved in sediment. They found that the expected photonic nanostructures -- repeating microscopic arrangements of crystal-like material -- were also perfectly preserved, giving scientists a window into the way these structures may have evolved over time.

What they discovered, according to Vinod Kumar Saranathan, an assistant professor of life sciences at Yale-NUS College in Singapore, was that the blue and green structural colors they studied had not changed in 13,000 years.

"We compared these samples to modern beetle wings of the same genus and found them to be very similar," said Saranathan, who led this research in collaboration with paleobiologists Maria McNamara and Luke McDonald of University College Cork in Ireland. "That's a long time for insects, nearly 50,000 generations, and the color has not changed."

While different families of insects grow different kinds of nanostructures, they all converge on similar lustrous qualities. These are not colors made with pigments, so they don't fade with time. The crystalline structures reflect light in such a way that the colors are iridescent, brighter and more arresting than the colors we can produce chemically. Finding a way to replicate this process could lead to brighter, longer-lasting and eco-friendly colors for manufacturing.

According to Saranathan, it is believed that the weevils' green colors first evolved as camouflage millions of years ago when the insects began eating plant sap and leaves. Over time, they began to use these iridescent colors as a way of signaling to potential mates and warding off predators. Weevils are not the only animals to have evolved these complex 3D nanostructures -- Saranathan's previous research has found them in butterflies as well, for instance.

Key to studying these structures are the ultra-bright X-ray beams generated by the APS. The research team used X-ray scattering techniques to probe the structures and combined those results with data gathered with electron microscopes and optical modeling.

Saranathan first began bringing fossils of animals and birds to the APS in 2008 and has been working with Suresh Narayanan, physicist and group leader, and Alec Sandy, associate division director for X-ray science technologies, both of Argonne's X-ray Science Division (XSD), ever since. Both Narayanan and Sandy are co-authors on the recent weevil research, which was published in Biology Letters. The APS portion of the research was performed at XSD beamline 8-ID-I.

"The APS is unique in that we have a small and clean, but very intense, X-ray beam that can survey an area of 10-15 microns," said Narayanan. "A clean beam helps in probing micron scale structures, which is crucial for this type of study."

Narayanan sees this research as a testament to the work done at DOE User Facilities around the country.

"User facilities don't just do one kind of science," he said. "They touch on areas across every discipline. Working on this research, we are able to contribute to the understanding of evolution."

Saranathan says that the APS' ability to probe large numbers of samples at once with great precision while preserving the samples themselves -- something that is not guaranteed with other methods of analysis -- keeps him coming back to Argonne for his research.

"The APS is one of the best places in the world to look at 3D nanostructures," he said. "The beamline can be optimized to look at structures at these length scales. It's super-fast and super-precise, with no sample damage."

Saranathan has been studying these crystalline nanostructures for more than a decade, and his goal, he said, is to definitively figure out the reasons that they evolved. In order to do that, however, he will need more fossil samples, and they're hard to come by.

This is only the second time that 3D images of photonic nanostructures have been studied in the fossil record, Saranathan said. He and McNamara were the ones who led the first set as well. The latest fossils were preserved by coincidence, Saranathan said. The beetles died along the lakeshore, and the sediments they were found in were accessible.

"This is a proof of concept," Saranathan said. "It's more difficult because these samples are rare, but we know we can learn more about how these nanostructures evolved."