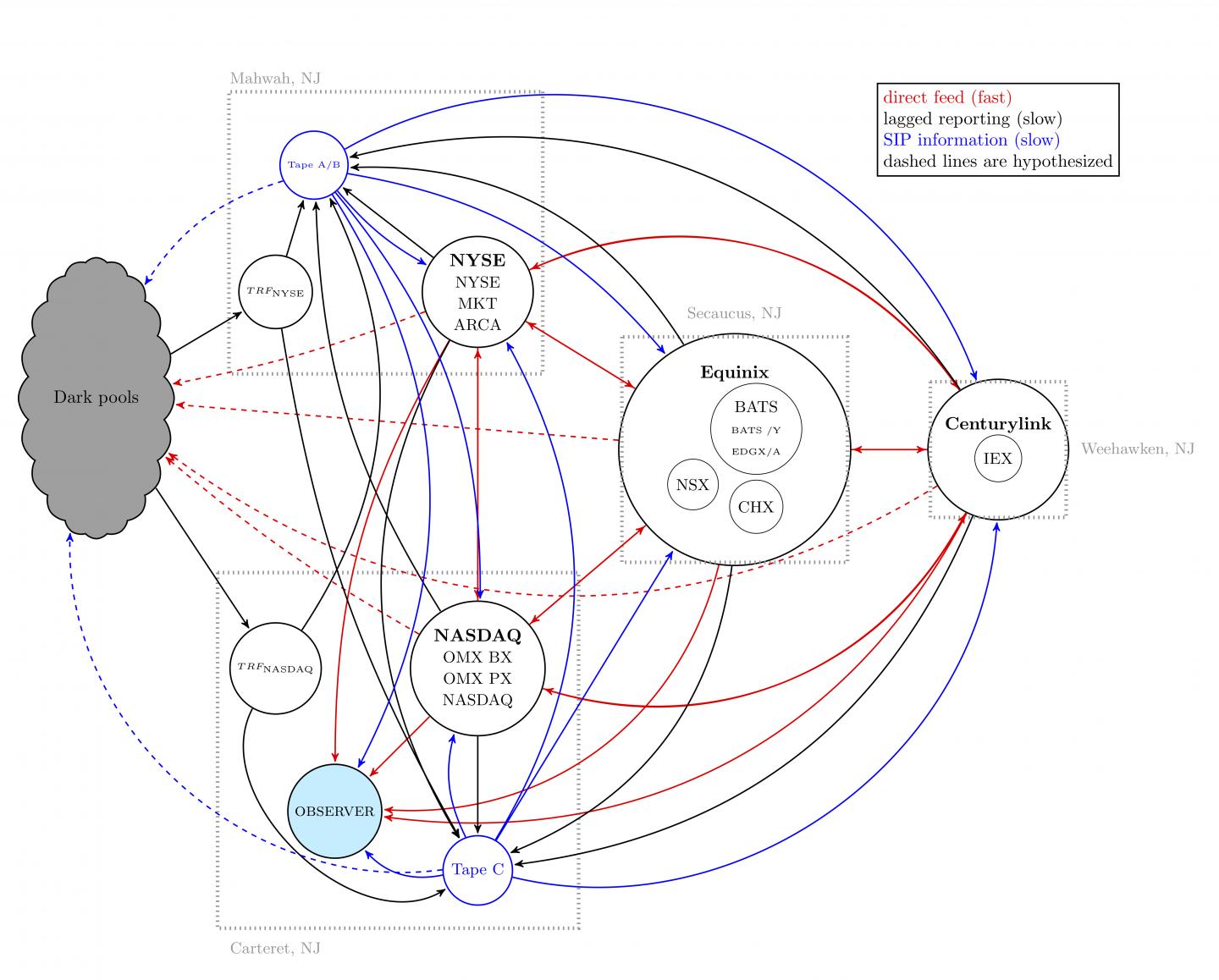 IMAGE: Looking a bit like a bowl of spaghetti, this map shows the general scheme of the US stock market -- formally known as the National Market System -- as described...

Imagine standing in the grocery store, looking at a pile of bananas. On your side of the pile, the manager has posted yesterday's newspaper flyer, showing bananas at 62¢ per pound--so that's what you pay at the register. But on the other side of the pile, there's an up-to-the-minute screen showing that the price of bananas has now dropped to 48¢ per pound--so that's what the guy over there pays. Exact same bananas, but the price you see depends on which aisle you're standing in.

New research from the University of Vermont and The MITRE Corporation shows that a similar situation--that the scientists call an "opportunity cost due to information asymmetry"--appears to be happening in the U.S. stock market.

And, the research shows, it's costing investors at least two billion dollars each year.

The first of three studies, "Fragmentation and inefficiencies in the US equity markets: Evidence from the Dow 30," was published on January 22 in the open-access journal PLOS ONE.

Instead of price discrepancies over days or even seconds, these stock market "dislocations" blink into existence for mere microseconds--far faster than a person could perceive--but still real and driven by the strange fact that information can move no faster than the speed of light.

This ultimate limit has become more important as trading computers have gotten faster--especially since 2005 when regulation changed and as various outlets of the ostensibly singular US stock market have been spread to several locations over dozens of miles across the Hudson River from Manhattan in northern New Jersey. "Even in cartoon form, some refer to our simple map of the stock market as a gigantic bowl of spaghetti," says Brian Tivnan, a research scientist with both UVM and MITRE, who co-led the new study.

This increasingly complex trading arrangement--formally known as the "National Market System"--includes the New York Stock Exchange, NASDAQ, and many other nodes including ominous-sounding private trading venues called "dark pools." Therefore, as price information, even at near the speed of light, winds about in this electronic spaghetti, it reaches some traders later than others.

And, like the two aisles in the supermarket, some people buying and selling stocks use a relatively inexpensive, slower public feed of information about prices, called the Securities Information Processor, or "SIP," while other traders--millions of times each day--are shown a price earlier, if they have access to very expensive, faster, proprietary information called a "direct feed."

The result: not all traders see the best available price at any moment in time, as they should according to both leading academic theories and market regulation. "That's not supposed to happen," say UVM scientist Chris Danforth, who co-led the new study, "but our close look at the data shows that it does."

This early information presents the opportunity for what economists call "latency arbitrage," which brings us back to the bananas. Now imagine that the guy in the other aisle, who knows that bananas can be had at this moment for 48¢/pound, buys the whole bunch, steps into your aisle and sells them to all the people who can only see the 62¢ price. Each pound of banana only profits him 14¢--but suppose he could sell a million of pounds of bananas each day.

The research team, housed in UVM's Computational Finance Lab --and with crucial work by UVM doctoral students David Dewhurst, Colin Van Oort, John Ring and Tyler Gray, as well as MITRE scientists Matthew Koehler, Matthew McMahon, David Slater and Jason Veneman and research intern, Brendan Tivnan--found billions of similar opportunities for latency arbitrage in the U.S. stock market over the course of the year they studied. Using blazing-fast computers, so-called high-frequency traders can buy stocks at slightly better prices, and then, in far less than the blink of an eye, turn around and sell them at a profit.

"We're not commenting on whether this is fair. It is certainly permissible under current regulation. As scientists, we're just rigorously looking at the data and showing that it is true," says Tivnan. For the new PLOS ONE study, the research team used data from the thirty stocks that make up the Dow Jones Industrial Average--and studied every price quote and trade made for an entire year, 2016.

In one case highlighted in the new PLOS study, the team looked at the sale of shares of Apple, Inc. on the morning of January 7, 2016. The scientists picked out any price dislocation greater than a penny that lasted longer than 545 millionths of second--enough time for a high-speed trade. In one moment, "on the offer side from 9:48:55.396886 to 9:48:55.398749 (a duration of 1863 microseconds)," the researchers write, "the SIP best offer remained at $99.11 and the Direct best offer remained at $99.17. Thus, any bid orders submitted during this period stood to save $0.06 per share."

And, in fact, one hundred shares of Apple--at approximately 9:48:55.396951 in the morning--sold for $99.11 when they might have fetched six cents per share more, costing that investor a few dollars, about the price of a few bananas. But, multiplied by 120 millions times in just the thirty stocks that make up the Dow Jones Industrial Average--as the scientists report in their new study--this kind of price gap cost investors more than $160 million. And over the larger Russell 3000 index, the result across the market was a cost of at least $2 billion.

The new PLOS study, and two related ones, are the first public research to make direct observation of the most comprehensive stock market dataset available to regulators and investors. With support from the Departments of Defense and Homeland Security, and the National Science Foundation, the researchers at MITRE and UVM were able to examine direct feeds that customarily cost high-end investors hundreds of thousands of dollars each month.

"In short, what we discovered is that from these momentary blips in the market, some people must have made a lot of money," say UVM's Chris Danforth, a professor in the Department of Mathematics & Statistics and Complex Systems Center.

The Wall Street Journal broke the news on these studies last year, when they were still in a pre-print public server, the "arXiv." Now the first of them has completed peer review and is being published in PLOS ONE. The second, that examines a broader pool of evidence of these market "inefficiencies" in nearly 3000 different stocks, is in revisions and remains posted on the pre-print arXiv. And a third, even more far-reaching study, is in development by the team.

Since the Wall Street Journal article was published, the Securities and Exchange Commission appears to have grown more concerned about these price gaps and the different data streams that investors have to work with. On January 8, the SEC put out a request for comment on a newly proposed set of rules to modernize the governance of how the National Market System produces and disseminates data. Since 2005, "the speed and dispersion of trading activity have increased substantially," the commission writes, and, "there have not been adequate improvements made to address important differences between consolidated market data and proprietary data products."

The scientists in UVM's Computational Finance Lab saw this coming. "Along with others in the scientific community, we identified these same concerns, probably five years ago or more," notes Brian Tivnan. "But our study is the first to quantify the implications of these concerns."

How to fix these differences between players in the market will be difficult, the researchers think. "Dislocations are intrinsic to a fragmented market," Tivnan says, such as now exists in the U.S. stock market with multiple exchanges spread out between four New Jersey communities and with many complex back-and-forth flows of information.

"No technological upgrade will eliminate dislocations," Tivnan says, "even if the exchanges could upgrade the underlying technology to transmit information at the speed of light."

Why can't faster shared technology fix the problem? "Even when controlling for technology, such that all investors rely on the same tech, relativistic effects dictate that the location of the investor will determine what that investor may observe," says Brian Tivnan. "That is, what you see depends on where you are in the market."