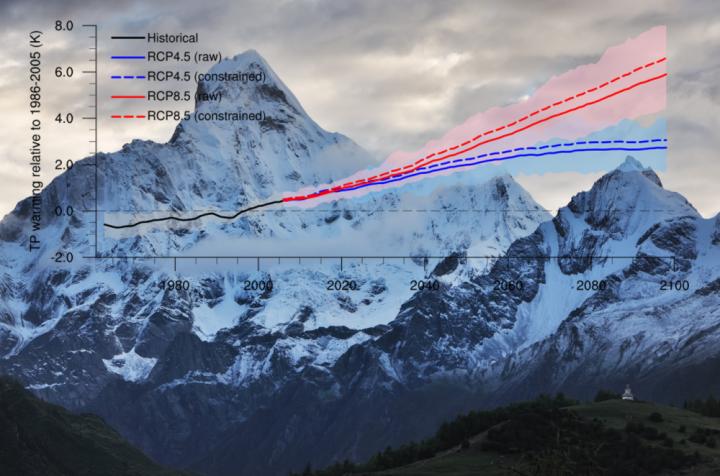 IMAGE: Projected future warming of the Tibetan Plateau in the CMIP5 ensemble. The thick curves indicate the multi-model ensemble means and the shadings denote the 90% model intervals, derived from the...

The Tibetan Plateau, known as "the roof of the world", has warmed more rapidly than global average in the past decades. The observed warming of the Tibetan Plateau since 1960s can be attributed to human activities, particularly greenhouse gas emissions. Moreover, the Plateau may warm faster in the future than climate models projected, according to a study recently published in Environmental Research Letters.

The Tibetan Plateau contains the largest volumes of ice outside the Arctic and Antarctic, feeding water to dozens of major Asian rivers. However, the rapid warming of the "Water Tower of Asia" has significantly affected regional hydrological cycle and ecosystem services, leading to remarkable glacier retreat and geohazard disasters such as landslides, debris flows and glacial lake outbursts.

"A clear understanding of the past warming of the Tibetan Plateau, particularly the underlying human influence, can help better anticipating and interpreting future changes," said Tianjun Zhou, the lead and corresponding author on the paper. Zhou is a senior scientist at the Institute of Atmospheric Physics (IAP) and CAS Center for Excellence in Tibetan Plateau Earth Sciences in the Chinese Academy of Sciences. He is also a professor at the University of Chinese Academy of Sciences.

To disentangle and quantify the relative contributions of different external forcings in the observed warming, Zhou and his team used CMIP5, an archive of comprehensive climate models, in which historical simulations are driven by individual external forcings. Using an optimal fingerprinting detection and attribution analysis, the researchers demonstrate that human influence is the dominant driver for the observed warming of the Tibetan Plateau (1.23°C over 1961-2005) with the greenhouse gases in particular contributing approximately 1.37°C, which was slightly offset by anthropogenic aerosols. Moreover, by quantitatively comparing observations and modeled responses, the attribution analysis indicates that the CMIP5 ensemble tends to underestimate the anthropogenic warming trend on the Tibetan Plateau.

Considering the underestimated anthropogenic warming on the Tibetan Plateau by current global climate models, the team went further to correct future projections using the attribution result as an observational constraint, and found the Tibetan Plateau will likely warm faster than previously expected in the future.

"For example, under a medium carbon emission scenario (RCP4.5), the Tibetan Plateau is expected to warm by 2.25°C and 2.99°C in the mid-term (2041-2060) and end of 21st century (2081-2100), which are 0.24°C and 0.32°C warmer than the uncorrected projections, respectively," introduced Wenxia Zhang, the second author of the study. "This implies a greater loss of glacier mass and further increased geohazard risks in the Asian water tower."