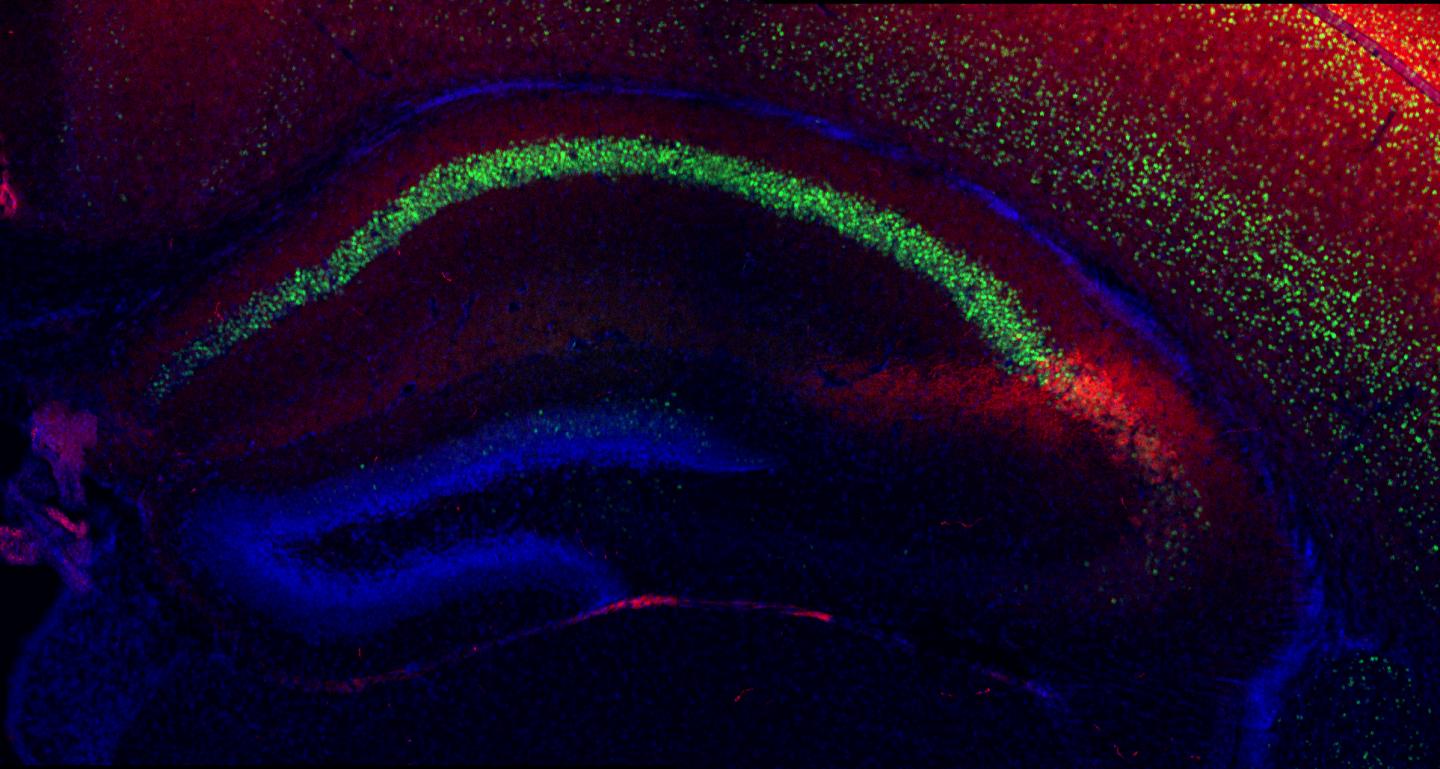 IMAGE: This image shows the CA2 region of the hippocampus in a mouse pup.

"I'm really interested in studying the development of social memory," says first author Blake J. Laham of Princeton University, "which is the memory we have for other individuals including certain facts and features about them." These early memories can form long-lasting social connections that set the stage for social interactions later in life. To understand how and when social memories first develop, Laham turned to mouse pups' memory of their mothers.

With closed eyes and ears, three-day-old mice are pink, hairless, and a tad translucent, just enough to see the white milk in their bellies. Although pups at this age have poor motor skills, they had no problem recognizing their caregivers, likely using scent. Because there is a possibility that animals may recognize their biological mother based purely on genetic factors, Laham and colleagues placed the pups in their study under "foster care" with a different mouse mother, known as the caregiving mother, at birth.

When Laham put the pups between the caregiving mother and an unrelated mouse mother (novel mother), the animals flailed their tiny bodies, rotating themselves to the mother that raised them. They spent more time pointing their nose towards their caregivers, a sign of recognition and preference.

The authors found that these memories for their foster mothers lasted into adulthood, with mice retaining the ability to recognize their mothers even after being separated for over 100 days. However, "there's this really fascinating behavioral transition once the animal is weaned," says Laham. "When the animal is no longer dependent on the caregiving mother, the animal prefers investigating novel mothers." Laham suggested that adult mice might have more interest in investigating if an unknown mouse is a threat or a potential mate.

To identify what these memories of their mothers look like in the mouse brain, the researchers examined a region associated with social memory called CA2 in the hippocampus. They found that mouse pups showed more biological markers related to neuronal activity in the brain region after exposure to their caregiving mothers. On the contrary, adults expressed more of those markers after exposure to novel mothers, suggesting that CA2 played role in the behavioral flip.

They also found that temporarily shutting down neuronal activity in the CA2 region in both mouse pups and adults impaired their ability to distinguish their caregivers from novel mothers. The next step for Laham and his colleagues is to investigate how neighboring brain regions contribute to this phenomenon.

"Our life is composed of memories--but at the end of the day, all of our memories that mean so much to us, that motivate us, that fill us with joy or fear, are just neurons communicating with each other. That's fascinating to me," says Laham.