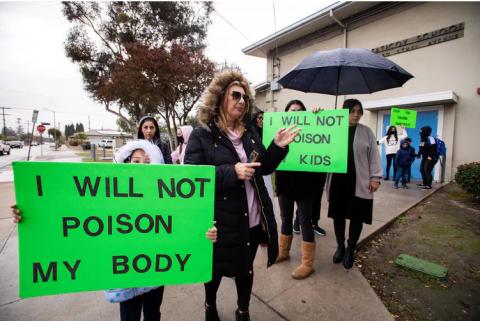 The ongoing battles over COVID-19 vaccination in the U.S. are likely to get more heated when the Food and Drug Administration authorizes emergency use of a vaccine for children ages 5 to 11, expected later this fall.

California has announced it will require the vaccine for elementary school attendance once it receives full FDA approval after emergency use authorization, and other states may follow suit. COVID-19 vaccination mandates in workplaces and colleges have sparked controversy, and the possibility that a mandate might extend to younger children is even more contentious.

Kids are already required to get a host of other vaccines to attend school. School vaccination mandates have been around since the 19th century, and they became a fixture in all 50 states in the 1970s. Vaccine requirements are among the most effective means of controlling infectious diseases, but they’re currently under attack by small but vocal minorities of parents who consider them unacceptable intrusions on parental rights.

As a public health historian who studies the evolution of vaccination policies, I see stark differences between the current debates over COVID-19 vaccination and the public response to previous mandates. 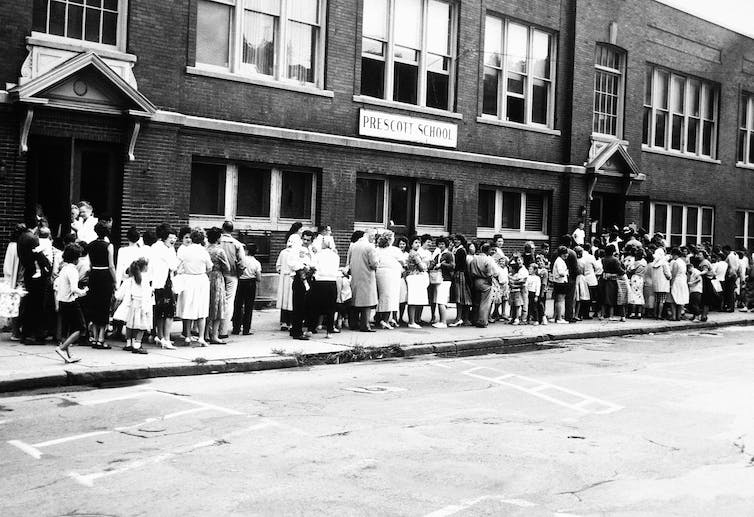 Children and parents lined up for polio vaccines outside a Syracuse, New York school in 1961. AP Photo

Compulsory vaccination in the past

The first legal requirements for vaccination date to the early 1800s, when gruesome and deadly diseases routinely terrorized communities. A loose patchwork of local and state laws were enacted to stop epidemics of smallpox, the era’s only vaccine-preventable disease.

Vaccine mandates initially applied to the general population. But in the 1850s, as universal public education became more common, people recognized that schoolhouses were likely sites for the spread of disease. Some states and localities began enacting laws tying school attendance to vaccination. The smallpox vaccine was crude by today’s standards, and concerns about its safety led to numerous lawsuits over mandates.

The U.S. Supreme Court upheld compulsory vaccination in two decisions. The first, in 1905, affirmed that mandates are constitutional. The second, in 1922, specifically upheld school-based requirements. In spite of these rulings, many states lacked a smallpox vaccination law, and some states that did have one failed to enforce it consistently. Few states updated their laws as new vaccines became available.

School vaccination laws underwent a major overhaul beginning in the 1960s, when health officials grew frustrated that outbreaks of measles were continuing to occur in schools even though a safe and effective vaccine had recently been licensed.

Many parents mistakenly believed that measles was an annoying but mild disease from which most kids quickly recovered. In fact, it often caused serious complications, including potentially fatal pneumonia and swelling of the brain.

With encouragement from the Centers for Disease Control and Prevention, all states updated old laws or enacted new ones, which generally covered all seven childhood vaccines that had been developed by that time: diphtheria, pertussis, tetanus, polio, measles, mumps and rubella. In 1968, just half the states had school vaccination requirements; by 1981, all states did. 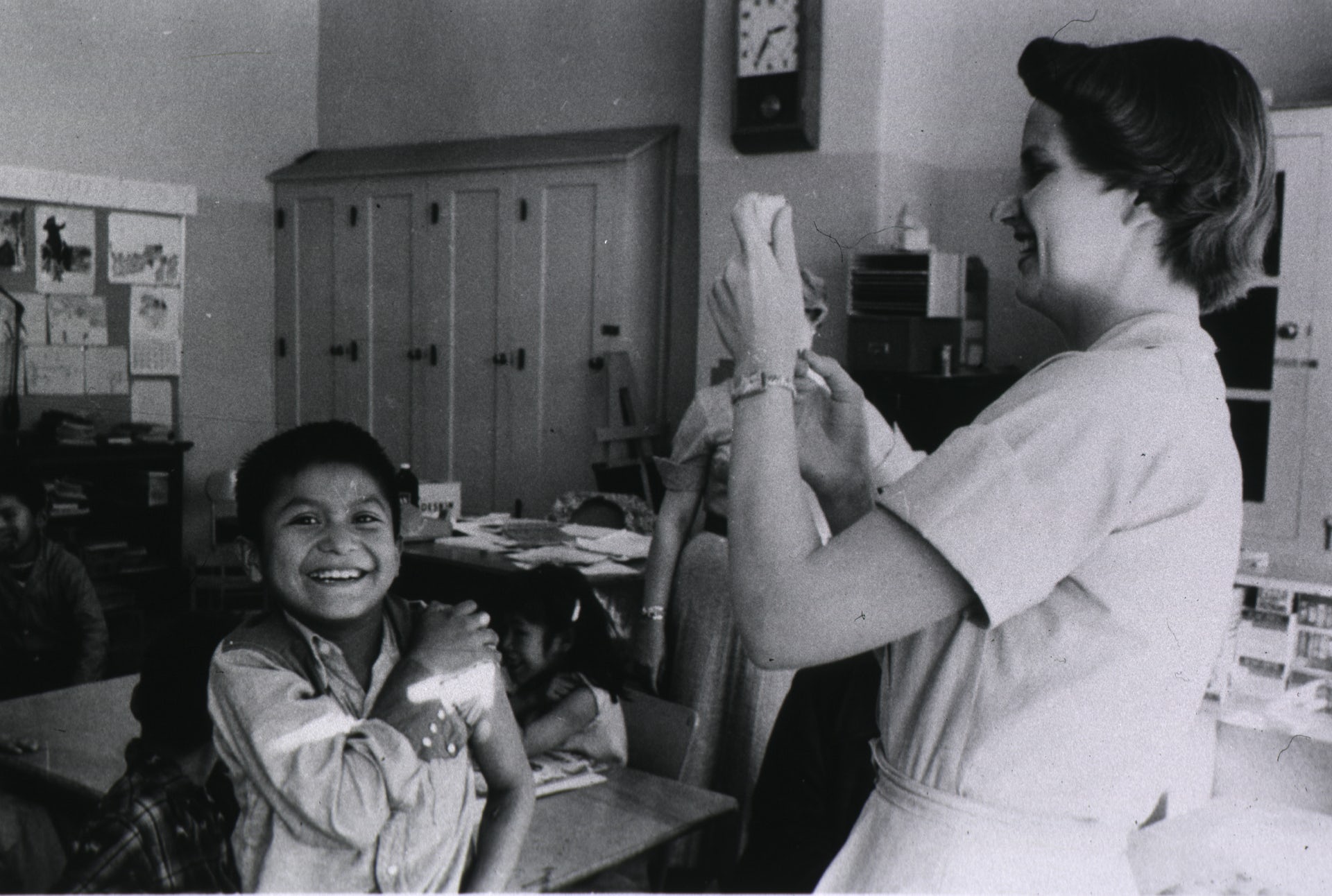 What is most surprising about this major expansion of vaccination mandates is how little controversy it provoked.

The laws did draw scattered court challenges, usually over the question of exemptions – which children, if any, should be allowed to opt out. These lawsuits were often brought by chiropractors and other adherents of alternative medicine. In most instances, courts turned away these challenges.

There was scant public protest. In contrast to today’s vocal and well-networked anti-vaccination activists, organized resistance to vaccination remained on the fringes in the 1970s, the period when these school vaccine mandates were largely passed. Unlike today, when fraudulent theories of vaccine-related harm – such as the discredited notion that vaccines cause autism – circulate endlessly on social media, public discussion of the alleged or actual risks of vaccines was largely absent.

Through most of the 20th century, parents were less likely to question pediatricians’ recommendations than they are today. In contrast to the empowered “patient/consumer” of today, an attitude of “doctor knows best” prevailed. All these factors contributed to overwhelmingly positive views of vaccination, with more than 90% of parents in a 1978 poll reporting that they would vaccinate their children even if there were no law requiring them to do so.

Widespread public support for vaccination enabled the laws to be passed easily – but it took more than placing a law on the books to control disease. Vaccination rates continued to lag in the 1970s, not because of opposition, but because of complacency.

Thanks to the success of earlier vaccination programs, most parents of young children lacked firsthand experience with the suffering and death that diseases like polio or whooping cough had caused in previous eras. But public health officials recognized that those diseases were far from eradicated and would continue to threaten children unless higher rates of vaccination were reached. Vaccines were already becoming a victim of their success. The better they worked, the more people thought they were no longer needed.

In response to this lack of urgency, the CDC launched a nationwide push in 1977 to help states enforce the laws they had recently enacted. Around the country, health officials partnered with school districts to audit student records and provide on-site vaccination programs. When push came to shove, they would exclude unvaccinated children from school until they completed the necessary shots.

The lesson learned was that making a law successful requires ongoing effort and commitment – and continually reminding parents about the value of vaccines in keeping schools and entire communities healthy.

Five decades after school mandates became universal in the U.S., support for them remains strong overall. But misinformation spread over the internet and social media has weakened the public consensus about the value of vaccination that allowed these laws to be enacted.

COVID-19 vaccination has become politicized in a way that is unprecedented, with sharp partisan divides over whether COVID-19 is really a threat, and whether the guidance of scientific experts can be trusted. The attention focused on COVID-19 vaccines has given new opportunities for anti-vaccination conspiracy theories to reach wide audiences.

Fierce opposition to COVID-19 vaccination, powered by anti-government sentiment and misguided notions of freedom, could undermine support for time-tested school requirements that have protected communities for decades. Although vaccinating school-aged children will be critical to controlling COVID-19, lawmakers will need to proceed with caution.

By James Colgrove, Professor of Sociomedical Sciences, Mailman School of Public Health; Dean of the Postbaccalaureate Premedical Program, Columbia School of General Studies, Columbia University This article is republished from The Conversation under a Creative Commons license. Read the original article.