THEMIS weighs in on the Northern Lights

Instruments known as solid-state telescopes (SSTs), built with detectors fabricated at Lawrence Berkeley National Laboratory and carried aboard the recently launched THEMIS mission, have delivered their first data on how charged particles in the solar wind interact with Earth's magnetic field to shape the planet's magnetosphere.

THEMIS's principal investigator is Vassilis Angelopoulos of the University of California at Berkeley's Space Sciences Laboratory (SSL), which is leading the mission for NASA and which designed and built the instruments in collaboration with agencies in Germany, France, and Austria. 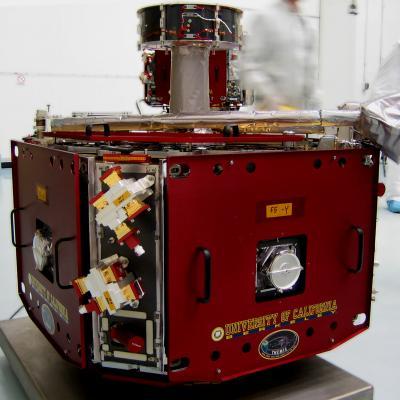 One of the five THEMIS spacecraft prior to launch. Its two solid-state telescope units, each with two opposite-facing SSTs incorporating four silicon detectors each, are mounted on the near edge. Credit: UC Berkeley Space Sciences Laboratory

The first NASA mission comprised of five different coordinated spacecraft, all five THEMIS spacecraft were launched from Cape Canaveral together aboard a single rocket on February 17, 2007. Eventually the five will study the mysterious eruptions in Earth's Northern and Southern Lights known as "substorms," but first they must achieve widely separated orbits, a process that will take several months.

An acronym for Time History of Events and Macroscopic Interactions during Substorms, THEMIS will obtain the evidence needed to solve what principal investigator Angelopoulos calls "a nagging question that the field has to resolve" -- namely, competing theories about where auroral substorms originate in the magnetosphere.

As one of several instrument systems carried aboard the five THEMIS spacecraft, the solid-state telescopes will gather some of the most important evidence. The SSTs' job is to measure the energy distribution of electrons and ions (charged atoms and atomic nuclei) arriving at each spacecraft from different parts of the sky. To do this, the SSTs use custom-built silicon diode detectors made in Berkeley Lab's Microsystems Laboratory by Craig Tindall, Steve Holland, and Nick Palaio of the Engineering Division.

These large-area detectors have very thin contacts, only a few hundred angstroms thick. This allows them to detect electrons and ions with energies much lower than those that can be detected with standard silicon detectors, giving the SSTs the ability to cover a wide energy range, from high to low. But because the contacts are so thin, making a sufficient quantity of the large detectors posed a significant challenge.

Using the finished detectors, UC Berkeley's Davin Larson directed assembly of the solid-state telescopes at SSL. Each SST is based on four detectors; two SSTs mounted side by side and pointing in opposite directions form a unit, and two units are mounted on each spacecraft, for a total of 80 silicon diode detectors flown aboard the five spacecraft.

Berkeley Lab has a long history of creating and fabricating innovative detectors, beginning with detectors for high-energy particle experiments in accelerators and recently including detectors for space missions like STEREO, NASA's twin Solar Terrestrial Relations Observatories, launched in 2006; the Spitzer Space Telescope, launched in 2004; and RHESSI, the Ramaty High Energy Solar Spectroscopic Imager, launched in 2002.

Tindall and Palaio made detectors for the IMPACT instrument suite aboard STEREO using the same process as the THEMIS detectors; these are currently returning data on energetic solar particles.

Written from a news release by DOE/Lawrence Berkeley National Laboratory.