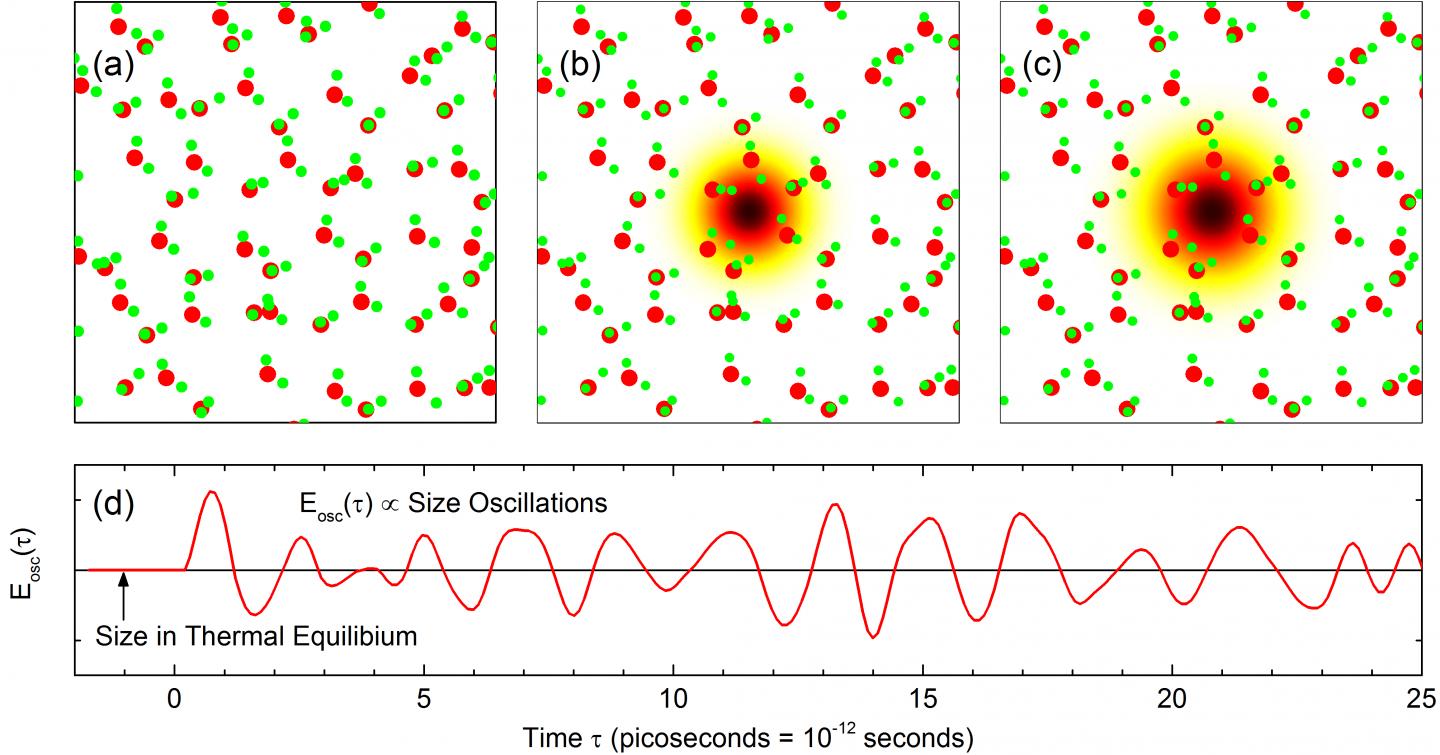 Ionization of water molecules by light generates free electrons in liquid water. After generation, the so-called solvated electron is formed, a localized electron surrounded by a shell of water molecules. In the ultrafast localization process, the electron and its water shell display strong oscillations, giving rise to terahertz emission for tens of picoseconds.

Ionization of atoms and molecules by light is a basic physical process generating a negatively charged free electron and a positively charged parent ion. If one ionizes liquid water, the free electron undergoes a sequence of ultrafast processes by which it loses energy and eventually localizes at a new site in the liquid, surrounded by a water shell [Fig. 1]. The localization process includes a reorientation of water molecules at the new site, a so-called solvation process, in order to minimize the electric interaction energy between the electron and the water dipole moments. The localized electron obeys the laws of quantum mechanics and displays discrete energy levels. Electron localization occurs in the subpicosecond time range (1 ps = 10^-12 s = a millionth of a millionth of a second) and is followed by dissipation of excess energy into the liquid.

Researchers at the Max-Born-Institute have now observed radiation in the terahertz range (1 THz = 10^12 Hz = 10^12 oscillations per second) which is initiated during the electron localization process. As they report in the recent issue of Physical Review Letters, Vol. 126, 097401 (2021), the THz emission can persist for up to 40 ps, i.e., much longer than the localization process itself. It displays a frequency between 0.2 and 1.5 THz, depending on the electron concentration in the liquid.

The emitted THz waves originate from oscillations of the solvated electrons and their water shells. The oscillation frequency is determined by the local electric field the liquid environment exerts on this quantum system. Adding hydrated electrons to the liquid changes the local field and, thus, induces a change of oscillation frequency with electron concentration. Most surprising is the comparably weak damping of the oscillations which points to a weak interaction with the fluctuating larger environment in the liquid and a longitudinal character of the underlying electron and water motions.

The new experimental results are accounted for by a theoretical model based on a polaron picture as explained in Fig. 1. The polaron is an excitation which includes coupled motions of the electron and the water shell at low frequency. Due to such internal oscillations of charge, the hydrated electron radiates a THz wave. The weak damping of this wave allows for a manipulation of the emission, e.g., by interaction of the hydrated electron with a sequence of ultrashort light pulses.