When people communicate, the way they move has as much to do with what they're saying as the words that come out of their mouths. But what about when robots communicate with people? How can robots use non-verbal communication to interact more naturally with humans? Researchers at the Georgia Institute of Technology found that when robots move in a more human-like fashion, with one movement leading into the next, that people can not only better recognize what the robot is doing, but they can also better mimic it themselves. The research is being presented today at the Human-Robot Interaction conference in Lausanne, Switzerland.

"It's important to build robots that meet people's social expectations because we think that will make it easier for people to understand how to approach them and how to interact with them," said Andrea Thomaz, assistant professor in the School of Interactive Computing at Georgia Tech's College of Computing.

Thomaz, along with Ph.D. student Michael Gielniak, conducted a study in which they asked how easily people can recognize what a robot is doing by watching its movements.

"Robot motion is typically characterized by jerky movements, with a lot of stops and starts, unlike human movement which is more fluid and dynamic," said Gielniak. "We want humans to interact with robots just as they might interact with other humans, so that it's intuitive."

Using a series of human movements taken in a motion-capture lab, they programmed the robot, Simon, to perform the movements. They also optimized that motion to allow for more joints to move at the same time and for the movements to flow into each other in an attempt to be more human-like. They asked their human subjects to watch Simon and identify the movements he made. 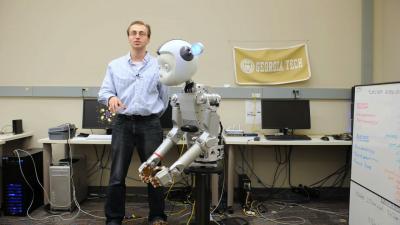 Georgia Tech Ph.D. student Michael Gielniak is working to allow robots like Simon to move in a way that's similar to humans, so that people will be comfortable interacting with robots.

"When the motion was more human-like, human beings were able to watch the motion and perceive what the robot was doing more easily," said Gielniak.

In addition, they tested the algorithm they used to create the optimized motion by asking humans to perform the movements they saw Simon making. The thinking was that if the movement created by the algorithm was indeed more human-like, then the subjects should have an easier time mimicking it. Turns out they did.

"We found that this optimization we do to create more life-like motion allows people to identify the motion more easily and mimic it more exactly," said Thomaz.

The research that Thomaz and Gielniak are doing is part of a theme in getting robots to move more like humans move. In future work, the pair plan on looking at how to get Simon to perform the same movements in various ways.

"So, instead of having the robot move the exact same way every single time you want the robot to perform a similar action like waving, you always want to see a different wave so that people forget that this is a robot they're interacting with," said Gielniak. 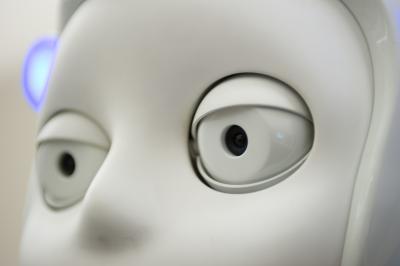 Simon is involved in a host of projects designed to look at the interaction of robots and humans. Simon is housed in the Socially Intelligent Machines Lab at Georgia Tech, directed by Andrea Thomaz, assistant professor in the School of Interactive Computing in the College of Computing.