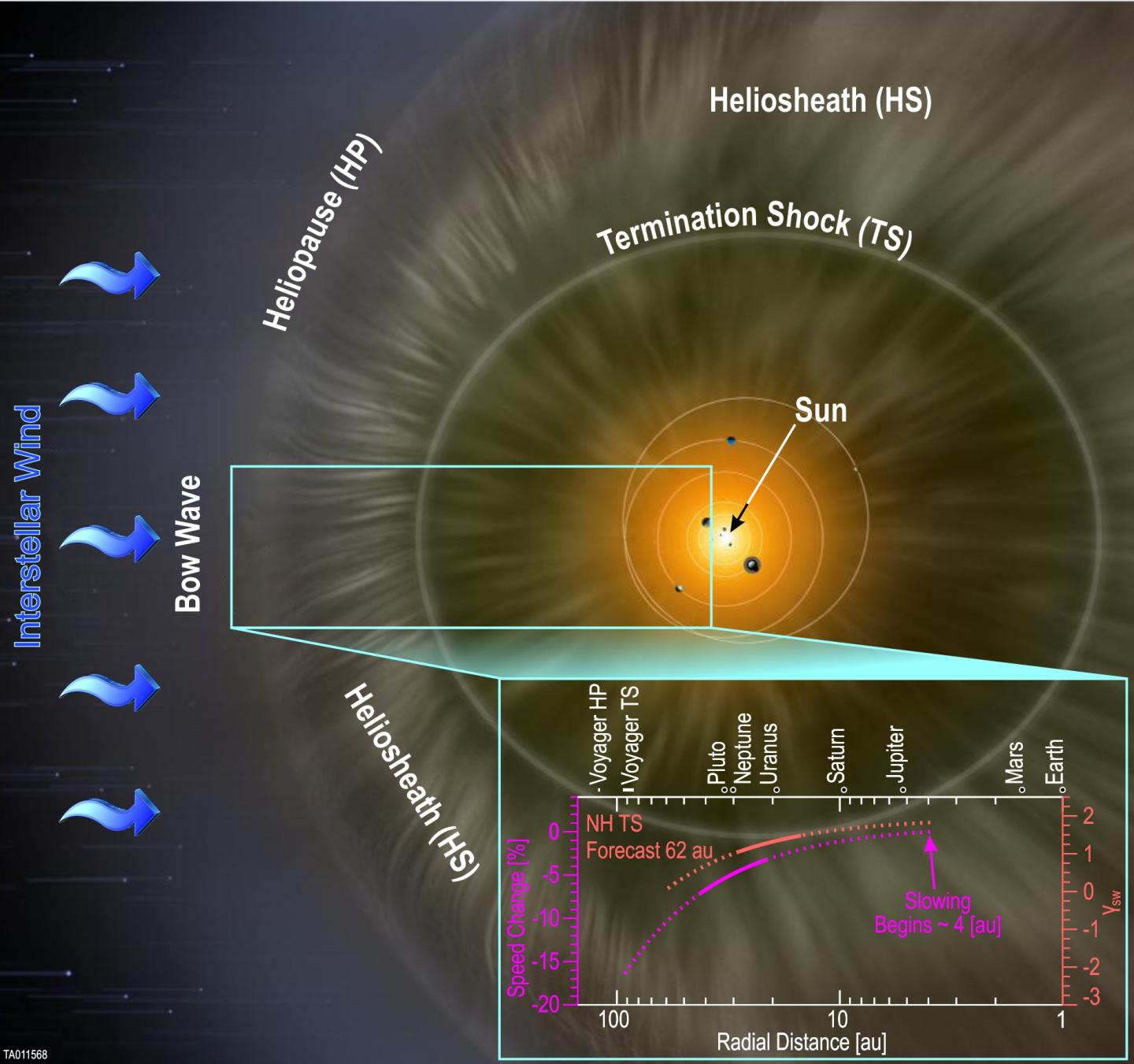 IMAGE: The SWAP instrument aboard NASA's New Horizons spacecraft has confirmed that the solar wind slows as it travels farther from the Sun. This schematic of the heliosphere shows the solar...

SAN ANTONIO -- December 2, 2019 -- Measurements taken by the Solar Wind Around Pluto (SWAP) instrument aboard NASA's New Horizons spacecraft are providing important new insights from some of the farthest reaches of space ever explored. In a paper recently published in the Astrophysical Journal, a team led by Southwest Research Institute shows how the solar wind -- the supersonic stream of charged particles blown out by the Sun -- evolves at increasing distances from the Sun.

"Previously, only the Pioneer 10 and 11 and Voyager 1 and 2 missions have explored the outer solar system and outer heliosphere, but now New Horizons is doing that with more modern scientific instruments," said Dr. Heather Elliott, a staff scientist at SwRI, Deputy Principal Investigator of the SWAP instrument and lead author of the paper. "Our Sun's influence on the space environment extends well beyond the outer planets, and SWAP is showing us new aspects of how that environment changes with distance."

As the solar wind moves farther from the Sun, it encounters an increasing amount of material from interstellar space. When interstellar material is ionized, the solar wind picks up the material and, researchers theorized, slows and heats in response. SWAP has now detected and confirmed this predicted effect.

The SWAP team compared the New Horizons solar wind speed measurements from 21 to 42 astronomical units to the speeds at 1 AU from both the Advanced Composition Explorer (ACE) and Solar TErrestrial RElations Observatory (STEREO) spacecraft. (One AU is equal to the distance between the Sun and Earth.) By 21 AU, it appeared that SWAP could be detecting the slowing of the solar wind in response to picking up interstellar material. However, when New Horizons traveled beyond Pluto, between 33 and 42 AU, the solar wind measured 6-7% slower than at the 1 AU distance, confirming the effect.

"New Horizons has significantly advanced our knowledge of distant planetary objects, and it's only fitting that it is now also revealing new knowledge about our own Sun and its heliosphere," said New Horizons Principal Investigator Dr. Alan Stern of the SwRI.