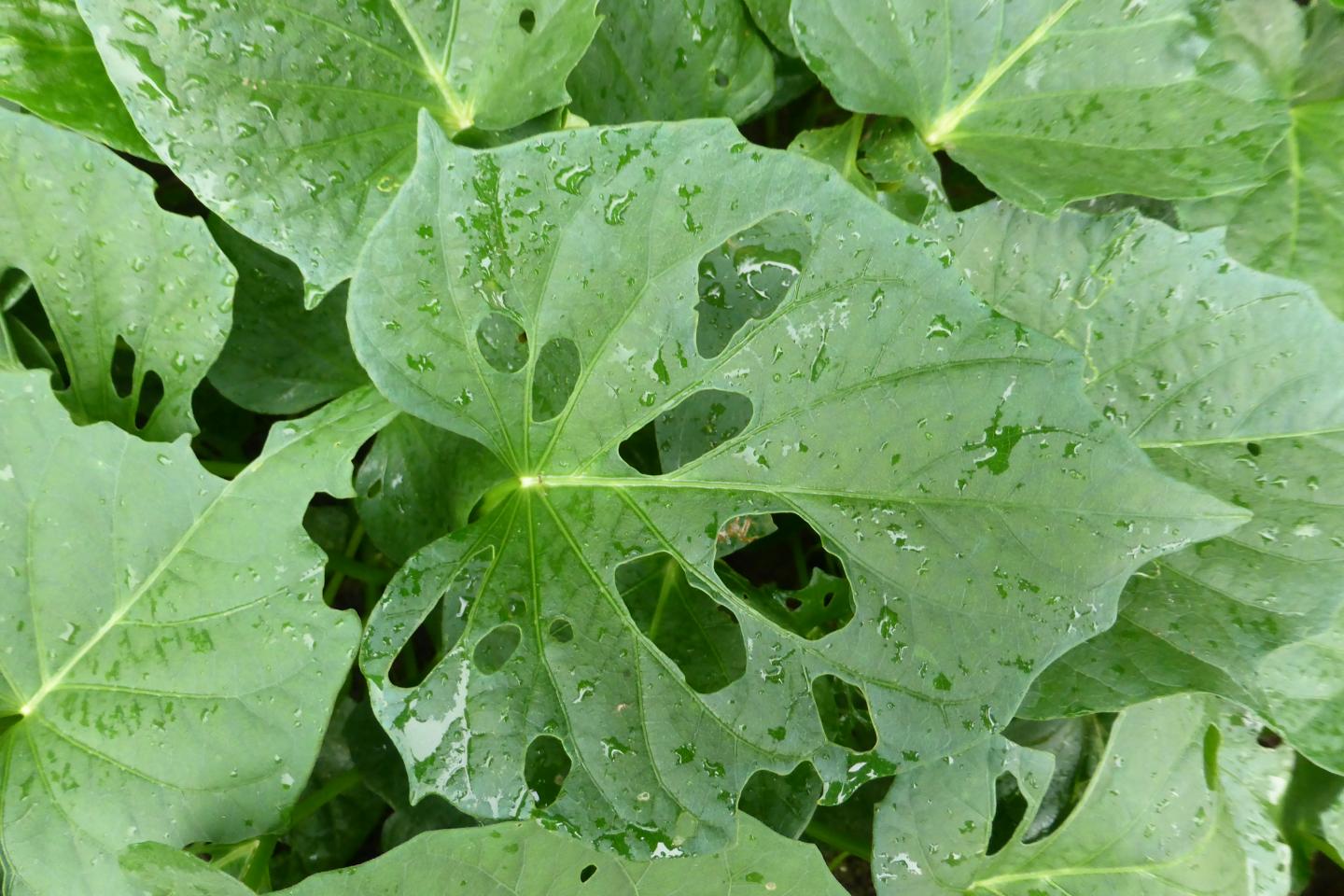 Sweet potatoes (Ipomoea batatas) are becoming more and more popular: Whether in soup or as fries, they increasingly compete with "regular" potatoes which, surprisingly, are only distantly related. Although economically not as important as the potato world-wide, the sweet potato has a higher nutritional value and is richer in vitamins. Particularly in Asia, the crop is an important source of nutrients. As with potatoes, there are different cultivars of sweet potatoes available, all displaying their own characteristics. Even cultivars grown in the field under similar conditions may differ strikingly with respect to insect attack. In previous studies, a cultivar known as Tainong 57 had demonstrably higher resistance to field herbivores in comparison to the cultivar known as Tainong 66. When attacked, the plants' leaves emit a distinct odor bouquet. Researchers at the Max Planck Institute for Chemical Ecology in Jena, Germany, and at the National Taiwan University wanted to find out whether the high insect resistance in one cultivar was related to this odor. They especially wanted to know whether sweet potatoes have mechanisms to activate defense responses via volatile signals, as described in other plant species.

First the scientists examined what happens in a plant after it has been attacked by herbivores. Plants of the resistant cultivar synthesize a plant hormone in the wounded leaves that is important for activating defense mechanisms. These plants also emit a bouquet of odors. As a result, a substance (sporamin) is formed in Tainong 57 leaves that are not directly affected by attack. Sporamin inhibits digestive enzymes in the attacking insects and causes the herbivores to completely lose their appetite. At the same time, sporamin is the dominant storage protein in the tuber and the reason why sweet potatoes must be cooked before being consumed. In the odor bouquet, only a single substance, DMNT, is responsible for this defense response: "DMNT is a terpene compound and smells almost a bit like herbal balm. One could imagine it as a fragrance used in a sauna," says Anja Meents, first author of the study and doctoral researcher at the MPI for Chemical Ecology, describing the scent. DMNT triggers the formation of the defense protein not only in the affected plant but also in neighboring plants that have not yet been attacked by herbivores. These plants are able to perceive the smell quickly and efficiently in order to prepare themselves to meet the impending threat.

"To our surprise, only one single volatile is enough to induce a specific defense reaction in a sweet potato plant of the Tainong 57 cultivar. Moreover, the same substance is simultaneously used by the plant for communication with neighboring plants in order to transmit important information," points out Axel Mithöfer, head of the Research Group Plant Defense Physiology. Interestingly, only plants of the resistant Tainong 57 cultivar released DMNT in high concentrations and were able to perceive the odor. Plants of the Tainong 66 cultivar, in contrast, released significantly less DMNT; even when the level of DMNT was increased, plants of this herbivore-susceptible sweet potato cultivar were unable to improve the effectiveness of their defense response.

"Our results are of great agricultural importance, because the consistent cultivation of resistant cultivars, such as Tainong 57, could help to considerably reduce the damage caused by herbivores in a natural way," Meents explains, indicating the practical potential of the study. The development of cultivars that release higher amounts of DMNT and which can perceive DMNT more efficiently compared to the cultivars in the study could further minimize the use of pesticides.

In further studies, the team of researchers would like to examine more closely how Tainong 57 perceives DMNT and transfers the signal into a defense response.