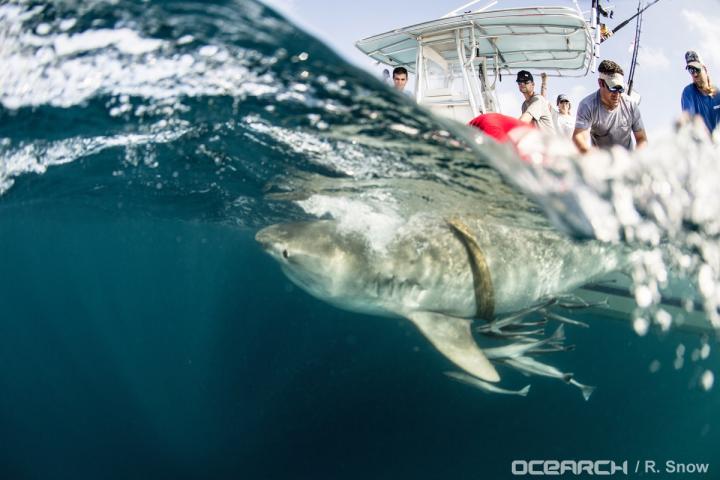 IMAGE: A tracking study of 56 tiger sharks provides a first look at how their patterns of movement across the Gulf of Mexico vary according to their sex, their life stage,...

Like other highly migratory sharks, tiger sharks (Galeocerdo cuvier) often traverse regional, national and international boundaries where they encounter various environmental and manmade stressors. Their range and habitat use in the Gulf of Mexico, a complex marine environment significantly impacted by the Deepwater Horizon Oil Spill in 2010, has been understudied and remains unknown.

Using sophisticated satellite telemetry, a study is the first to provide unique insights into how tiger sharks move and use habitats in the Gulf of Mexico across life-stages. Data from the study, just published in PLOS ONE, provide an important baseline for comparison against, and/or predicting their vulnerability to future environmental change such as climate variability or oil spills.

For the study, Matt Ajemian, Ph.D., lead author and an assistant research professor at Florida Atlantic University's Harbor Branch Oceanographic Institute, and a team of scientists examined size and sex-related movement and distribution patterns of tiger sharks in the Gulf of Mexico. They fitted 56 tiger sharks with Smart Position and temperature transmitting tags between 2010 - following the Deepwater Horizon Oil Spill - and 2018 - spanning shelf waters from south Texas to south Florida and examined seasonal and spatial distribution patterns across the Gulf of Mexico. The tags transmitted whenever the fin-mounted tags broke the sea surface, with orbiting satellites estimating shark positions based on these transmissions. Ajemian also analyzed overlap of core habitats among individuals relative to large benthic features including oil and gas platforms, natural banks, and bathymetric breaks.

"While all life stages of tiger sharks are known to occur in the Gulf of Mexico, detailed habitat use has never been quantified," said Ajemian. "This is rather striking as this marine system faces numerous manmade stressors, complex tri-national management, and indications of size reductions in recreational landings for large sharks."

Results showed significant ontogenetic and seasonal differences in distribution patterns as well as across-shelf (i.e., regional) and sex-linked variability in movement rates. Prior studies into tiger shark horizontal movements in the western North Atlantic Ocean have been restricted primarily to males or females separately, in disparate locations. By simultaneously tracking many males and females of varying life stages within the same region, the researchers observed sex and size-specific differences in distribution and movement rates, as well as associations with large-scale habitat features. For example, researchers found evidence of tiger shark core regions encompassing the National Oceanographic and Atmospheric Administration designated Habitat Areas of Particular Concern during cooler months, particularly by females. These are specifically bottom features of the Gulf that rise up from the edges of the continental shelf, and include places like the Flower Garden Banks National Marine Sanctuary. Additionally, shark core regions intersected with 2,504 oil and gas platforms, where previous researchers have observed them along the bottom.

The scientists note that future research may benefit from combining alternative tracking tools, such as acoustic telemetry and genetic approaches, which can facilitate long-term assessment of tiger shark movement dynamics and help identify the role of the core habitats identified in this study.

"This research is just a first glimpse into how these iconic predators use the Gulf of Mexico's large marine ecosystem," said Ajemian.