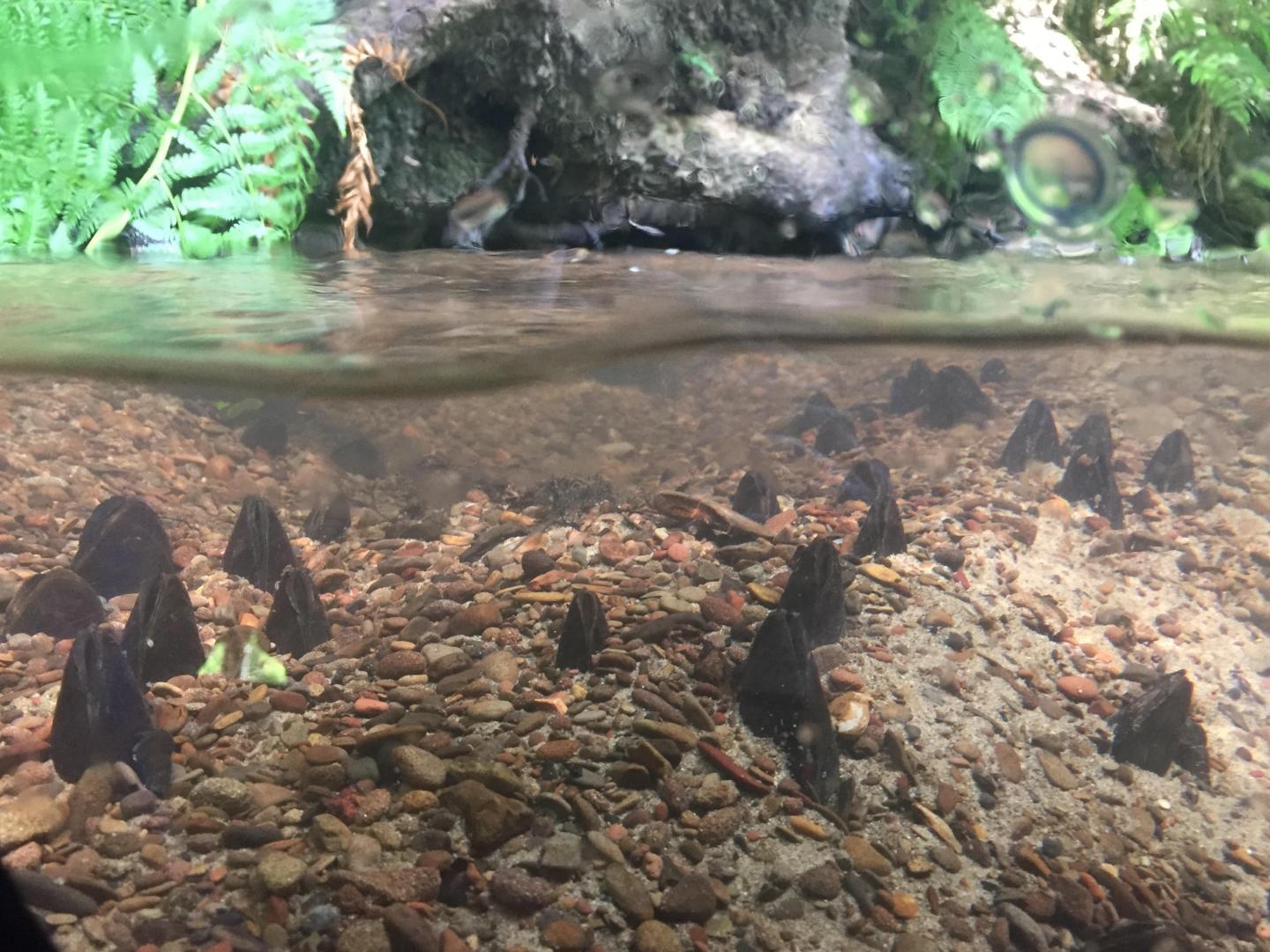 IMAGE: Freshwater mussels Margaritifera falcata in a small tributary of the Umpqua River

Pesticides used in forestry may threaten species in downstream rivers and estuaries, but little is known about the extent to which this occurs. A new study by researchers at Portland State University found mussels, clams and oysters in watersheds along the Oregon Coast are exposed to pesticides used in managing forests. The results of this study, published in the journal Toxics, have implications for developing better forest management practices that are less likely to negatively affect aquatic life.

The researchers also used special membranes to passively collect pesticides in the water at 15 watershed sites over a span of 45 days.

"During a rainfall event, you have pulses of pesticides washed from the land that move through the water," Scully-Engelmeyer said. "Passive water samplers are a way to monitor for these types of exposure."

The researchers tested both the bivalve tissue samples and the filtered water samples for the presence of dozens of different pesticides, including herbicides, fungicides and insecticides. They detected 16 different compounds in bivalve and passive water samples, five of which are currently used in forestland management. They also collected data from the state's public notification system, which reports pesticides used in state-regulated forestlands, to see if there were relationships between these notifications and the presence of different pesticides.

"The system provides notified activities so you don't know with 100% accuracy which chemicals were used and at what date," Scully-Engelmeyer said. "We can't say it's directly related to these specific activities, but we did find that it's related to notified activity upstream."

The team found pesticides in 38% of the bivalve samples, showing that compounds used on land were present at sufficient enough levels to accumulate in the tissues of mussels, clams and oysters. Indaziflam, an herbicide currently used in Oregon forestry, was found in 7% of the bivalve samples. Contaminants also included pesticides used in orchards, Christmas tree farms, and homes as well as previously used -- and now banned -- pesticides, including DDT byproducts.

The types and amounts of pesticides varied by site, but all watersheds had at least one of the 12 chemicals detected in sampled bivalves. The most contaminated organisms were collected along the Central Oregon Coast, in the Siuslaw and Smith watersheds.

"The levels of the particular compounds we detected are not something that federal guidelines consider harmful to human health, however, they may be harmful to animals in aquatic and marine environments," Granek said. "Additionally, we were just looking at a handful of compounds, yet aquatic organisms and their consumers are likely exposed to many more contaminants including microplastics and heavy metals, among others. How the exposure we detected -- paired with other contaminants they may encounter in their waters -- affect the animals sampled or their predators is a really interesting question and unfortunately we don't have regulatory guidelines that consider exposure to multiple stressors."

The results of this study -- and subsequent studies -- may help guide evidence-based forest management practices to reduce the amounts of forestry chemicals entering aquatic ecosystems.

Forestry management has long been a contentious issue in Oregon with the timber industry and environmental groups frequently struggling to find common ground, however there are signs this is changing:

-In June, Senate Bill 1602, which changes some of Oregon's non-federal forestland protections, including the size of helicopter pesticide spray buffers along streams, passed almost unanimously.
-And last February, Governor Kate Brown announced the Private Forest Accord, an agreement that 13 timber and forest products entities and 13 environmental organizations will work together to determine recommendations for changing how forests are managed.

Granek has been contacted by this working group about the study. "This work is really timely," she said. "I hope it will inform some of their process."

Granek and others in her lab are currently studying how individual pesticide compounds -- and combinations of these compounds -- affect the health, growth and survival of softshell clams. She hopes results of this work will also be shared with the Private Forest Accord working group.