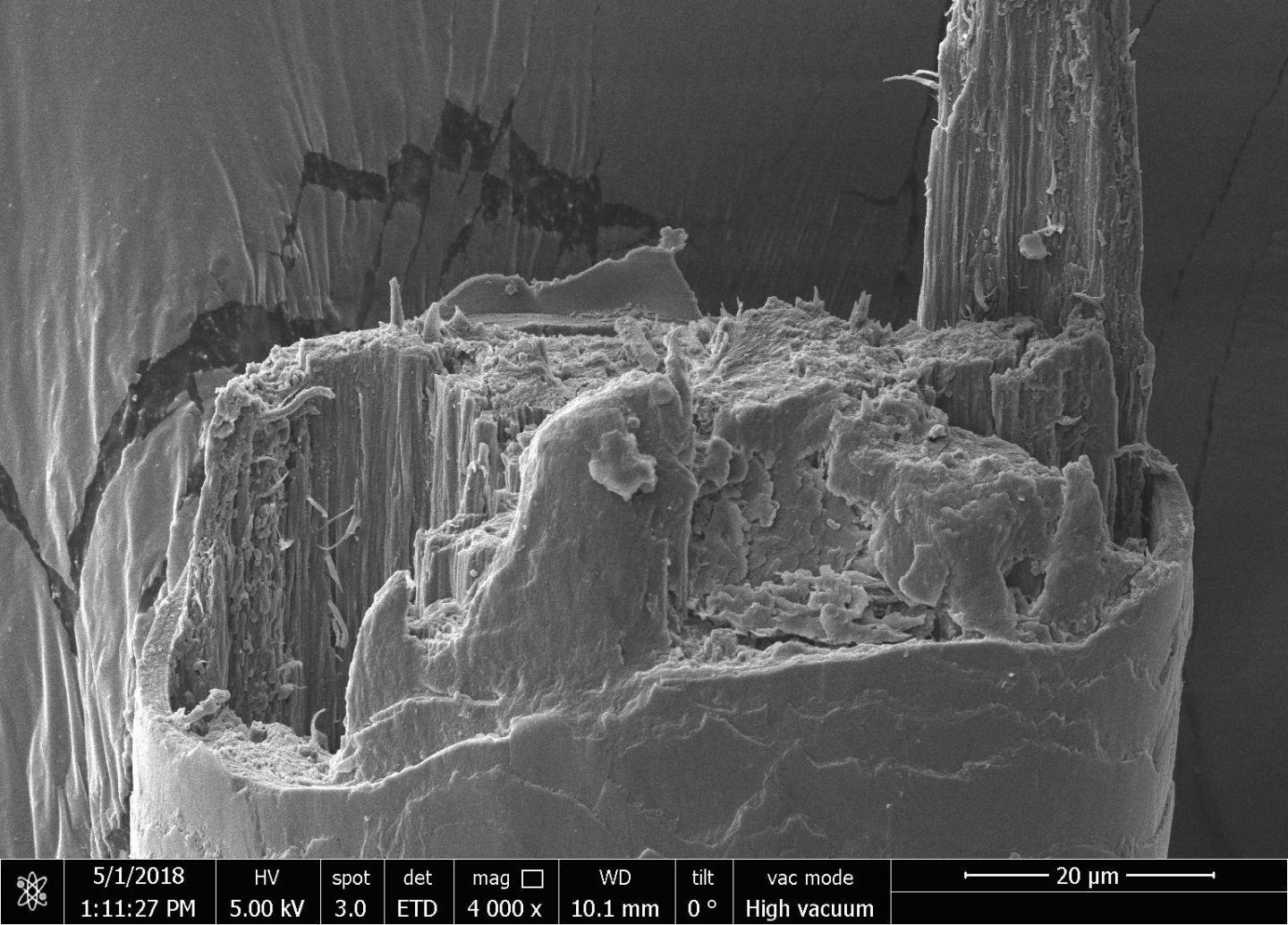 IMAGE: The image shows how protein fibers in the human hair cortex delaminate when the hair breaks, suggesting human hair fractures in a shear mode.

Despite being four times thicker than human hair, elephant hair is only half as strong--that's just one finding from researchers studying the hair strength of many different mammals. Their work, appearing in a paper publishing December 11 in the journal Matter, shows that thin hair tends to be stronger than thick hair because of the way that it breaks.

"We were very surprised by the result," says first author Wen Yang, a nanoengineering researcher at the University of California, San Diego. "Because, intuitively, we would think thick hair is stronger. Natural materials have undergone thousands of years of evolution, so to us, these materials are very well developed. We hope to learn from nature and develop synthetic products with comparable properties."

Previous studies have found that human hair has strength comparable to that of steel when adjusted for density. This is because of hair's hierarchical structure: human hair is composed of an outer layer called the cuticle that wraps around an inner cortex made of many small fibers linked by chemical bonds. Within each fiber, there are even smaller fibers embedded. This structural design allows hair, which is made of proteins, to be resistant to deformation.

Yang and her team, including researchers from the Meyers and Ritchie groups at University of California, San Diego, and University of California, Berkeley, were curious if hair from other animals shares similar characteristics. They collected hair samples from eight different mammals, including humans, bears, boars, horses, capybaras, javelinas, giraffes, and elephants. These hairs vary in thickness: human hair is as thin as 80 μm in diameter, while those of elephants and giraffes are over 350 μm in diameter.

The researchers tied individual strands of hair to a machine that gradually pulled them apart until they broke. To their surprise, they found thin hair was able to endure greater tension before it broke compared to thick hair. This also applied to hairs from the same species. For example, thin hair from a child was stronger than thicker hair from an adult.

By studying the broken hairs using a scanning electron microscope, the team found that although most hairs share a similar structure, they broke in different ways. Hairs with a diameter greater than 200 μm, such as those of boars, giraffes and elephants, tend to break in a normal fracture mode, a clean break similar to what would happen if a banana breaks in the middle. Hairs that are thinner than 200 μm, such as those of humans, horses and bears, break in a shear mode. The break is uneven, like when a tree branch is snapped in a storm. The distinction in cracking path is because the structural elements in different hairs interact differently.

"Shearing is when small zig-zag cracks are formed within the material as a result of stress," Yang says. "These cracks then propagate, and for some biological materials, the sample isn't completely broken until the small cracks meet. If a material shears, it means it can withstand greater tension and thus is tougher than a material that experiences a normal fracture."

"The notion of thick being weaker than thin is not unusual, and we have found that happening when studying brittle materials like metal wires," says co-author Robert Ritchie at the University of California, Berkeley. "This is actually a statistical thing, which is a bigger piece will have a greater possibility of having a defect. It's a bit surprising to see this in hair as hair is not a brittle material, but we think it's because of the same reason."

The researchers believe that their findings could help scientists design better synthetic materials. But Yang says her team's bio-inspired material manufacture is still at its infancy. Current technologies are not yet able to create materials that are as fine as hair and have a sophisticated hierarchical structure.

"There are many challenges in synthetic materials we haven't had a solution for, from how to manufacture very tiny materials to how to replicate the bonds between each layer as seen in natural hair," Yang says. "But if we can create metals that have a hierarchical structure like that of hair, we could produce very strong materials, which could be used as rescue ropes and for constructions."