Stretchable balloon electronics get to the heart of cardiac medicine

CHAMPAIGN, Ill. — Cardiologists may soon be able to place sensitive electronics inside their patients' hearts with minimal invasiveness, enabling more sophisticated and efficient diagnosis and treatment of arrhythmias.

A team of materials scientists, mechanical and electrical engineers, and physicians has successfully integrated stretchable electronics technology with standard endocardial balloon catheters. Led by John A. Rogers, the Lee J. Flory-Founder Chair in Engineering at Illinois, the team published its work in the March 6 online edition of Nature Materials.

The team previously demonstrated a sensor-laden sheet that could laminate to the surface of the heart in 2010. Now they have expanded their technology to endocardial balloon catheters, one of the most common, least-invasive devices for cardiac procedures.

Catheters are long, flexible tubes that can be threaded through a vein or artery to reach the inside of the heart. Catheters with balloons at the end are commonly used for angioplasty, stent placement and other procedures as passive mechanical instruments. When in place, the balloon inflates and gently presses against the surrounding tissue to open blood vessels or valves. 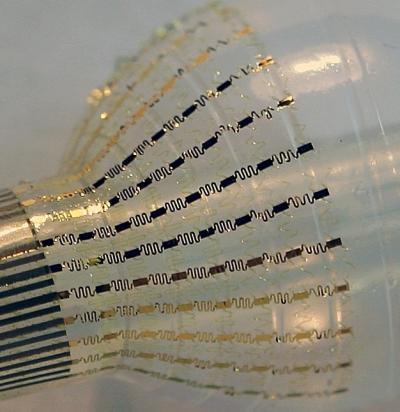 Invasive cardiologists specializing in heart rhythm disorders use catheters with electrodes at the end for detecting and mapping arrhythmias and for ablation, or selectively killing small patches of cells that beat off-rhythm. Current invasive arrhythmia procedures involve two separate, rigid catheter devices: one that maps the heart point-by-point as a cardiologist maneuvers the tube in search of irregularities, and one with an electrode at the end that ablates spots identified as aberrant, one at a time.

The balloon device Rogers' team developed can perform both functions over large areas of the heart simultaneously, using integrated arrays of multifunctional sensors and ablation electrodes.

"It's all in one, so it maps and zaps," said Rogers, a professor of materials science and engineering who also is affiliated with the Beckman Institute for Advanced Science and Technology at Illinois. "The idea here is instead of this single-point mapping and separate single-point zapping catheter, have a balloon that offers all that functionality, in a mode that can do spatial mapping in a single step. You just inflate it right into the cavity and softly push all of that electronics and functionality against the tissue."

The researchers created a meshwork of tiny sensor nodes that could mount directly onto a conventional catheter balloon. The device holds an array of sensors to measure electrical activity of the cardiac muscle, temperature, blood flow, and pressure as the balloon presses against the tissue, along with electrodes for ablation. The entire system is designed to operate reliably as the balloon inflates and deflates.

"It demands all the features and capabilities that we've developed in stretchable electronics over the years in a pretty aggressive way," Rogers says. "It also really exercises the technology in an extreme, and useful, manner – we put everything on the soft surface of a rubber balloon and blow it up without any of the devices failing." 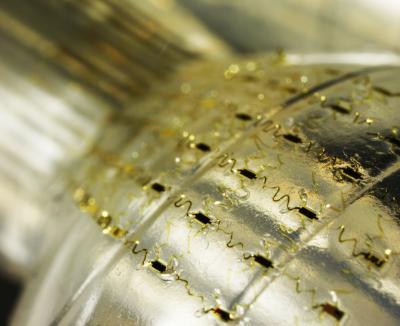 The Illinois team collaborated with cardiologists at the University of Arizona and Massachusetts General Hospital (MGH) to determine what types of features would be most useful for patient care.

"Adding a feature such as temperature detection and distribution gives us greater insight as to what we are actually doing to the tissue," said co-author Dr. Marvin J. Slepian, a practicing cardiologist and a professor of medicine at the Sarver Heart Center of the University of Arizona. "This will enhance the safety and effectiveness of ablation catheters, providing a new level of precision that we have not had to date, while simultaneously shortening the length of procedure times, which is an overall 'win' for patients, physicians and hospitals."

Rogers' team also worked closely with mc10, a company he co-founded that is commercializing the underlying technology for both medical and non-medical applications. Several researchers at mc10 are co-authors of the paper. The company has tested the devices in live animal experiments with medical collaborators at Arizona and MGH.

The biggest challenge for the researchers was ensuring full functionality of the electronics at all levels of balloon inflation. Since the center of the balloon stretches more than the ends, they had to figure out the range of strain the sensors would encounter and how to accommodate it so that sensors at the most strained points would function the same as those at areas of lower strain.

Through a collaboration with researchers at Northwestern University, led by Younggang Huang, the team solved this problem by mounting the sensors and electrodes on tiny rigid islands so they wouldn't be affected by the balloon stretching. They also used spring-like interconnects between the sensors to handle the 100 percent distance increase between the islands when the balloon inflates.

The fabrication techniques the engineers used in developing the balloon device could be exploited for integrating many classes of advanced semiconductor devices on a variety of surgical instruments. For example, the team also demonstrated surgical gloves with sensor arrays mounted on the fingertips to show that the electronics could be applied to other biomedical platforms.

Next, Rogers would like to further increase the density of sensors on the balloon, up to thousands of tiny, multiplexed devices on the surface. This design would enable the integration of sophisticated electronic systems with the capability for even greater resolution for mapping and the ability to ablate the minimal amount of tissue. He also plans to continue exploring medical device applications for stretchable, flexible electronic arrays in other surgical tools.

"Being able to embed these kinds of advanced semiconductor devices into tissue-like formats creates all kinds of new ways to do minimally invasive procedures," Rogers said. "I'm hopeful that this will be the first of many devices that collectively can have a major impact on the way human health care is done." 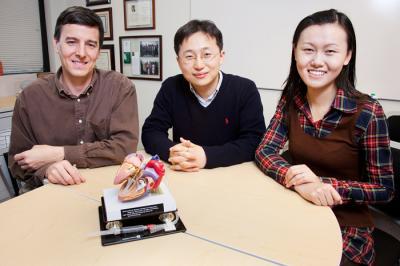 Source: University of Illinois at Urbana-Champaign