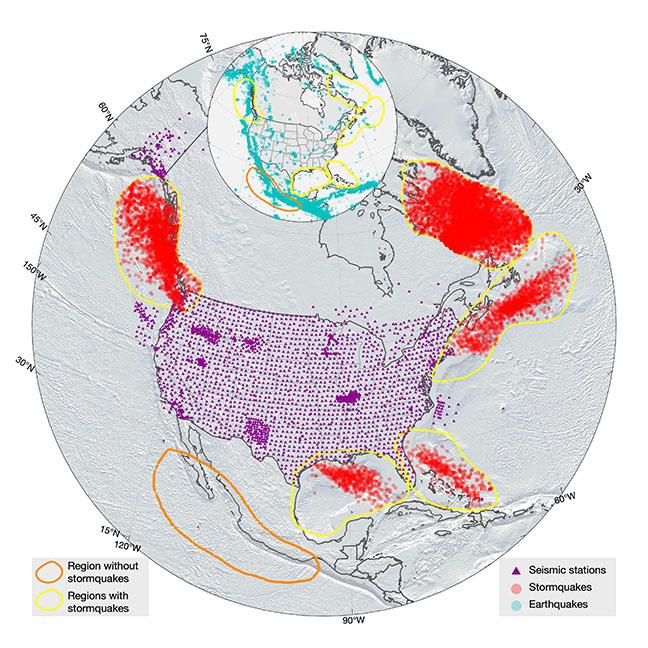 IMAGE: Stormquakes offshore North America (shown as red circles) and seismic stations (shown as triangles) from 2006 to 2015. Some of the apparent stormquake locations are on land due to location...

SAN DIEGO, December 6, 2019 -- Stormquakes are a recently discovered phenomenon characterized by seismic activity originating at the ocean floor due to powerful storms.

Catherine de Groot-Hedlin, a researcher at the Scripps Institution of Oceanography at the University of California, San Diego, was part of the group that first observed stormquakes. She will discuss their properties and meteorological significance during a session at the 178th Meeting of the Acoustical Society of America, which will take place Dec. 2-6, at the Hotel del Coronado in San Diego.

The talk, "Stormquakes: Tracing the path of ocean storms through the solid earth," will be presented at 9:10 a.m. PT (U.S.) on Friday, Dec. 6, as part of the session on marine seismoacoustics.

Heavy storms, like hurricanes or nor'easters, can create seismic waves as large as magnitude 3.5 quakes. These tremors caused by the effects of storms on the seafloor are what de Groot-Hedlin and her collaborators call stormquakes. An equivalent earthquake would be large enough to generate noticeable indoor shaking.

The track of the storm and the depth of the ocean at its location are key factors in determining whether a stormquake occurs.

"Most hurricanes we studied were strong as they passed north along Georgia to New Jersey but weakened into category 1 or even tropical storms by the time they hit offshore New England," said de Groot-Hedlin. "Despite this, stormquakes were only detectable off the coast of the New England region and Georges Bank, when the storms were weaker."

On the other hand, the storm's intensity does not play a critical role, though it must be strong enough to be able to transfer a certain amount of energy into the ocean. This energy transfer leads to strong pressure zones at the interaction between ocean waves and ocean banks.

"Stormquakes differ from seismic ambient noise in that their sources can be well located near the ocean banks as effective point seismic sources. Seismic noise is random, by contrast," she said.

The exact mechanisms that lead to the creation of stormquakes remain unknown.