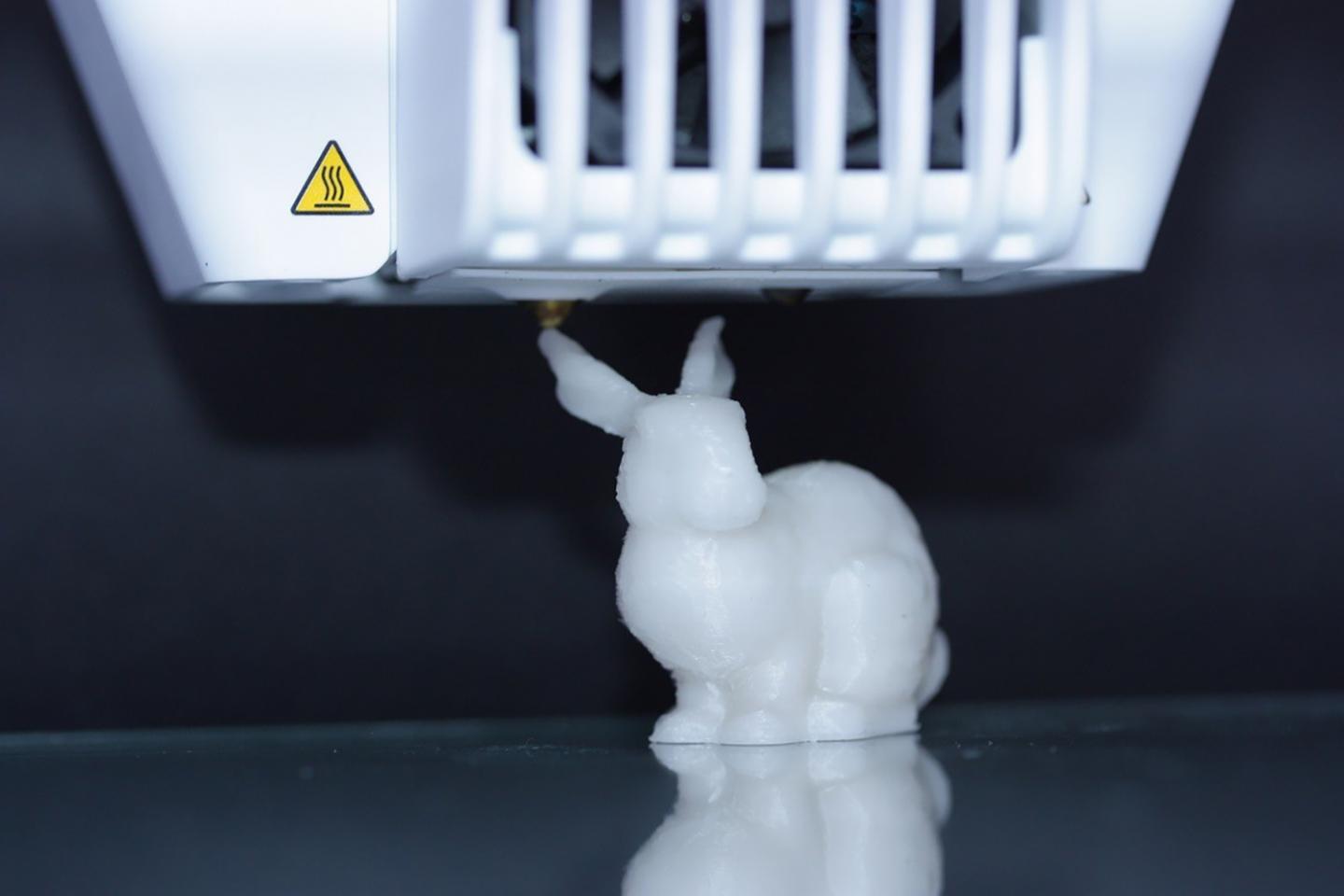 IMAGE: A 3D-printed plastic rabbit. The plastic contains DNA molecules in which the printing instructions have been encoded.

Living beings contain their own assembly and operating instructions in the form of DNA. That's not the case with inanimate objects: anyone wishing to 3D print an object also requires a set of instructions. If they then choose to print that same object again years later, they need access to the original digital information. The object itself does not store the printing instructions.

Researchers at ETH Zurich have now collaborated with an Israeli scientist to develop a means of storing extensive information in almost any object. "With this method, we can integrate 3D-printing instructions into an object, so that after decades or even centuries, it will be possible to obtain those instructions directly from the object itself," explains Robert Grass, Professor at the Department of Chemistry and Applied Biosciences. The way of storing this information is the same as for living things: in DNA molecules.

Several developments of the past few years have made this advance possible. One of them is Grass's method for marking products with a DNA "barcode" embedded in miniscule glass beads. These nanobeads have various uses; for example, as tracers for geological tests, or as markers for high-quality foodstuffs, thus distinguishing them from counterfeits. The barcode is relatively short: just a 100-bit code (100 places filled with "0"s or "1"s). This technology has now been commercialised by ETH spin-off Haelixa.

At the same time, it has become possible to store enormous data volumes in DNA. Grass's colleague Yaniv Erlich, an Israeli computer scientist, developed a method that theoretically makes it possible to store 215,000 terabytes of data in a single gram of DNA. And Grass himself was able to store an entire music album in DNA - the equivalent of 15 megabytes of data.

The two scientists have now wedded these inventions into a new form of data storage, as they report in the journal Nature Biotechnology. They call the storage form "DNA of Things", a takeoff on the Internet of Things, in which objects are connected with information via the internet.

As a use case, the researchers 3D printed a rabbit out of plastic, which contains the instructions (about 100 kilobytes' worth of data) for printing the object. The researchers achieved this by adding tiny glass beads containing DNA to the plastic. "Just like real rabbits, our rabbit also carries its own blueprint," Grass says.

And just like in biology, this new technological method retains the information over several generations - a feature the scientists demonstrated by retrieving the printing instructions from a small part of the rabbit and using them to print a whole new one. They were able to repeat this process five times, essentially creating the "great-great-great-grandchild" of the original rabbit.

"All other known forms of storage have a fixed geometry: a hard drive has to look like a hard drive, a CD like a CD. You can't change the form without losing information," Erlich says. "DNA is currently the only data storage medium that can also exist as a liquid, which allows us to insert it into objects of any shape."

A further application of the technology would be to conceal information in everyday objects, a technique experts refer to as steganography. To showcase this application, the scientists turned to history: among the scant documents that attest to life in the Warsaw Ghetto during World War II is a secret archive, which was assembled by a Jewish historian and ghetto resident at that time and hidden from Hitler's troops in milk cans. Today, this archive is listed on UNESCO's Memory of the World Register.

Grass, Erlich and their colleagues used the technology to store a short film [https://www.youtube.com/watch?v=yqcLlTbSXUg] about this archive (1.4 megabytes) in glass beads, which they then poured into the lenses of ordinary glasses. "It would be no problem to take a pair of glasses like this through airport security and thus transport information from one place to another undetected," Erlich says. In theory, it should be possible to hide the glass beads in any plastic objects that do not reach too high a temperature during the manufacturing process. Such plastics include epoxides, polyester, polyurethane and silicone.

Furthermore, this technology could be used to mark medications or construction materials such as adhesives or paints. Information about their quality could be stored directly in the medication or material itself, Grass explains. This means medical supervisory authorities could read test results from production quality control directly from the product. And in buildings, for example, workers doing renovations can find out which products from which manufacturers were used in the original structure.

At the moment the method is still relatively expensive. Translating a 3D-printing file like the one stored in the plastic rabbit's DNA costs around 2,000 Swiss francs, Grass says. A large sum of that goes towards synthesising the corresponding DNA molecules. However, the larger the batch size of objects, the lower the unit cost.