Whales use stealth to feed on fish 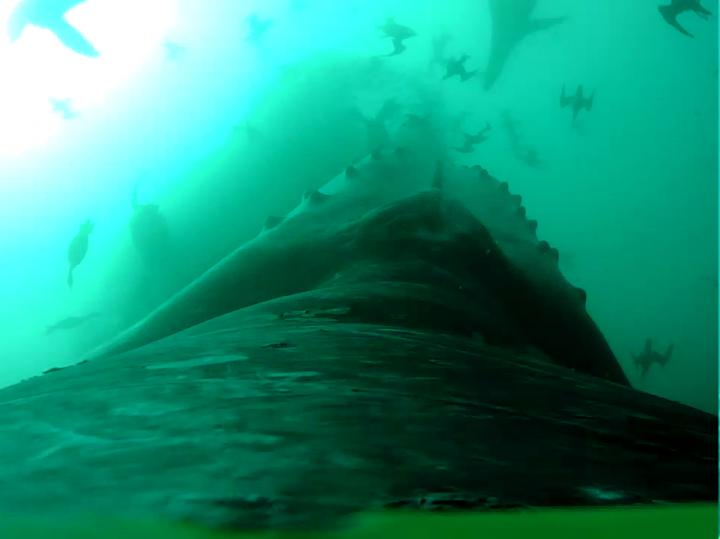 IMAGE: A humpback whale lunges at a large patch of anchovies while the anchovies are also under threat from sea lion and avian predators.

Small fish are speedy and easy to scare. So how is it that a giant humpback whale, attacking at speeds about as fast as a person jogs, is able to eat enough fish to sustain itself? Combining field studies, laboratory experiments and mathematical modeling, researchers at Stanford University have found a surprising answer to this seemingly paradoxical feat: Whales capture fish using stealth and deception.

From a conservation and ecological standpoint, this work also derived the first quantitative estimates of how many fish humpbacks consume in a single feeding event and over time.

"Lunge-feeding whales need dense concentrations of prey to forage effectively, yet fish schools could easily disperse and render lunge-feeding ineffective if they sensed a threat," said David Cade, lead author of the paper about this work, published Dec. 23 in Proceedings of the National Academy of Sciences. "We were interested in finding why these schools of fish did not run from this huge, looming predator."

The researchers conducted lab experiments to measure anchovies' escape reaction to a virtual whale - a widening dot, representing the expanding maw of a lunging whale. Models that informed how quickly the dot widened were based off recordings from whale-mounted video tags that the researchers deployed in Monterey Bay and Southern California. They then used results from these experiments to predict how many fish would escape from an oncoming whale based on their reaction times.

"One of the innovations of this study was to use predator data to inform the models we played back to fish," said Cade, who was a graduate student in the lab of Jeremy Goldbogen, assistant professor of biology at Stanford, during this research. "This allowed us to discover that the range of values at which a fish responds to an oncoming predator are all passed nearly simultaneously at a point when the whale opens its mouth, suggesting that by precisely timing its engulfment, the whale can avoid triggering escape responses in fish."

Through these experiments, models and field observations, the researchers determined that whales overcome shortcomings in speed and maneuverability by waiting to open their mouths until they are very close to the fish - essentially a whales' way of sneaking up on their prey. The researchers did not see the same delays in whales pursuing krill, which are less reactive to looming predators.

"This made sense when we realized that fish have been evolving to avoid being eaten by smaller predators for at least 100 million years, but lunge-feeding is a relatively new feeding strategy, evolutionarily speaking," said Cade.

Humpbacks, like other members of the rorqual whale group, engage in lunge-feeding. This means they lunge after prey, take in a volume of water that can be larger than their own body (thanks to expandable oral cavities) and then filter out the excess water before gulping down their catch. Opening the mouth, then, is hydrodynamically costly - like opening a parachute at high speeds, and feeding on fish requires the whales to time their lunging in ways that can be energetically costly. However, these costs are outweighed by the high energetic gains from captured prey: This research estimates that, for humpbacks, stealthy fish feeding is seven times more energetically efficient per lunge than feeding on krill.