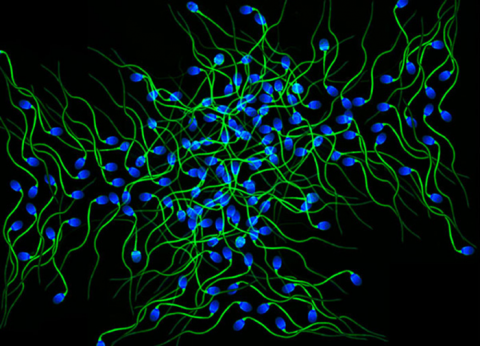 Mammalian sperm cannot fertilize an egg from the get-go. It’s an ability acquired only after insemination, during passage through the female reproductive tract, and requires two consecutive, time-sensitive processes to provide sperm with the physical and biochemical traits necessary to complete their fundamental job.

The first process is called capacitation, which alters the physiology of each spermatozoa, changing the membrane of the head to help it penetrate the hard, outer layer of an egg — the zona pellucida — and chemistry in the tail to generate greater motility, the ability to move and swim.

The second process is acrosome reaction (AR), a chemical action that involves releasing enzymes in the spermatozoa’s head that further boost penetration of the zona pellucida.

Both processes are essential to successful fertilization of an egg, and AR is time-dependent: It cannot take place too early or too late. Indeed, premature AR has been associated with idiopathic (spontaneous) male infertility.

Neither process, however, is well understood in terms of the underlying molecular mechanisms involved. In a new paper (GIV/Girdin, a non-receptor modulator for Gαi/s, regulates spatiotemporal signaling during sperm capacitation and is required for male fertility, eLife) a team of researchers at University of California San Diego School of Medicine detail how GIV/Girdin, a ubiquitous signaling molecule plays a critical role in male fertility, orchestrating capacitation and AR to promote sperm motility, survival and fertilization success.

Specifically, the research team, led by senior author Pradipta Ghosh, MD, professor in the departments of Medicine and Cellular and Molecular Medicine at UC San Diego School of Medicine, found that GIV—a member of the G protein family that serve as molecular switches inside cells, transmitting and fine-tuning signals—regulates the activity of enzymes that turn on and turn off the processes of capacitation and AR.

Infertility affects an estimated 8 to 12 percent of couples globally, with males being a primary or contributing factor in roughly half of all cases, according to published studies. Causes of male infertility are multiple, but roughly 25 percent involve either sperm transport disorders or idiopathic factors in sperm with no apparent dysfunction.

“GIV is required for male fertility, and low levels of GIV transcripts in men is invariably associated with infertility,” said Ghosh. “We’ve found evidence that GIV may perform different roles in the capacitation of sperm, findings that shed new light on both how defective GIV-signaling might be used as a potential marker for male infertility and how inhibitors of GIV-dependent signaling inhibit fertility by reducing sperm motility and viability and by promoting premature acrosome reaction.

“The latter, ironically enough, may be a promising strategy for development of a male contraceptive pill specifically targeting sperm.”