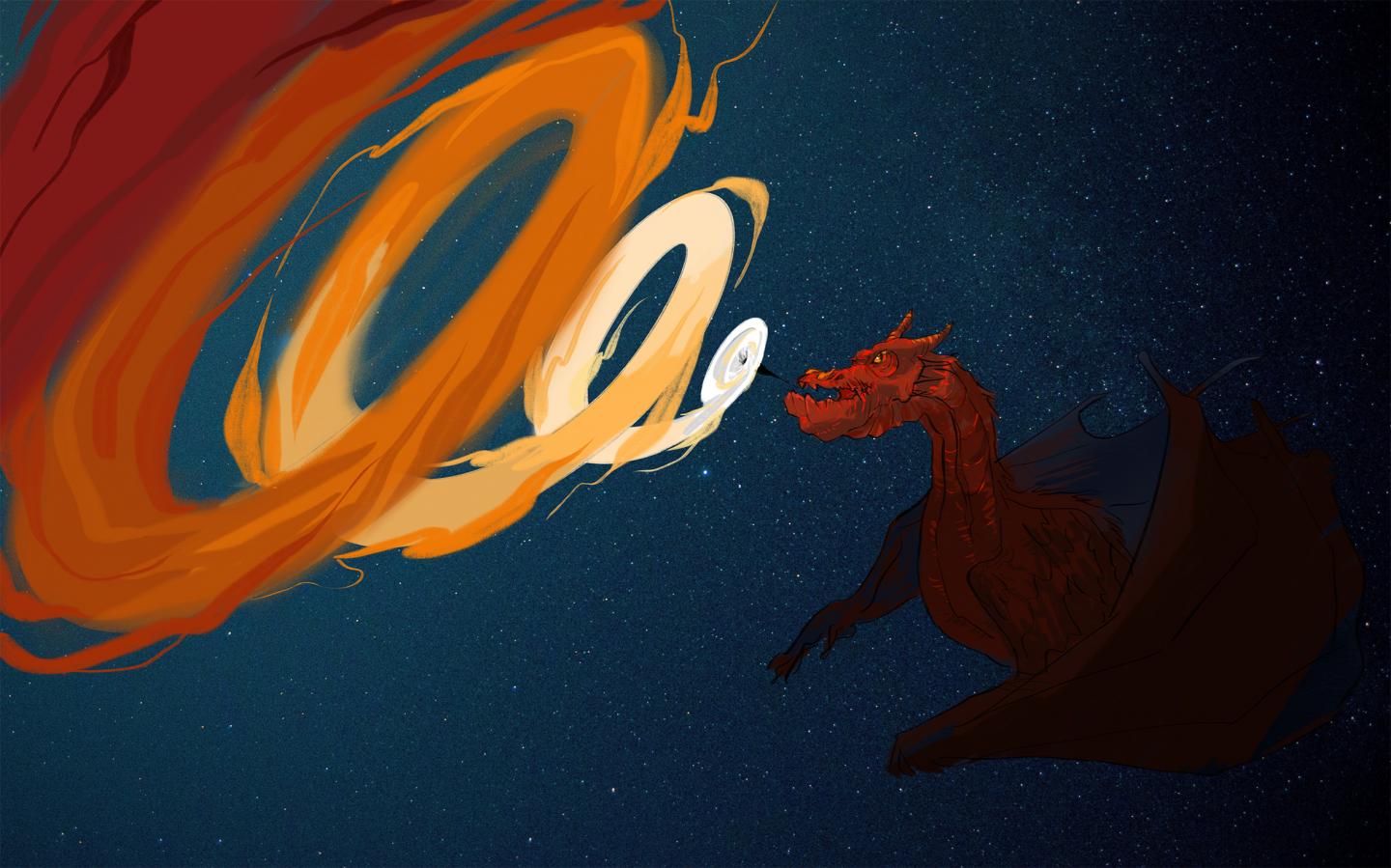 IMAGE: Like a starved dragon, the supermassive black hole in the center of quasar gobbles materials with endless appetite. These materials glares shiningly when gathering into an accretion disk before finally...

Image:
Image by CUI Jie, Universit of Science and Technoloy of China

Quasars are the Universe's brightest beacons; shining with magnitudes more luminosity than entire galaxies and the stars they contain. In the center of this light, at the heart of a quasar, researchers think, is an all-consuming black hole.

Researchers, for the first time, have observed the accelerated rate at which eight quasars consume interstellar fuel to feed their black holes.

They published their results on Sept 4th, Nature.

"As the most luminous steady beacons in the Universe, quasars are believed to be powered by an accretion disk around the central black hole," said Hongyan Zhou, paper author and faculty member at the University of Science and Technology of China. Zhou is also affiliated with the SOA Key Laboratory for Polar Science in the Polar Research Institute of China.

Zhou compared the black hole to a starved dragon.

"The supermassive black hole in the center of the quasar gobbles up an enormous amount of nearby materials, which glare and shine when they constitute an accretion disk before finally sliding down in the black hole," Zhou said. "Outside the accretion disk, materials are continuously pumped from all directions to the center by gravity to feed the black hole with an endless appetite."

An accretion disk is a spiraling mass of material centered around a monumental source of gravity consuming interstellar material--what researchers have theorized is a black hole. Much like how water empties out of a bathtub, the material spins much faster the closer it gets to the drain.

"We think this paradigm of black holes at the center of quasars is accurate, but fundamental questions remain unanswered: Is the accretion disk fueled with external mass? If so, how?" Zhou said.

The interstellar gas cannot be observed directly, as its radiation signature is overwhelmed by the accretion disk's brightness. Instead, researchers monitor for gas falling into the accretion disk that may pass through their line of sight. The gas makes a kind of eclipse between Earth and the accretion disk, casting lines onto the disk's spectrum of radiation.

The researchers used the Doppler effect to measure these lines and observe the velocity of gas feeding into the disk, toward the black hole. A classic Doppler effect example is how the pitch of a police siren drops once it passes. Astronomers call this passing pitch the "redshift" when measuring how quickly gases move toward an object away from Earth.

Zhou and his team measured velocities of 5,000 kilometers per second. For comparison, a passenger jet travels at less than a thousand kilometers per hour.

"Such a high velocity can only be accelerated by the strong gravity of the central black hole," Zhou said. "It's comparable to how, in a meteor shower, the closer the meteors get to the ground, the faster they fall."

In the quasars Zhou observed, the accretion disks were supplied with fast-falling external mass from surrounding space. The disks themselves then create inflows to the black hole.

Next, Zhou and his team plan to investigate exactly how these quasar "dragons" organize and differentiate the external mass from accretion disks to fuel inflows. According to Zhou, elucidation of this process could better inform the understanding of how quasars form, how long they last and when and how they end.

Credit:
University of Science and Technology of China
September 04, 2019