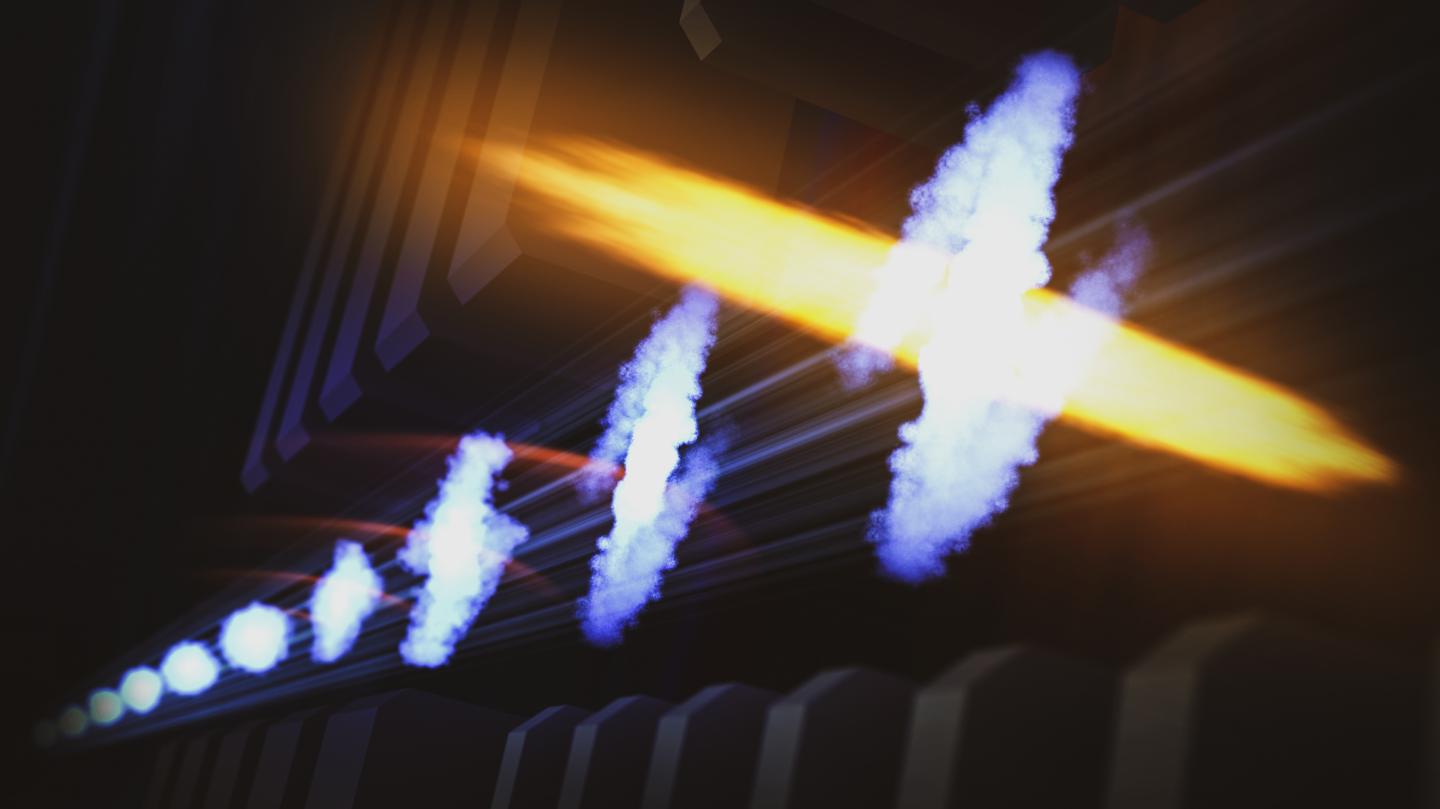 IMAGE: A SLAC-led team has invented a method, called XLEAP, that generates powerful low-energy X-ray laser pulses that are only 280 attoseconds, or billionths of a billionth of a second, long...

Menlo Park, Calif. -- Researchers at the Department of Energy's SLAC National Accelerator Laboratory have invented a way to observe the movements of electrons with powerful X-ray laser bursts just 280 attoseconds, or billionths of a billionth of a second, long.

The technology, called X-ray laser-enhanced attosecond pulse generation (XLEAP), is a big advance that scientists have been working toward for years, and it paves the way for breakthrough studies of how electrons speeding around molecules initiate crucial processes in biology, chemistry, materials science and more.

The team presented their method today in an article in Nature Photonics.

"Until now, we could precisely observe the motions of atomic nuclei, but the much faster electron motions that actually drive chemical reactions were blurred out," said SLAC scientist James Cryan, one of the paper's lead authors and an investigator with the Stanford PULSE Institute, a joint institute of SLAC and Stanford University. "With this advance, we'll be able to use an X-ray laser to see how electrons move around and how that sets the stage for the chemistry that follows. It pushes the frontiers of ultrafast science."

Studies on these timescales could reveal, for example, how the absorption of light during photosynthesis almost instantaneously pushes electrons around and initiates a cascade of much slower events that ultimately generate oxygen.

"With XLEAP we can create X-ray pulses with just the right energy that are more than a million times brighter than attosecond pulses of similar energy before," said SLAC scientist Agostino Marinelli, XLEAP project lead and one of the paper's lead authors. "It'll let us do so many things people have always wanted to do with an X-ray laser - and now also on attosecond timescales."

A leap for ultrafast X-ray science

One attosecond is an incredibly short period of time - two attoseconds is to a second as one second is to the age of the universe. In recent years, scientists have made a lot of progress in creating attosecond X-ray pulses. However, these pulses were either too weak or they didn't have the right energy to home in on speedy electron motions.

Over the past three years, Marinelli and his colleagues have been figuring out how an X-ray laser method suggested 14 years ago could be used to generate pulses with the right properties - an effort that resulted in XLEAP.

In experiments carried out just before crews began work on a major upgrade of SLAC's Linac Coherent Lightsource (LCLS) X-ray laser, the XLEAP team demonstrated that they can produce precisely timed pairs of attosecond X-ray pulses that can set electrons in motion and then record those movements. These snapshots can be strung together into stop-action movies.

Linda Young, an expert in X-ray science at DOE's Argonne National Laboratory and the University of Chicago who was not involved in the study, said, "XLEAP is a truly great advance. Its attosecond X-ray pulses of unprecedented intensity and flexibility are a breakthrough tool to observe and control electron motion at individual atomic sites in complex systems."

X-ray lasers like LCLS routinely generate light flashes that last a few millionths of a billionth of a second, or femtoseconds. The process starts with creating a beam of electrons, which are bundled into short bunches and sent through a linear particle accelerator, where they gain energy. Travelling at almost the speed of light, they pass through a magnet known as an undulator, where some of their energy is converted into X-ray bursts.

The shorter and brighter the electron bunches, the shorter the X-ray bursts they create, so one approach for making attosecond X-ray pulses is to compress the electrons into smaller and smaller bunches with high peak brightness. XLEAP is a clever way to do just that.

At LCLS, the team inserted two sets of magnets in front of the undulator that allowed them to mold each electron bunch into the required shape: an intense, narrow spike containing electrons with a broad range of energies.

"When we send these spikes, which have pulse lengths of about a femtosecond, through the undulator, they produce X-ray pulses that are much shorter than that," said Joseph Duris, a SLAC staff scientist and paper co-first-author. The pulses are also extremely powerful, he said, with some of them reaching half a terawatt peak power.

To measure these incredibly short X-ray pulses, the scientists designed a special device in which the X-rays shoot through a gas and strip off some of its electrons, creating an electron cloud. Circularly polarized light from an infrared laser interacts with the cloud and gives the electrons a kick. Because of the light's particular polarization, some of the electrons end up moving faster than others.

"The technique works similar to another idea implemented at LCLS, which maps time onto angles like the arms of a clock," said Siqi Li, a paper co-first-author and recent Stanford PhD. "It allows us to measure the distribution of the electron speeds and directions, and from that we can calculate the X-ray pulse length."

Next, the XLEAP team will further optimize their method, which could lead to even more intense and possibly shorter pulses. They are also preparing for LCLS-II, the upgrade of LCLS that will fire up to a million X-ray pulses per second - 8,000 times faster than before. This will allow researchers to do experiments they have long dreamed of, such as studies of individual molecules and their behavior on nature's fastest timescales.