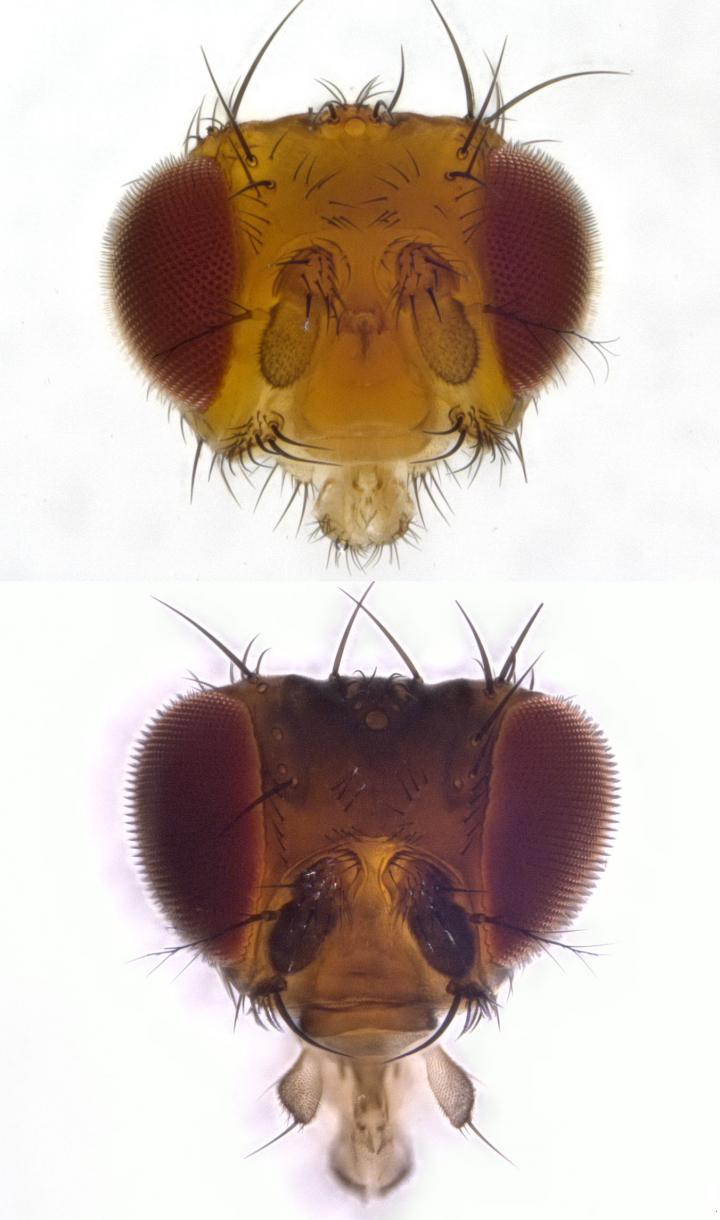 IMAGE: This figure shows heads from D. melanogaster (top) and D. pseudoobscura (bottom) with different proportions of eyes and antennae.

Image:
A. Ramaekers and N. Grillenzoni

Trade-offs in the sizes of visual and olfactory organs are a common feature of animal evolution, but the underlying genetic and developmental mechanisms have not been clear. A study publishing August 22 in the journal Developmental Cell reveals that a single DNA variant that affects the timing of sensory organ development in fruit flies could explain the size trade-off between eyes and antennae, potentially providing a quick route to behavioral changes and adaptation.

Because the affected gene, eyeless/Pax6, is conserved across invertebrates and vertebrates, including humans, the discovery could represent a general mechanism for sensory organ size trade-offs across the animal kingdom.

The senses animals rely on have been shaped through evolution to better navigate and exploit the environment. As a result, even closely related species living in different ecological niches show variation in the sizes and shapes of their sensory structures. In arthropods such as fruit flies, trade-offs between the size of the eyes and of the antennae, where most olfactory organs are located, are pervasive.

"What we demonstrate is that there are consequences to subtle changes in the conserved mechanisms that govern how these sense organs develop," says senior study author Bassem Hassan of Institut du Cerveau et de la Moelle épinière (ICM). "What this means more broadly is that one cannot fully understand how genetic variation and morphological variation relate to each other without understanding the developmental processes that translate the former into the latter."

"These data suggest that, despite 17 to 30 million years of separated evolution between the two species groups, ommatidia number variation between D. mel. and D. pse. and between two D. mel. strains share a common developmental logic," Hassan says.

Additional analyses showed that this variant occurs in natural fruit fly populations, and the A allele corresponds to both more ommatidia and smaller antennal width among different laboratory strains. Using CRISPR/Cas9 to introduce the A allele into a G-homozygous stock, the researchers demonstrated that the G>A substitution causes an increase in the number of ommatidia.

"We were surprised by the simplicity of the mechanism of sensory trade-offs that we identified: To vary sensory organ size--in this case, eye versus antennae--it suffices to slightly vary the expression of a single gene," Ramaekers says. "It was particularly satisfactory to find that this gene, called Pax6, is the same one that builds the eye in all animals, including humans. We were also surprised that what matters to generate a trade-off is to change when, rather than where, Pax6 ends up being expressed. To make the eye bigger or smaller, it is sufficient to slightly speed up or slow down the subdivision of the head primordium into eye versus non-eye territories."

For the authors, the findings raise several intriguing questions. For example, it's not yet clear how the single-nucleotide variant changes the timing of Pax6 expression and sensory organ development. Moreover, it's possible that controlling the timing of the expression of key developmental genes could be a general rule for changing the size of a tissue or organ. Another interesting question is whether sensory brain regions are affected by changes in the relative sizes of sensory organs.