Simulating tomorrow's accelerators at near the speed of light

As conventional accelerators like CERN's Large Hadron Collider grow ever more vast and expensive, the best hope for the high-energy machines of the future may lie in "tabletop" accelerators like BELLA (the Berkeley Lab Laser Accelerator), now being built by the LOASIS program at the U.S. Department of Energy's Lawrence Berkeley National Laboratory (Berkeley Lab). BELLA, a laser-plasma wakefield accelerator, is remarkably compact. In just one meter a single BELLA stage will accelerate an electron beam to 10 billion electron volts, a fifth the energy achieved by the two-mile long linear accelerator at the SLAC National Accelerator Laboratory.

But realizing the promise of laser-plasma accelerators crucially depends on being able to simulate their operation in three-dimensional detail. Until now such simulations have challenged or exceeded even the capabilities of supercomputers.

A team of researchers led by Jean-Luc Vay of Berkeley Lab's Accelerator and Fusion Research Division (AFRD) has borrowed a page from Einstein to perfect a revolutionary new method for calculating what happens when a laser pulse plows through a plasma in an accelerator like BELLA. Using their "boosted-frame" method, Vay's team has achieved full 3-D simulations of a BELLA stage in just a few hours of supercomputer time, calculations that would have been beyond the state of the art just two years ago.

Not only are the recent BELLA calculations tens of thousands of times faster than conventional methods, they overcome problems that plagued previous attempts to achieve the full capacity of the boosted-frame method, such as violent numerical instabilities. Vay and his colleagues, Cameron Geddes of AFRD, Estelle Cormier-Michel of the Tech-X Corporation in Denver, and David Grote of Lawrence Livermore National Laboratory, publish their latest findings in the March, 2011 issue of the journal Physics of Plasma Letters.

The boosted-frame method, first proposed by Vay in 2007, exploits Einstein's Theory of Special Relativity to overcome difficulties posed by the huge range of space and time scales in many accelerator systems. Vast discrepancies of scale are what made simulating these systems too costly.

"Most researchers assumed that since the laws of physics are invariable, the huge complexity of these systems must also be invariable," says Vay. "But what are the appropriate units of complexity? It turns out to depend on how you make the measurements." 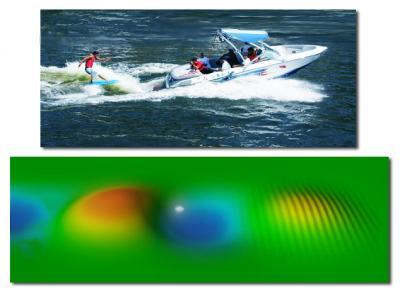 Like a speedboat leaving a wake that a surfer can ride, a laser pulse in a laser-plasma wakefield accelerator creates a wake in the plasma that an electron beam "surfs" to high energy. The ridges at bottom right are the laser pulse, which drives the wake as it speeds through the plasma. Colors in the wake represent intense electric fields: the decelerating fields (orange) and accelerating fields (blue) drive the electrons (white) to high energy.

Laser-plasma wakefield accelerators are particularly challenging: they send a very short laser pulse through a plasma measuring a few centimeters or more, many orders of magnitude longer than the pulse itself (or the even-shorter wavelength of its light). In its wake, like a speedboat on water, the laser pulse creates waves in the plasma. These alternating waves of positively and negatively charged particles set up intense electric fields. Bunches of free electrons, shorter than the laser pulse, "surf" the waves and are accelerated to high energies.

"The most common way to model a laser-plasma wakefield accelerator in a computer is by representing the electromagnetic fields as values on a grid, and the plasma as particles that interact with the fields," explains Geddes, a member of the BELLA science staff who has long worked on laser-plasma acceleration. "Since you have to resolve the finest structures – the laser wavelength, the electron bunch – over the relatively enormous length of the plasma, you need a grid with hundreds of millions of cells."

The laser period must also be resolved in time, and calculated over millions of time steps. As a result, while much of the important physics of BELLA is three-dimensional, direct 3-D simulation was initially impractical. Just a one-dimensional simulation of BELLA required 5,000 hours of supercomputer processor time at Berkeley Lab's National Energy Research Scientific Computing Center (NERSC).

The key to reducing complexity and cost lies in choosing the right point of view, or "reference frame." When Albert Einstein was 16 years old he imagined riding along in a frame moving with a beam of light – a thought experiment that, 10 years later, led to his Theory of Special Relativity, which establishes that there is no privileged reference frame. Observers moving at different velocities may experience space and time differently and even see things happening in a different order, but calculations from any point of view can recover the same physical result.

Among the consequences are that the speed of light in a vacuum is always the same; compared to a stationary observer's experience, time moves more slowly while space contracts for an observer traveling near light speed. These different points of view are called Lorentz frames, and changing one for another is called a Lorentz transformation. The "boosted frame" of the laser pulse is the key to enabling calculations of laser-plasma wakefield accelerators that would otherwise be inaccessible.

A simulation of laser-plasma acceleration in the laboratory frame. The wavefronts of laser light are the red and blue disks at right; the fields in the wake are colored from pale blue (accelerating) to orange (decelerating). Electrons accelerated by the first of many buckets in the wake are shown in white at right. Both the laser and the wakefield buckets must be resolved over the entire domain of the plasma, requiring many cells and many time steps. Researchers often use a simulation window that moves with the pulse, but this is not a true transformation of frame and reduces only the multitude of cells, not the multitude of time steps.

A laser pulse pushing through a tenuous plasma moves only a little slower than light through a vacuum. An observer in the stationary laboratory frame sees it as a rapid oscillation of electromagnetic fields moving through a very long plasma, whose simulation requires high resolution and many time steps. But for an observer moving with the pulse, time slows, and the frequency of the oscillations is greatly reduced; meanwhile space contracts, and the plasma becomes much shorter. Thus relatively few time steps are needed to model the interaction between the laser pulse, the plasma waves formed in its wake, and the bunches of electrons riding the wakefield through the plasma. Fewer steps mean less computer time.

Early attempts to apply the boosted-frame method to laser-plasma wakefield simulations encountered numerical instabilities that limited how much the calculation frame could be boosted. Calculations could still be speeded up tens or even hundreds of times, but the full promise of the method could not be realized.

Vay's team showed that using a particular boosted frame, that of the wakefield itself – in which the laser pulse is almost stationary – realizes near-optimal speedup of the calculation. And it fundamentally modifies the appearance of the laser in the plasma. In the laboratory frame the observer sees many oscillations of the electromagnetic field in the laser pulse; in the frame of the wake, the observer sees just a few at a time.

Not only is speedup possible because of the coarser resolution, but at the same time numerical instabilities due to short wavelengths can be suppressed without affecting the laser pulse. Combined with special techniques for interpreting the data between frames, this allows the full potential of the boosted-frame principle to be reached.

"We produced the first full multidimensional simulation of the 10 billion-electron-volt design for BELLA," says Vay. "We even ran simulations all the way up to a trillion electron volts, which establishes our ability to model the behavior of laser-plasma wakefield accelerator stages at varying energies. With this calculation we achieved the theoretical maximum speedup of the boosted-frame method for such systems – a million times faster than similar calculations in the laboratory frame."

Simulations will still be challenging, especially those needed to tailor applications of high-energy laser-plasma wakefield accelerators to such uses as free-electron lasers for materials and biological sciences, or for homeland security or other research. But the speedup achieves what might otherwise have been virtually impossible: it puts the essential high-resolution simulations within reach of new supercomputers.

A simulation of the same system in the boosted frame of the wake, moving at near lightspeed. Space has contracted, so that the laser wavelengths and the buckets in the wake have similar proportions. Time has stretched, so that first the laser interacts with the plasma, then the buckets are formed one at a time, and finally the electron beam is accelerated. Because of the separation of events in time, the laser has already left the plasma (in yellow rectangle) when the bucket accelerates the beam. Relatively few time steps are needed to model the events, which means less computer time.