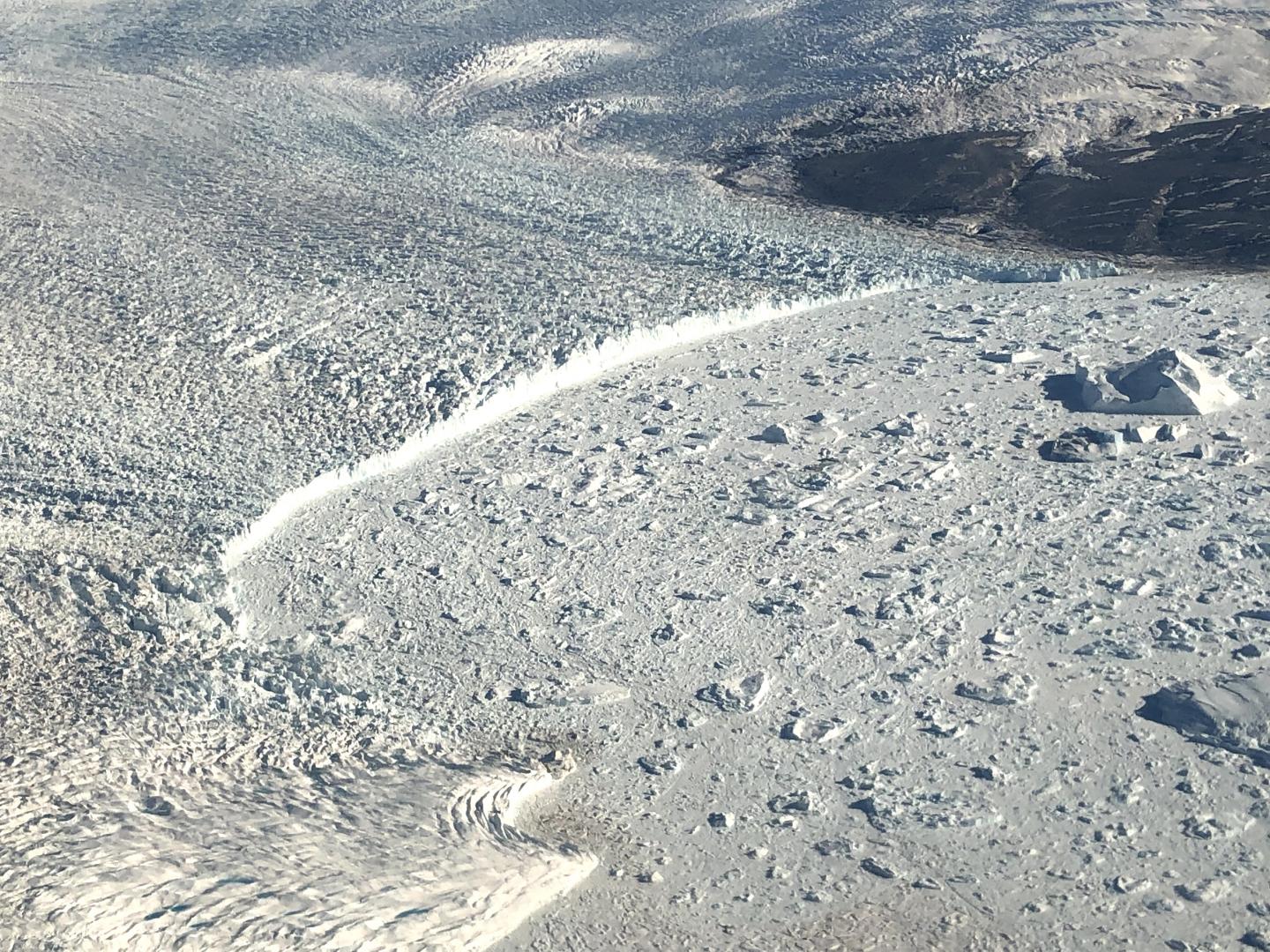 IMAGE: In a presentation at the annual meeting of the American Geophysical Union, scientists released satellite images that, for the first time, show how fast Greenland's glaciers are retreating. The image...

SAN FRANCISCO - Satellite data has given scientists clues about how, when and why Greenland's glaciers are shrinking - and shows a sharp increase in glacial retreat beginning about 2000, according to new research presented this week.

In a presentation at the annual meeting of the American Geophysical Union, scientists released time-lapse satellite images dating back 34 years of about 200 glaciers on the island of Greenland. The images are the first to compare Greenland's glacier retreat - when a glacier shrinks back from the ocean, pulling inland - and the speed at which the glaciers are retreating.

"These glaciers are calving more ice into the ocean than they were in the past," said Michalea King, who presented the research at AGU. King is a graduate student in earth sciences at The Ohio State University. "We're finding this clear correlation where more retreat instigates greater discharge of ice."

To evaluate the glaciers, King analyzed images from the NASA-U.S. Geological Survey's Landsat missions, an ongoing project to monitor the Earth's surface from space. The satellites survey much of the Earth's surface; scientists at AGU also presented on changes to glaciers and ice fields in Alaska and Antarctica.

"One thing we've noticed is that retreat has been a pattern that we've seen across the ice sheets in Greenland," King said. "It's not just limited to one region."

That means the glaciers are not just shrinking in one part of the ice sheet covering Greenland - in the north or south, for example - but that most glaciers across the country have retreated.

The satellite imagery, which, for King's study, dates back to 1985, showed Greenland's glaciers have retreated about 3 miles (5 kilometers) between 1985 and 2018. That data also shows that in 2000, that retreat began accelerating. In 2000, she said, the rate of ice calving - the phenomenon by which chunks of ice break off the glacier and tumble into the ocean - began to increase. In recent years, the data shows that about 50 gigatons more ice per year calves into the ocean than what scientists observed prior to 2000.

That matters for the glacier's size: Prior to 2000, the ice that calved from the glacier was roughly equivalent to the amount of snow that accumulated on the ice sheet - essentially, the mass lost to calving was a wash, because it was replaced by new snowfall.

But after 2000, that equilibrium went out of whack: The glacier is losing ice faster than snow is falling to replace it.

"The ice sheet is out of balance," King said.

And while calving is just one way in which glaciers shrink - meltwater also affects how fast a glacier can flow - it is an important component for a glacier's health, King said.

She said the year 2000 is noteworthy for one reason: In that year, scientists saw glaciers across Greenland begin to retreat more rapidly.

"Their fronts had retreated further inland, which allowed the ice to flow faster, and that brought more ice into the ocean," she said.

King said the triggers for that retreat vary by region, but in southeast Greenland, the retreat was largely caused by warming ocean waters that melted the front of the glaciers.

The satellite images show that, overall, most of the glaciers across Greenland have lost mass, King said.

"There is a very clear relationship between the retreat and increasing ice mass losses from these glaciers during the 1985-through-present record."