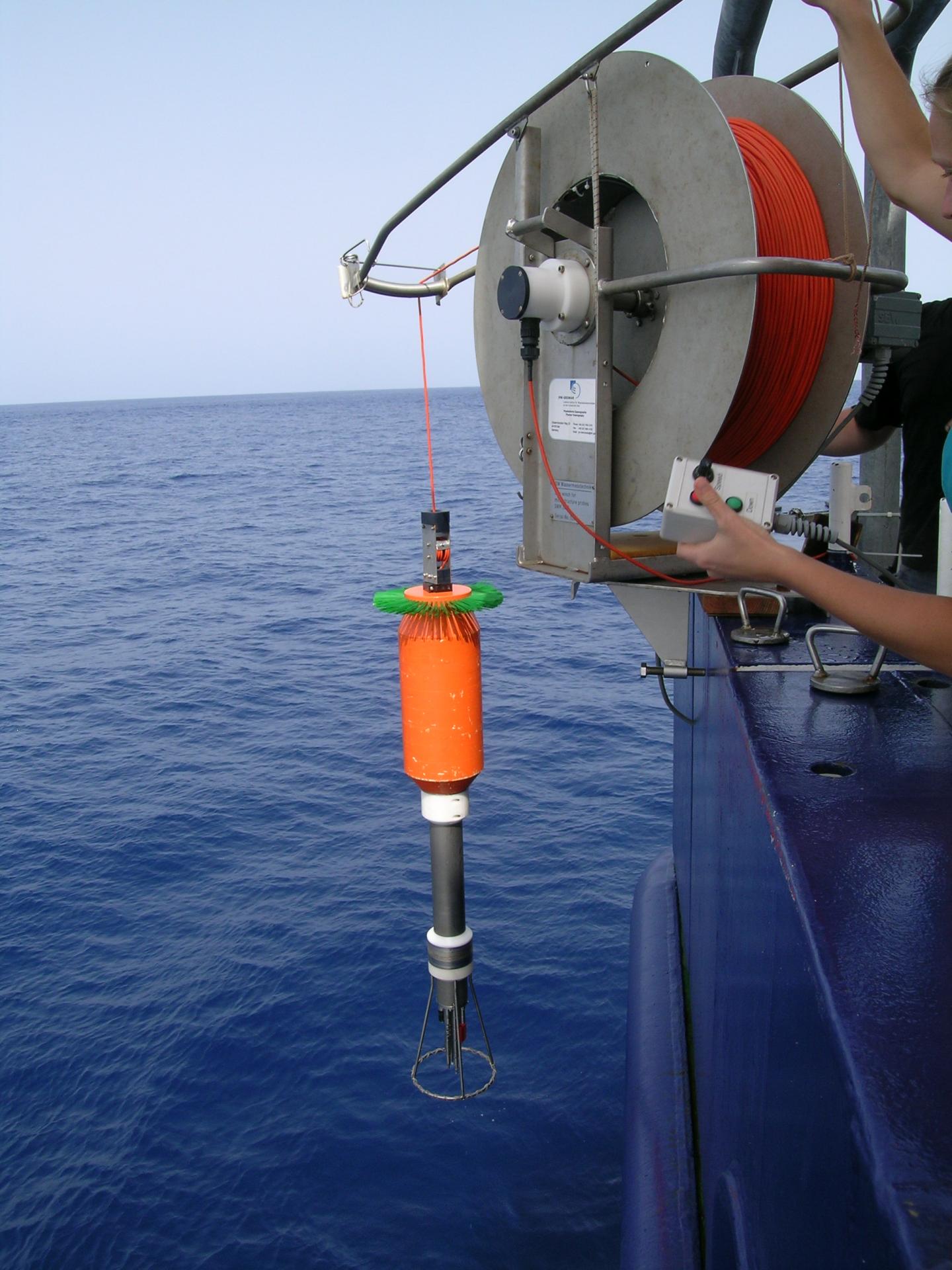 IMAGE: Microstructure probe at the stern of the Meteor when launching with the instrument's own winch. The fast fading of the orange Kevlar cable allows the turbulence measurements to be carried...

Sea surface temperatures in the tropics have a major influence on the climate in the tropics and the adjacent continents. For example, they determine the position of the Intertropical Convergence Zone and the beginning and strength of the West African monsoon. Therefore, it is important to understand the variability of sea surface temperatures for climate predictions. Until now, the seasonal cycle of sea surface temperature in the tropical North Atlantic could not be sufficiently explained. "More precisely, the sea surface is colder than predicted by the combination of previous direct observations of solar radiation, currents and mixing, especially in the summer months from July to September", explains Dr. Rebecca Hummels from the GEOMAR Helmholtz Centre for Ocean Research Kiel and first author of a study now published in Nature Communications.

Ship-based observations with the German research vessel METEOR in September 2015 provided first measurements of a strong turbulent mixing event below the sea surface, where mixing was up to a factor of 100 higher than previously observed at this location. "When we noticed the greatly enhanced turbulence in the water column during data processing, we at first suspected a malfunction of our sensors," says Dr. Marcus Dengler, co-author of the study. "But when we also noticed strong currents at the ocean surface, we became curious". Precisely such events can explain the lower temperatures at the ocean surface.

"We were able to isolate the process behind this strong mixing event, which lasted only for a few days," explains Dr. Hummels. "It is a so-called inertial wave, which is a very short but intense flow event," Hummels continues. Inertial waves are horizontal wave phenomena in which the current at the surface rotates clockwise with time, whereas the movement rapidly decays with increasing depth. The different velocities at the surface and in the layer below cause instabilities and ultimately mixing between the warm water in the surface layer and the colder water below. Such inertial waves can be caused by brief variations in the near-surface winds. Up to now, generally only weak currents have been observed in this region and the rather steady trade winds at this time of year did not suggest particularly strong mixing events. However, wind variations are crucial to trigger these waves in the upper ocean. The winds do not have to be particularly strong, but ideally should rotate the same way the ocean currents do. Since such wind fluctuations are relatively rare and only last a few days, it has not yet been possible to measure such a strong wave phenomenon with the associated strong mixing in this region.

After the discovery of this event during the METEOR cruise in September 2015, the Kiel scientists wanted to know more about the frequency and the actual impact of such events. "Through model-based data analysis, we were able to give a context to the in-situ observations", explains co-author Dr. Willi Rath from the Research Unit Ocean Dynamics at GEOMAR. "Together, we have scanned 20 years of global wind observations looking for similar events triggered by wind fluctuations and described their occurrence in the region and during the course of the year", Dr. Rath adds. This has supported the hypothesis that the temporal and spatial distribution of such events can indeed explain the gap in the heat balance of the upper ocean.

The strong turbulent mixing caused by the inertial waves at the base of the surface layer is also crucial for biology: For example, the cold water that is mixed into the surface layer during such an event also brings nutrients from deeper layers into the upper ocean penetrated by sunlight. "This also explains the hitherto largely unexplained occurrence of chlorophyll blooms in this region, which could now also be attributed to the seasonally increased occurrence of these inertial waves," explains Dr. Florian Schütte, also co-author of the study.

The ship measurements in the tropical Atlantic were carried out in close cooperation with the international PIRATA program. For more than 20 years, the PIRATA surface buoys have been providing valuable data for studies of ocean-atmosphere interaction, which were also used for this study. "Indeed, the intensive mixing measurements resulted from a failure in the hydraulic system of the METEOR, which made other measurements impossible at that time", says Prof. Dr. Peter Brandt, chief scientist of the expedition. Despite buoys and series of ship expeditions to this region, new phenomena are still being discovered - sometimes by chance - which decisively advance our understanding of the tropical climate.