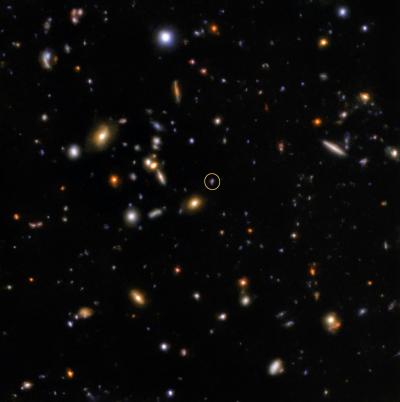 Incredibly fast and faint, these events are notoriously difficult to catch

EVANSTON, Ill. -- The farther away an object lies in the universe, the fainter it appears through the lens of a telescope.

So when a Northwestern University-led team of astrophysicists detected an afterglow of a short gamma ray burst (SGRB) located 10 billion light years away, they were shocked. Afterglows, after all, are already incredibly faint and fast signals -- sometimes lasting mere hours.

Known as SGRB181123B, the burst occurred just 3.8 billion years after the Big Bang. It is the second most-distant well-established SGRB ever detected and the most distant event with an optical afterglow.

"We certainly did not expect to discover a distant SGRB, as they are extremely rare and very faint," said Northwestern's Wen-fai Fong, a senior author of the study. "We perform 'forensics' with telescopes to understand its local environment, because what its home galaxy looks like can tell us a lot about the underlying physics of these systems."

"We believe we are uncovering the tip of the iceberg in terms of distant SGRBs," said Kerry Paterson, the study's first author. "That motivates us to further study past events and intensely examine future ones."

The study will be published on July 14 in the Astrophysical Journal Letters.

Fong is an assistant professor of physics and astronomy in Northwestern's Weinberg College of Arts and Sciences and a member of CIERA (Center for Interdisciplinary Exploration and Research in Astrophysics). Paterson is a postdoctoral associate in CIERA.

Some of the most energetic and brightest explosions in the universe, SGRBs most likely occur when two neutron stars merge. This merger causes a short-lived burst of gamma rays, which is the most energetic form of light. Astronomers typically only detect seven or eight SGRBs each year that are well-localized enough for further observations. And because their afterglows typically last, at most, a few hours before fading into oblivion, they rarely linger long enough for astronomers to get a close look.

With follow-up observations using Gemini-South in Chile, MMT in Arizona and Keck in Hawaii, the team realized SGRB181123B may be more distant than most.

"We were able to obtain deep observations of the burst mere hours after its discovery," Paterson said. "The Gemini images were very sharp, allowing us to pinpoint the location to a specific galaxy in the universe."

"With SGRBs, you won't detect anything if you get to the sky too late," Fong added. "But every once in a while, if you react quickly enough, you will land on a really beautiful detection like this."

A glimpse into 'cosmic high noon'

To uncover the SGRB's distance from Earth, the team then accessed a near-infrared spectrograph on Gemini-South, which can probe redder wavelengths. By taking a spectrum of the host galaxy, the researchers realized they had serendipitously uncovered a distant SGRB.

After identifying the host galaxy and calculating the distance, Fong, Paterson and their team were able to determine key properties of the parent stellar populations within the galaxy that produced the event. Because SGRB181123B appeared when the universe was only about 30% of its current age -- during an epoch known as "cosmic high noon" -- it offered a rare opportunity to study the neutron star mergers from when the universe was a "teenager."

When SGRB181123B occurred, the universe was incredibly busy, with rapidly forming stars and fast-growing galaxies. Massive binary stars need time to be born, evolve and die -- finally turning into a pair of neutron stars that eventually merge.

"It's long been unknown how long neutron stars -- in particular those that produce SGRBs -- take to merge," Fong said. "Finding an SGRB at this point in the universe's history suggests that, at a time when the universe was forming lots of stars, the neutron star pair may have merged fairly rapidly."