The secret to a long life? For worms, a cellular recycling protein is key 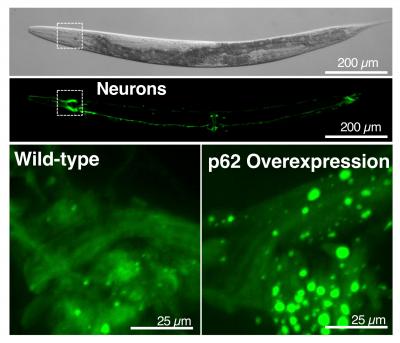 IMAGE: Surprisingly large "recycling plants, " or vesicles, appeared in worms that produce excess levels of the p62 protein, akin to a "cellular recycling truck. " These worms lived a week longer than...

LA JOLLA, CALIF. - December 11, 2019 - Scientists at Sanford Burnham Prebys Medical Discovery Institute have shown that worms live longer lives if they produce excess levels of a protein, p62 or SQSTM1, which recognizes toxic cell proteins that are tagged for destruction. The discovery, published in Nature Communications, could help uncover treatments for age-related conditions, such as Alzheimer's disease, which are often caused by accumulation of misfolded proteins.

"Research, including our own, has shown that lifespan can be extended by enhancing autophagy--the process cells use to degrade and recycle old, broken and damaged cell components," says Malene Hansen, Ph.D., a professor in the Development, Aging and Regeneration Program at Sanford Burnham Prebys and senior author of the study. "Prior to this work, we understood that autophagy as a process was linked to aging, but the impact of p62, a selective autophagy protein, on longevity was unknown."

Scientists used to think that cellular recycling worked the same way for all waste products. In more recent years, researchers are learning that autophagy can be highly selective--meaning the cell uses distinct "recycling trucks," such as the protein p62, to deliver different types of trash to cellular "recycling centers." For example, p62 is known to selectively deliver aggregated proteins and worn-out mitochondria (the powerplants of the cell) to recycling centers.

To better understand p62's role in cellular recycling and longevity, the scientists used short-lived, transparent roundworms called C. elegans for their studies. Previously, Hansen's team found that levels of p62 are increased after a short heat shock is administered to the worms. This proved to be beneficial to the animals and required for the longevity that is caused by mild heat stress.

These findings prompted the scientists to genetically engineer C. elegans to produce excess levels of the protein p62. Instead of their usual three-week lifespan, these worms lived for a month--equivalent to a 20 to 30% lifespan extension. The researchers were intrigued to find that by increasing the levels of p62, the "recycling truck," the "recycling centers" became more abundant and were able to recycle more "trash," indicating that p62 is a driver of the recycling process.

"Now that we have confirmed that selective autophagy by p62 is important for longevity, at least in C. elegans, we can move to our next step: identifying what harmful cellular 'trash' it is removing. With this knowledge, we hope to target specific cell components that are risk factors for longevity," says Caroline Kumsta, Ph.D., a research assistant professor in Hansen's lab and lead and co-corresponding author of the study.

Many age-related diseases, including Alzheimer's and Huntington's disease, are caused by accumulation of toxic, misfolded proteins. Scientists are hopeful that studying selective autophagy via proteins like p62 could lead to therapies that clear the proteins that are detrimental to living a long, healthy life. Finding possible therapeutic avenues to age-related diseases is increasingly important as the U.S. population ages: In about a decade, about 20 percent of Americans--about 71 million people--will be 65 and older and at higher risk for chronic diseases.

While the scientists see much potential in their findings--and are encouraged that the benefits of increasing p62 levels on longevity seem to be evolutionarily conserved as a recent study in fruit flies demonstrated--they urge caution for direct translations to humans: High levels of p62 have been shown to be associated with cancer in humans.

"Given the known link between p62 and cancer, it's even more important to map the selective autophagy process from start-to-finish," says Hansen. "Armed with this information, we may be able to enhance beneficial functions for p62 in selective autophagy and find therapeutics that promote healthy aging."