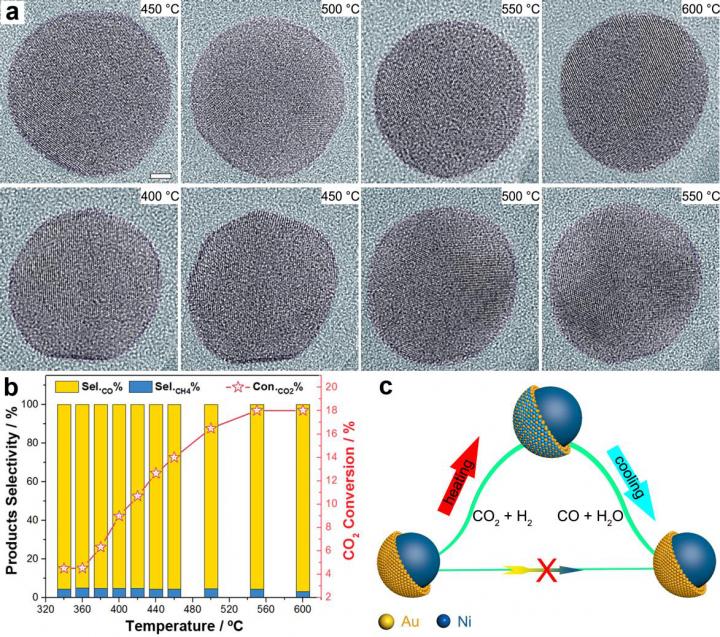 For years, core-shell structured particles have been recognized as well-designed catalysts that can facilitate reaction activity owing to their distinct synergism at the interface.

Recently, by using a combination of in situ methods, Dr. LIU Wei and his colleagues from the Dalian Institute of Chemical Physics (DICP) of the Chinese Academy of Sciences have found that the core-shell configuration of a Ni-Au catalyst was lost during the actual reaction and recovered afterwards. The Ni-Au alloy as the real active surface can solely be observed via in situ microscopy. The results were published in Nature Catalysis.

As for core-shell nanoparticles - one of the most popular heterogeneous catalysts - it is accepted that their catalytic properties derive from the synergy of electronics and geometry between the core and shell layer.

However, lack of direct in situ evidence visualizing the localized atomic coordination/arrangement during real reactions impedes our understanding of actual structure-activity mechanism and core-shell functionality.

The researchers from DICP described the real catalytic surface of a Ni-Au bimetallic catalyst. Without in situ characterization, it showed no difference from any other reported core-shell catalysis. Its high CO selectivity (>95%) (Fig. 1b) could be attributed to the well-controlled ultra-thin (about two atoms thick) Au shell, since a nickel catalyst always yields methane.

However, by using environmental transmission electron microscopy to directly visualize the dynamic process at the atomic level (Fig. 1a), the researchers disclosed that the core-shell structure contributed nothing to the reactivity because the core-shell Ni-Au kinetically transformed into a Ni-Au alloy during the reaction and dramatically reverted to the core-shell configuration after the reaction (Fig. 1c).

This discovery has been well supported by results from multiple in situ techniques, including synchrotron X-ray spectroscopy and infrared spectroscopy as well as theoretical simulations.

This finding regarding core-shell nanoparticles overturns our conventional understanding. As a result, researchers may begin to question whether core-shell catalysts are really in core-shell structure under working conditions or not. The discovery of this hidden transformation also indicates that efforts to synthesize core-shell structures may be unnecessary in some reactions.