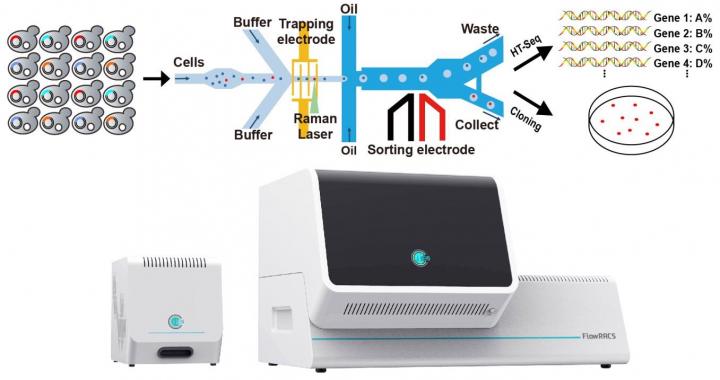 IMAGE: Schematic illustration of the FlowRACS platform and instrument

Enzymes are molecules that catalyze metabolisms. Discovery and mining of enzymes, such as those producing oils or fixing carbon dioxide, have been a key mission of the biotechnology industry. However, this mission can be very slow and tedious.

To tackle this key challenge, Chinese scientists have now developed a flow mode Raman-activated cell sorter (RACS), called FlowRACS, to support high-throughput discovery of enzymes and their cell factories, at the precision of just one microbial cell. The study was published in Science Advances on August 7.

Microbial cells and their enzyme products mediate numerous biological processes. The mining of useful enzymes and microbial cells that produce them has dated back nearly one century. However, such endeavors can be very slow and difficult, due to the tiny size of microbes - 1000 times smaller than a human cell. Moreover, most of the microbial cells cannot be readily cultured - for this reason, they are called by microbiologists as the "biological dark matter".

To address these challenges, a team of scientists from Single-Cell Center in Qingdao Institute of Bioenergy and Bioprocess Technology (QIBEBT), Chinese Academy of Sciences (CAS), introduced a novel instrument called FlowRACS. "This is a flow-mode Raman-activated Cell Sorter that can sort microbial cells and enzymes they produced, based on Single-cell Raman Spectrum and in a high-throughput manner," said Prof. MA Bo, Deputy Director of Single-Cell Center and a senior author of the study.

Single-cell Raman Spectrum can reveal the metabolic function of a cell, such as the kind of oils produced or the rate of carbon dioxide fixed, without destroying the cell. Based on these signals, cells are sorted in RACS. If the cells are sitting still during sorting, this would be easier, but very slow. To speed up the sorting, cells can be lined up and moved rapidly through a spectrum detection point one by one. However, such flow-mode RACS can be much more difficult, due to the very small size of microbial cells and the very weak Raman signal.

To improve the process, researchers applied positive dielectrophoresis (pDEP), which can capture or mobilize particles. This allows trapping fast-moving single microbial cells, processing them precisely yet rapidly through a Raman detection point to recognize those cells that produce particular enzymes or metabolites, and then packaging cells into droplets. In the end, the droplets that harbor target cells are sorted. In this pDEP Raman-activated droplet sorting, or pDEP-RADS, the cells do not require culturing, labeling or invasive action in order to be sorted and identified at a high speed.

Diacylglycerol acyltransferases, or DGATs, are enzymes that produce triacylglycerols (TAGs) which are main ingredient of human and animal fats as well as plant oils. However, traditionally, screening of DGATs has been extremely tedious. For each sample, culture of DGAT-producing cells can take days and subsequent analysis of the cells for oil ingredients can also take days.

Using FlowRACS, the researchers screened yeasts that express DGAT candidates for its TAG content and profile, at about 120 cells per minute, equivalent to 120 of the traditional "samples" per minute. They also sorted cells for the degree of unsaturation, a key characteristic of TAG that determines its nutritional value, with about 82% accuracy and at 40 cells per minute.

A single run of FlowRACS, which takes just ten minutes, revealed all our previously reported DGAT variants. In contrast, discovering and characterizing these enzymes would have either taken months for culture-based methods, or simply been not possible due to insufficient sensitivity of fluorescence-activated cell sorting.

"Such culture-free, label-free and non-invasive sorting of enzyme activity in vivo can save time, consumable and labor by one to two orders of magnitude, as compared to conventional approaches," said, Dr. WANG Xixian, first author of the paper.

"To our knowledge, this is the first demonstration of RACS for enzyme discovery," added Prof. XU Jian, Director of Single-Cell Center and the other senior author of the study, "The birth of FlowRACS greatly expands the application of RACS. The community is now equipped with a new instrument for the discovery and mining of the 'biological dark matter' for not just cells but enzymes, both wonderful gifts from Mother Nature."