Scientists inch closer than ever to signal from cosmic dawn 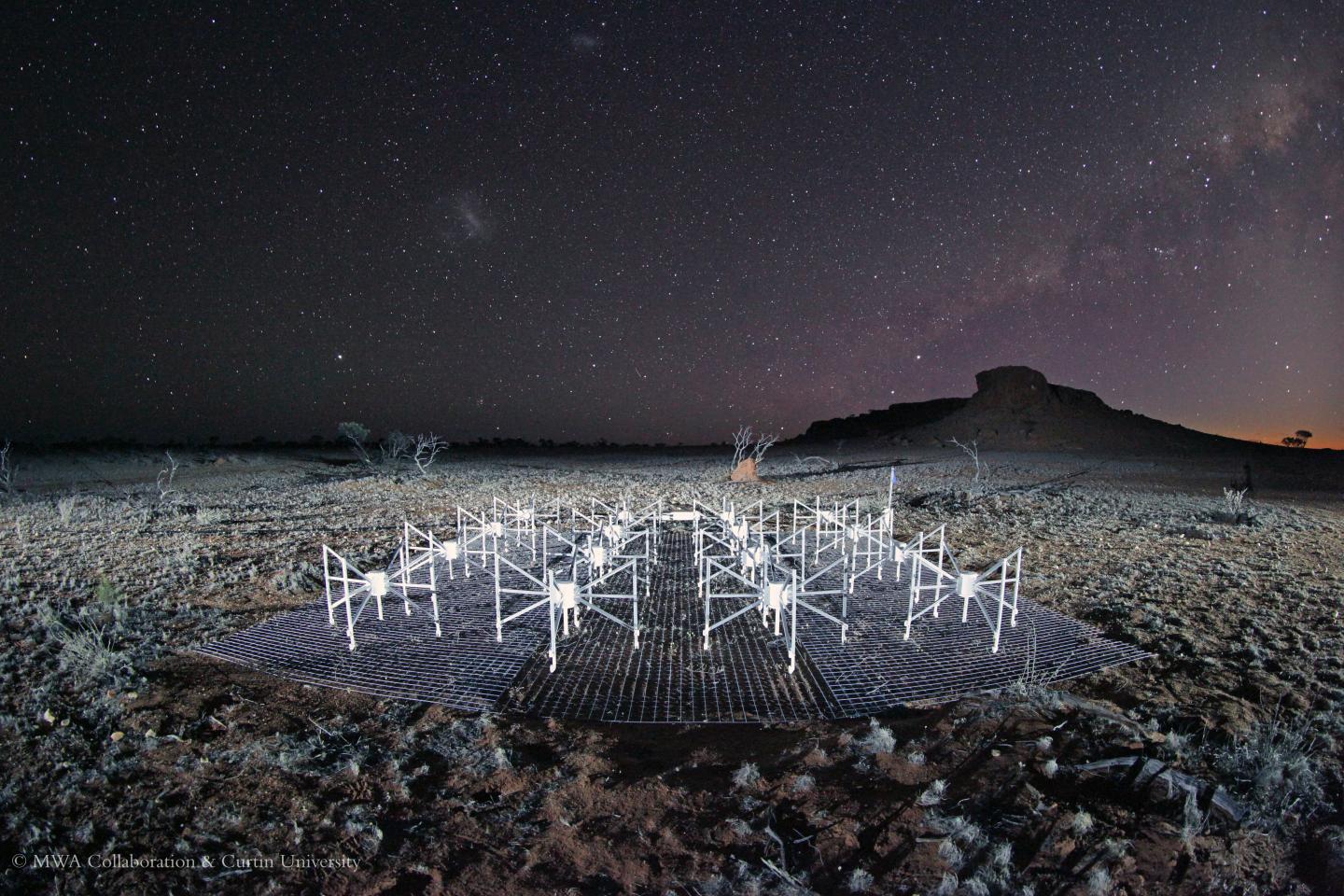 IMAGE: The Murchison Widefield Array radio telescope, a portion of which is pictured here, is searching for a signal emitted during the formation of the first stars in the universe.

PROVIDENCE, R.I. [Brown University] -- Around 12 billion years ago, the universe emerged from a great cosmic dark age as the first stars and galaxies lit up. With a new analysis of data collected by the Murchison Widefield Array (MWA) radio telescope, scientists are now closer than ever to detecting the ultra-faint signature of this turning point in cosmic history.

In a paper on the preprint site ArXiv and soon to be published in the Astrophysical Journal, researchers present the first analysis of data from a new configuration of the MWA designed specifically to look for the signal of neutral hydrogen, the gas that dominated the universe during the cosmic dark age. The analysis sets a new limit -- the lowest limit yet -- for the strength of the neutral hydrogen signal.

"We can say with confidence that if the neutral hydrogen signal was any stronger than the limit we set in the paper, then the telescope would have detected it," said Jonathan Pober, an assistant professor of physics at Brown University and corresponding author on the new paper. "These findings can help us to further constrain the timing of when the cosmic dark ages ended and the first stars emerged."

The research was led by Wenyang Li, who performed the work as a Ph.D. student at Brown. Li and Pober collaborated with an international group of researchers working with the MWA.

Despite its importance in cosmic history, little is known about the period when the first stars formed, which is known as the Epoch of Reionization (EoR). The first atoms that formed after the Big Bang were positively charged hydrogen ions -- atoms whose electrons were stripped away by the energy of the infant universe. As the universe cooled and expanded, hydrogen atoms reunited with their electrons to form neutral hydrogen. And that's just about all there was in the universe until about 12 billion years ago, when atoms started clumping together to form stars and galaxies. Light from those objects re-ionized the neutral hydrogen, causing it to largely disappear from interstellar space.

The goal of projects like the one happening at MWA is to locate the signal of neutral hydrogen from the dark ages and measure how it changed as the EoR unfolded. Doing so could reveal new and critical information about the first stars -- the building blocks of the universe we see today. But catching any glimpse of that 12-billion-year-old signal is a difficult task that requires instruments with exquisite sensitivity.

When it began operating in 2013, the MWA was an array of 2,048 radio antennas arranged across the remote countryside of Western Australia. The antennas are bundled together into 128 "tiles," whose signals are combined by a supercomputer called the Correlator. In 2016, the number of tiles was doubled to 256, and their configuration across the landscape was altered to improve their sensitivity to the neutral hydrogen signal. This new paper is the first analysis of data from the expanded array.

Neutral hydrogen emits radiation at a wavelength of 21 centimeters. As the universe has expanded over the past 12 billion years, the signal from the EoR is now stretched to about 2 meters, and that's what MWA astronomers are looking for. The problem is there are myriad other sources that emit at the same wavelength -- human-made sources like digital television as well as natural sources from within the Milky Way and from millions of other galaxies.

"All of these other sources are many orders of magnitude stronger than the signal we're trying to detect," Pober said. "Even an FM radio signal that's reflected off an airplane that happens to be passing above the telescope is enough to contaminate the data."

To home in on the signal, the researchers use a myriad of processing techniques to weed out those contaminants. At the same time, they account for the unique frequency responses of the telescope itself.

"If we look at different radio frequencies or wavelengths, the telescope behaves a little differently," Pober said. "Correcting for the telescope response is absolutely critical for then doing the separation of astrophysical contaminants and the signal of interest."

Those data analysis techniques combined with the expanded capacity of the telescope itself resulted in a new upper bound of the EoR signal strength. It's the second consecutive best-limit-to-date analysis to be released by MWA and raises hope that the experiment will one day detect the elusive EoR signal.

"This analysis demonstrates that the phase two upgrade had a lot of its desired effects and that the new analysis techniques will improve future analyses," Pober said. "The fact that MWA has now published back-to-back the two best limits on the signal gives momentum to the idea that this experiment and its approach has a lot of promise."