Scientists finally figure out how millipedes actually do it 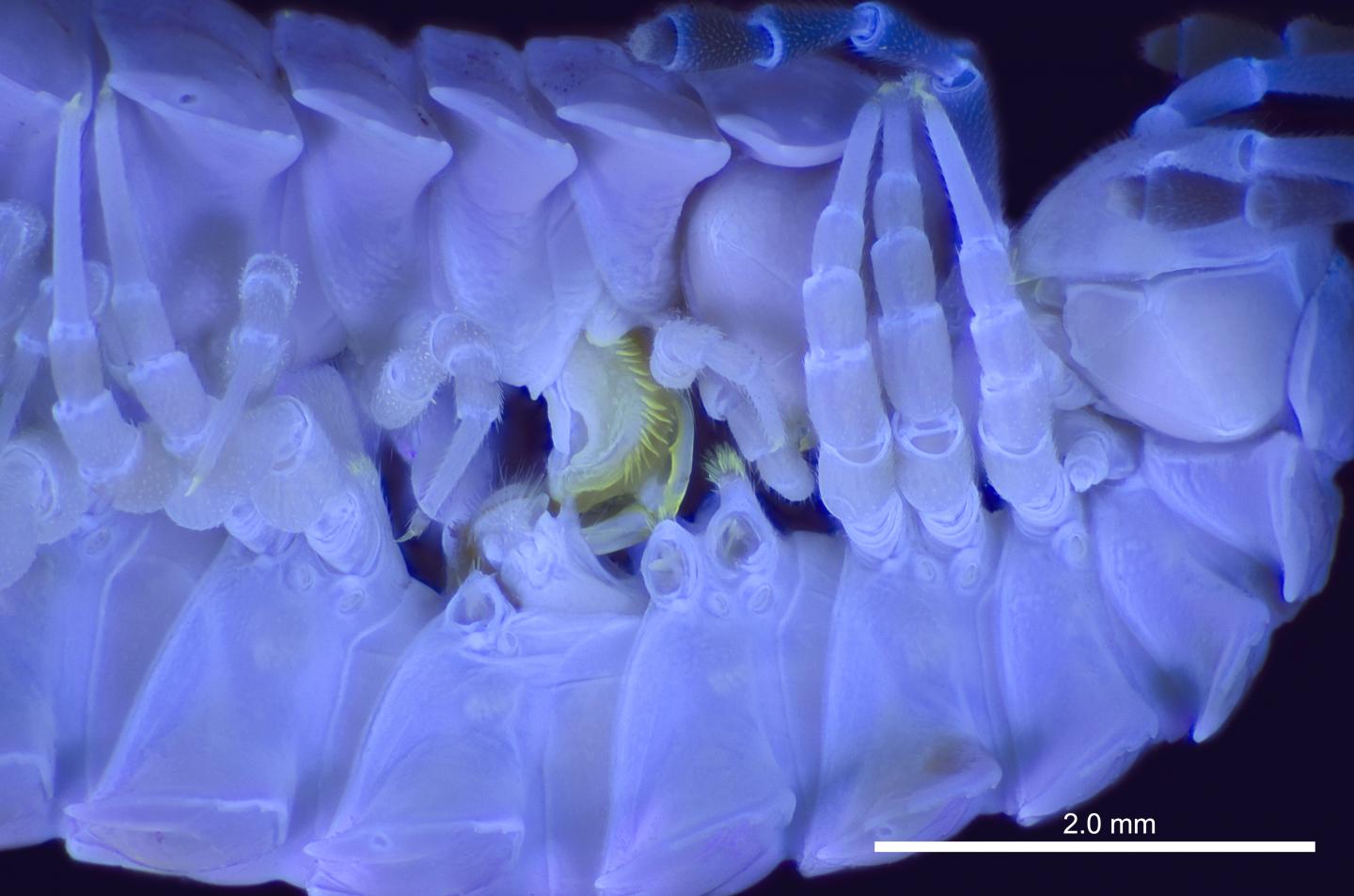 IMAGE: A mating pair of Pseudopolydesmus millipedes, viewed under UV light so that the structures of their genitals would show up better.

Scientists have a pretty good handle on how the birds and the bees work, but it comes to mating, almost all millipedes have been a mystery--until now. For the first time, researchers have puzzled out how these tiny creatures' complex genitalia work, thanks to new imaging techniques and blacklights that make the different tissues glow. The findings are published in a new paper in the journal Arthropod Structure and Development.

"This is the first time we've been able to understand these millipedes' mechanism of insertion, how the male and female organs interact with each other. Before this, we had no idea how he would actually get the sperm into her," says Petra Sierwald, an associate curator at the Field Museum in Chicago and one of the paper's authors.

Millipedes are centipedes' chill vegetarian cousins. They're in a different animal group from insects and spiders, but they're part of the same big umbrella of arthropods. They have dozens of legs, but they're slow movers--they eat decaying plants, so they don't need to be speedy to catch a meal.

"Millipedes are mulch munchers," says Sierwald. "They are in waste management, and they're very good at it."

There are over 13,000 different species of millipedes known to science (with many more discovered every year), and they each have their own unique way of mating. The genus that Sierwald and her colleagues focused on in this study, Pseudopolydesmus, is made up of half-inch-long brown millipedes from North America. They're not too exciting to look at, but their behavior makes them stand out to scientists: they're unusually eager to mate, even in laboratory conditions.

"One of the problems with millipedes is that they do a lot of things while they are dug into the ground, and if you take them out, you will disturb them and they'll stop what they're doing," says Sierwald. Not Pseudopolydesmus, though. "They will even mate in the lab in the Petri dish under the light."

But while Pseudopolydesmus are the exhibitionists of the millipede world, it's still hard to see exactly what's going on down there--there are a lot of legs in the way.

"This paper has been a long time in the making. It started out when I found a pair of this genus, a male and female, in copula, sort of attached. Their legs were obscuring everything," says Sierwald.

To solve this problem, Sierwald and her colleague, Field Museum co-author Stephanie Ware, experimented with different lighting and imaging techniques. Ware took dozens of photographs of the tiny subjects at slightly varying distances, and then used a computer program to stack the images together and combine them so that all the miniscule details were in focus. so She took photos in both natural and ultraviolet light conditions since the millipedes' genitals glow under UV light, making it easier to tell the different tissues apart. The resulting blacklight photos look like a rave, albeit one made up of microscopic millipede genitalia.

To get further information about the structure of the millipedes' genitals, Xavier Zahnle at the University of California Davis, the paper's first author, conducted micro-CT scanning. "You can put these tiny millipedes into test tubes and do CT scanning on them, and you don't have to dissect the specimen, so it remains intact," explains Sierwald. "That is the really cool thing. The CT scan takes images of slices, and Xavier worked out the entire complex software program to analyze the slices and put them back together."

All of these images of the millipedes' genitalia, both on their own and locked together in the act of mating, helped the researchers figure out how the process actually works for Pseudopolydesmus.

In most millipedes, including Pseudopolydesmus, the male's testes are located in the body starting behind his second pair of legs. But his gonopods, the specialized pair of legs used to insert sperm into the female, are way back on his legs of the seventh body ring. "He has to ejaculate and then dig his seventh-ring gonopods into that ejaculate," she explains. "It's a blue-ish liquid."

Once the male has gotten his gonopods covered in blue ejaculate, he's ready to insert them into a female's vulvae. "She has two openings, one on each side between her second pair of legs," says Sierwald. The microscopic images showed the tiny fleshy part of the male's gonopods that actually enter the vulvae. "We had no idea for this entire group, which part is inserted and where it is inserted in the female," says Sierwald. Tiny claws on the end part of the male gonopod hook behind ridges on the female vulva.

After mating, the female's vulvae get sealed up with a gooey secretion, trapping the sperm inside. Later, when she lays her eggs, they get coated with the stored sperm on their way out of her body. The new imaging in this study also helps show how that process works.

"Before this study, we had no idea really where the secretions came from. I always thought it came from the male, because I thought the male wanted to seal off the female so that she couldn't mate again," says Sierwald. "But now, having seen the glands inside the female's vulvae through the CT-scanning, I think most of that secretion comes from the female. I don't know whether that is her way of protecting her vulvae or preserving the sperm. Those are interesting fields for further study."

In addition to giving us a better understanding of the mechanics of millipede sex, Sierwald hopes the project will enable scientists to better understand the relationships between different millipede species, which could shed light on how they evolved.

"This study will be important for understanding how millipedes in this genus are related and how they're distributed," says Sierwald. "They can tell us about the geologic history of North America. As mountain ranges and rivers formed, groups of millipedes would get cut off from each other and develop into new species." And, she notes, Pseuopolydesmus is just the tip of the iceberg.

"There are 16 orders of millipedes in the world, and for most of them, we have only faint ideas what the vulvae look like."