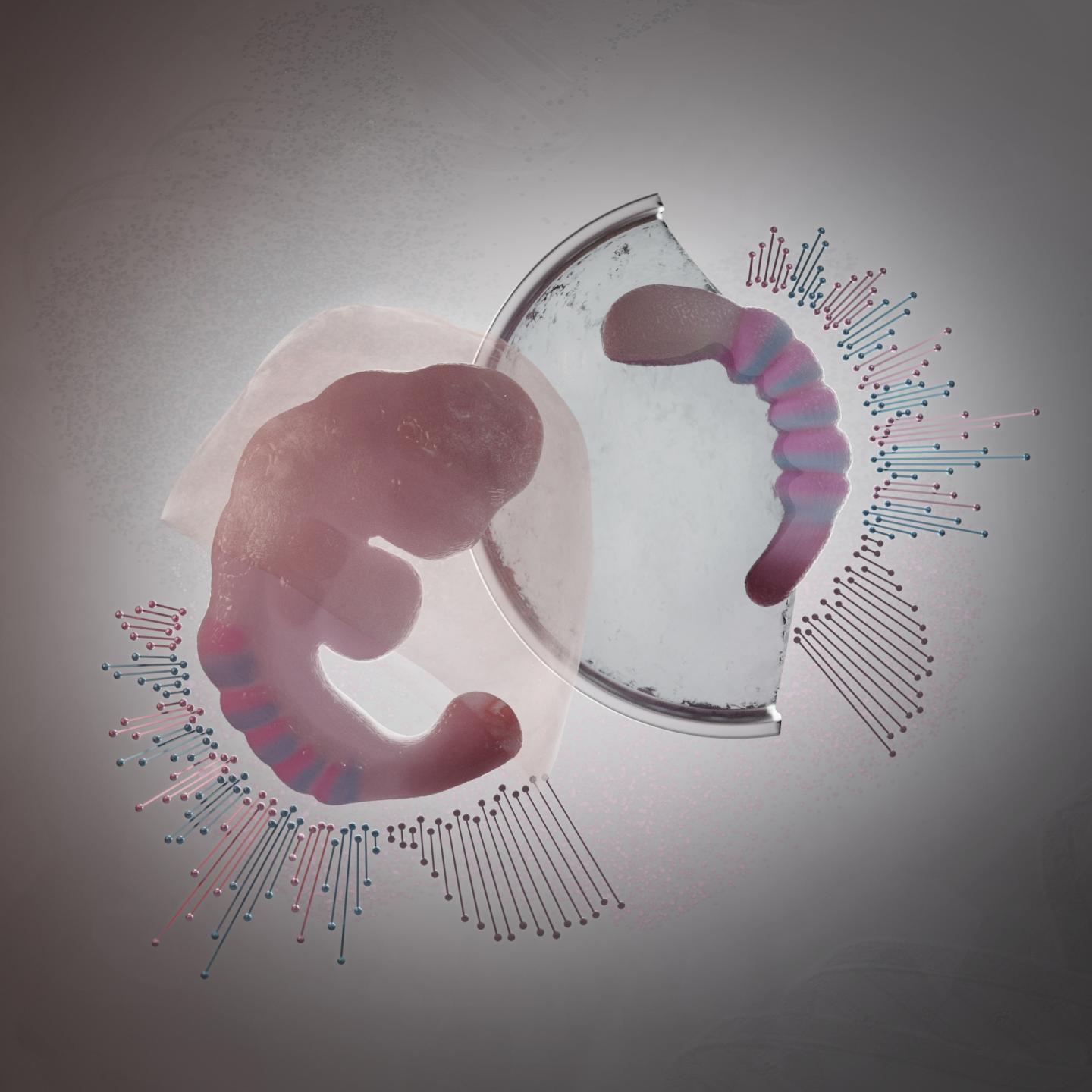 IMAGE: Pink-blue blocks represent somites, the embryonic precursors of the vertebrae and muscles.

Scientists from the Hubrecht Institute (KNAW) and the University of Cambridge (UK) have managed to generate complex embryo-like structures from mouse embryonic stem cells. These structures, called gastruloids, can now for the first time grow somites, the blocks of tissue that later develop into the vertebrae and muscles of the embryo. It is the first time that scientists managed to generate such advanced embryo-like structures that represent this stage of embryonic development, which occurs after implantation in the uterus. This model system allows these later stages of embryonic development to be studied in a dish. The results of their study were published in Nature on the 19th of February.

During embryogenesis, a fertilized egg develops into a complete organism. However, much is still unknown about the processes that direct embryonic development in mammals. For example, how do mammals regulate the number of vertebrae that make up their spines, or on which side of the body the heart should develop? Every now and then, something goes wrong in these processes. How does this happen? And can we prevent this from happening? Which compounds are beneficial for embryonic development, and which ones are bad? Studies that address such questions often require the use of mouse embryos. These embryos however develop within the uterus and it is difficult to obtain them in large numbers. Scientists from the laboratories of Alexander van Oudenaarden and Katharina Sonnen (Hubrecht Institute) and the laboratory of Alfonso Martinez Arias (University of Cambridge) are therefore developing an alternative: gastruloids, embryo-like structures generated from stem cells in the lab.

In 2014, these scientists for the first time grew embryo-like structures, called gastruloids, from mouse stem cells. Now, they have further improved the culture conditions to increase the similarities between gastruloids and embryos, which has resulted in gastruloids that grow somites. Somites are small "blocks" of tissue that line the back of the embryo, and will later form the vertebrae and skeletal muscles. The current gastruloids are thus more complex and resemble mouse embryos in more detail than previous models. Susanne van den Brink (Hubrecht Institute): "This is the first time we have managed to generate such complex embryo-like structures that recapitulate the embryonic stages of development that normally happen after implantation in the uterus." Vincent van Batenburg (Hubrecht Institute) adds: "It is fascinating to see that a homogenous group of cells can organize itself into an embryo-like structure that generates somites in a dish."

To this end, the scientists used state-of-the art technologies, such as single-cell sequencing and tomo-sequencing. Single-cell sequencing can be used to measure the total set of active genes in each individual cell, but it does not provide information about the location of these cells. In contrast, tomo-sequencing is a method in which the embryo or gastruloid is sectioned into thin slices, in this case from head to tail, after which the activity of genes is measured in each of these sections.

The combination of single-cell sequencing and tomo-sequencing enabled the scientists to measure exactly which cell types are present in gastruloids, and where these cell types were positioned along the head-to-tail axis of gastruloids and embryos. Susanne van den Brink (Hubrecht Institute): "We discovered that gastruloids are very similar to embryos, which makes them a very suitable model system to study embryonic development." Anna Alemany: "An important difference between embryos and gastruloids however, is that gastruloids do not have a brain or placenta. Therefore, these structures are not viable."

With this study, the scientists show that gastruloids can now be used to study more complex processes that happen in embryos, such as the processes that regulate somite formation. Alexander van Oudenaarden: "A main advantage of this model system is that gastruloids can be grown in large numbers. This means that we may be able to use them to test new drugs for developmental defects, or to test which compounds are toxic for developing embryos." Scientists can also use gastruloids to study how embryonic defects appear, such as defects during the formation of the heart and muscles.