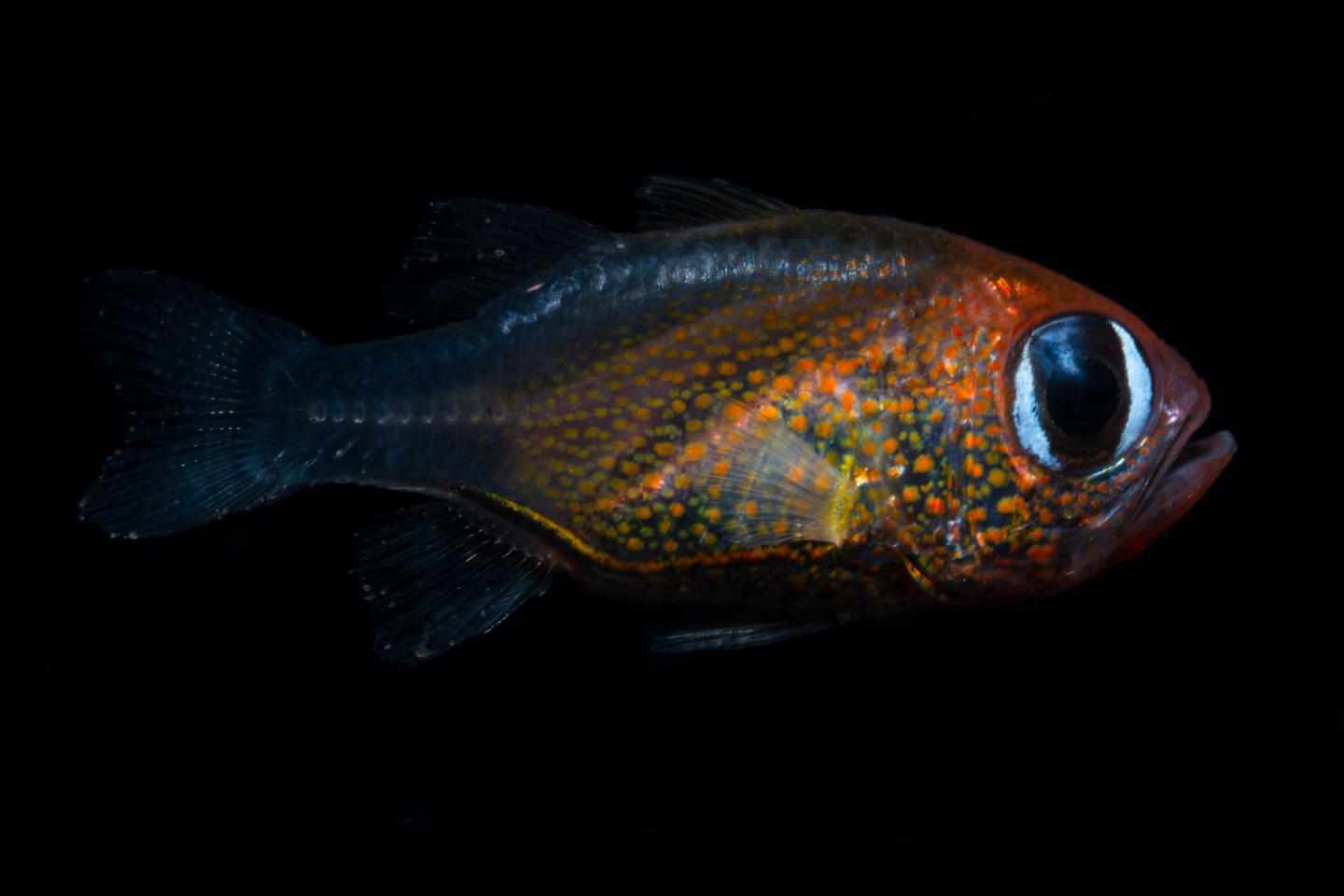 IMAGE: Siphamia arnazae, the cat-eyed cardinalfish, is a new species of cardinalfish from Papua New Guinea.

Proving that our vast and dynamic planet still contains unexplored places, the scientists discovered these new plants and animals across five continents and three oceans--venturing into Croatian caves, diving to extreme ocean depths, and surveying savanna forests. Their results help advance the Academy's mission to explore, explain, and sustain life.

"Despite decades of tirelessly scouring some of the most familiar and remote places on Earth," says Shannon Bennett, PhD, and Academy Chief of Science, "biodiversity scientists estimate that more than 90% of nature's species remain unknown. A rich diversity of plants and animals is what allows life on our planet to thrive: the interconnectedness of all living systems provides collective resilience in the face of our climate crisis. Each newly discovered species serves as an important reminder of the critical role we play in better understanding and preserving these precious ecosystems."

Below are highlights from the 71 new species described by the Academy in 2019. For a full list of species and hi-res images, please contact press@calacademy.org.

Flowering plants in need of protection

Emeritus Curator of Botany Frank Almeda, PhD, described a rare white-blossomed plant Trembleya altoparaisensis this year based on several specimens collected over 100 years ago by the famous 19th-century botanist Auguste Francois Marie Glaziou. As rare now as it was then, the plant proved difficult to find in the wild. "People don't think plants move," says Ricardo Pacifico, a PhD student working with Almeda and visiting researcher at the Academy, "but they do." When an environment changes, plants will move to areas that better suit them. For botanists like Pacifico--who sometimes relies on a single museum specimen collected decades ago to track down a plant's current whereabouts in the field--these migrations can be both challenging and rewarding. Luckily, on a recent expedition to the lush canyons of Chapada dos Veadeiros National Park in Brazil, Pacifico was able to track down a living specimen of Trembleya altoparaisensis to inform Almeda's species description.

Almeda emphasizes the importance of Pacifico's fieldwork to document exactly where these plants thrive in the wild. "Sure, national parks are protected," he says, "but we must ensure we know what grows in the parks." He says that finding and documenting species such as T. altoparaisensis and Gravesia serratifolia--another new species from a national park in Madagascar described by Almeda and his former student, Heritiana Ranarivelo--is crucial for effective management of the parks in the event of wildfires or other disasters.

A long-snout skate with potentially high stakes for steaks

Thanks to a discovery by Ichthyology Research Associate David Ebert, PhD, the Falkland Islands have welcomed a new-to-science skate. Since the 1970s, the Falkland Island fisheries have been one of the largest distributors of skates--cartilaginous ray-like fish that live at depths of up to almost 2000 feet (600 meters). The fish are particularly popular in Korea, where they are fermented or filleted into steaks. Through their research, however, Ebert and his team have shown that some of the skates on the market might not be Dipturus chilensis as previously thought, but are instead the newly described species Dipturus lamillai. Ebert urges fisheries to reevaluate their sustainability and surveying practices in order to prevent overfishing of the newly described species before its population status can be fully evaluated--and to ensure the wrong skate doesn't end up as a steak on a dinner plate.

A menagerie of microendemic and critically endangered reptiles

Academy Research Associate Aaron Bauer, PhD, has described more than 205 reptiles during his career, and this year he adds another 15 mottled day geckos, three island-dwelling skinks, an ostentatiously orange lizard, and a high-altitude girdled lizard to the tree of life. Bauer recommends that many of these reptiles be listed as critically endangered due to their microendemism--a term used to describe species only found in an extremely small geographic range. This restricted distribution means these animals are particularly susceptible to any sort of disturbance, such as deforestation. In the case of the newly described skink Kuniesaurus albiauris, invasive fire ants already threaten its restricted, native habitat in New Caledonia. Bauer says that finding these microendemic species is crucial for conservation. "If we don't explore isolated habitats, like mountaintops," he says, "we would miss a huge part of the biodiversity that's unique to these regions."

Despite being less than 60 miles off the coast of San Francisco, much of the biodiversity in the Cordell Bank National Marine Sanctuary remains a mystery. This is especially true of deeper-dwelling species. "We know the intertidal zone, but the deep sea is out of sight, out of mind," says Invertebrate Zoology Curator Gary Williams, PhD, who described two new California coral species this year. Williams says that deep-sea surveys using remotely operated vehicles--like the 2018 expedition led by the National Oceanic and Atmospheric Administration that collected a new lemon-yellow octocoral Chromoplexura cordellbankensis--are increasingly important for informing the expansion of marine protected areas and protecting the beautiful biodiversity thriving in the unexplored depths of our own backyard.

A fleet of fish (including a cat-eyed cardinalfish and a fish named C. wakanda)

From the purple, armor-like scales of the vibranium fairy wrasse Cirrhilabrus wakanda to the scintillating stare of the cat-eyed cardinalfish Siphamia arnazae, Academy researchers described 17 stunning new species of fish this year. Many of the colorful creatures come from tropical reefs--ecosystems known for both their biodiversity and their vulnerability to climate change. As the oceans continue to warm, the species that depend on the reef's abundant resources are jeopardized. Efforts to document these species, such as those by Academy researchers and their collaborators, helps to ensure that conservationists, policymakers, local communities, and beyond better understand what is at stake.

As you move east from the Pyrenees Mountains on the border of Spain and France to the Balkan Mountains outside Bulgaria's capital city of Sofia, a group of related cave-dwelling harvestmen (organisms related to spiders) becomes more adapted to life in the dark. This gradient of traits--known in biology as a character cline--helps researchers better understand the process of how a new species branches off on the tree of life. There is now a new link in this character cline chain thanks to the description of the cave-dwelling harvestman Lola konavoka from Croatia by Academy Curatorial Assistant of Entomology Darrell Ubick.

This year Ubick also co-describes the first--and only--species in a new family of "ant-worshipping" spiders. These curious arachnids spend most of their time underground in ant mounds, although scientists aren't sure why. "The only way to see what they're doing," says Ubick, "is to dig them up. But then they're no longer in their natural state." It wasn't until a recent expedition to Mexico's Chihuahuan desert--the spider's namesake--that scientists were first able to witness the species in the wild. But since they were found scattered around the surface of a collapsed ant nest, their underground behavior remains a mystery.

A stunning assortment of sea slugs

Academy Curator of Invertebrate Zoology Terry Gosliner, PhD, has described about one quarter of colorful sea slug species known to science, but these masquerading marine invertebrates still find ways of surprising him. Parts of Madrella amphora--one of six new species Gosliner describes this year--closely resemble the snail eggs that tend to surround their habitat. "We recently confirmed through genetics that sea slugs mimic the colors of other species" says Gosliner, "but it's rare to see sea slugs mimic other animals entirely." Two of the other new-to-science sea slugs are notable for being unusually small members of a group of typically large nudibranchs known as sea hares--named for two appendages on their head that resemble bunny ears.