Scanning system in sperm may control rate of human evolution 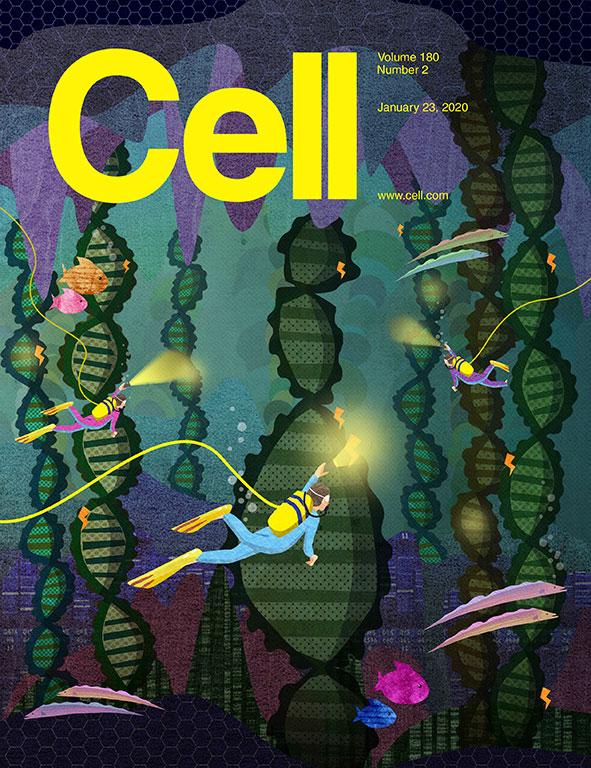 IMAGE: This is the cover image of the current edition of Cell, which relates to the NYU Langone study.

Maturing sperm cells turn on most of their genes, not to follow their genetic instructions like normal, but instead to repair DNA before passing it to the next generation, a new study finds.

Led by NYU Grossman School of Medicine researchers and published online January 23 in Cell, the study focuses on a mystery of biology: human sperm cells activate by far the largest number of genes (90 percent), a pattern also seen in other species like mice, birds, and even fruit flies. Cells in most organs express about 60 percent of their genetic code, or just the subset of genes needed for a cell type to do its particular job.

"It now seems obvious that sperm activate so many more genes as they develop because doing so runs them through a DNA repair process, and protects the integrity of messages about to be inherited," says senior author Itai Yanai, PhD, director of the Institute for Computational Medicine at NYU Langone Health.

"We also found that such repair in sperm is less active in genes that are activated, or transcribed, less often," adds Yanai, also a professor in Department of Biochemistry and Molecular Pharmacology at NYU Grossman School of Medicine. "This supports the theory that evolution is using transcription frequency as a lever, dialing it up to preserve the DNA code in some genes, but turning it down to enable changes elsewhere when it contributes to survival."

An example of genes not activated, not repaired, and free to accumulate changes in sperm were those related to immunity, which must continually evolve if the body is to recognize and attack ever-changing bacterial and viral invaders.

To conduct the new study, the authors analyzed gene expression patterns during sperm maturation at single-cell resolution. They first collected samples of human testes tissue, biopsied from consented volunteers. Using microfluidics, they then passed all cells in the samples down a tube just large enough for them to flow through in single file.

Within the tube each cell was pushed into its own water droplet, which acted like a mini-test tube in which enzymes opened the cells and then attached cell-specific barcodes to each transcribed snippet of genetic material. The labeled transcripts were then used to create maps of which genes were turned on at each point during sperm maturation. The team then cross-referenced these findings with known DNA variations in human population databases to estimate how often repair occurred in a given gene.

Surprisingly, researchers found that genes activated even a few times during sperm cell development contained 15-20 percent fewer DNA code errors than unexpressed genes, with the difference attributed to transcription-coupled repair (TCR). This process replaces faulty DNA patches just before the instructions they contain are converted into a related genetic material, RNA, during transcription, the first step in gene expression. RNA transcripts are then read to build proteins that make up cell structures and signals.

Cellular processes, including transcription, along with toxins in the environment, continually introduce errors into DNA chains, with TCR weeding out some of the altered code. The difference, the researchers say, is that sperm cells appear to apply TCR to more genes than is normal, but then to halt gene expression by mechanisms unknown before proteins are made.

Moving forward, the research team will seek to confirm whether sperm-derived genetic changes occur more often in genes not expressed during the maturation of sperm.

This may reveal insights into the causes of many genetic diseases linked to changes in the sperm of aging fathers. Male reproductive cells are known to divide and multiply throughout a person's life, with errors introduced each time. The authors say this may provide a rationale for the existence of widespread scanning uniquely in sperm, because egg cells received by each female in the womb do not multiply for the rest of her life.

Furthermore, the team will determine whether cells in the brain, which also express a large percentage of their genes, employ "transcriptional scanning" like sperm cells, and whether the scanning fails with age to increase risk for neurodegenerative diseases. Embryonic stem cells also display the high-transcription, low-mutation signature that could indicate the presence of such scanning during development.

"Survival of the fittest is a foundation of evolutional theory, but what if other mechanisms bias which gene types are more susceptible to change before natural selection can act on them?" asks first author Bo Xia, a PhD candidate in Yanai's lab. "Such a bias in the testes would have a dramatic effect, but only over evolutionary time scales, say millions of years."