A grain of salt or two may be all that microbial electrolysis cells need to produce hydrogen from wastewater or organic byproducts, without adding carbon dioxide to the atmosphere or using grid electricity, according to Penn State engineers.

"This system could produce hydrogen anyplace that there is wastewater near sea water," said Bruce E. Logan, Kappe Professor of Environmental Engineering. "It uses no grid electricity and is completely carbon neutral. It is an inexhaustible source of energy."

Microbial electrolysis cells that produce hydrogen are the basis of this recent work, but previously, to produce hydrogen, the fuel cells required some electrical input. Now, Logan, working with postdoctoral fellow Younggy Kim is using the difference between river water and seawater to add the extra energy needed to produce hydrogen.

Their results, published in today's (Sept. 19) issue of the Proceedings of the National Academy of Sciences, "show that pure hydrogen gas can efficiently be produced from virtually limitless supplies of seawater and river water and biodegradable organic matter."

Logan's cells were between 58 and 64 percent efficient and produced between 0.8 to 1.6 cubic meters of hydrogen for every cubic meter of liquid through the cell each day. The researchers estimated that only about 1 percent of the energy produced in the cell was needed to pump water through the system.

The key to these microbial electrolysis cells is reverse-electrodialysis or RED that extracts energy from the ionic differences between salt water and fresh water. A RED stack consists of alternating ion exchange membranes -- positive and negative -- with each RED contributing additively to the electrical output.

"People have proposed making electricity out of RED stacks," said Logan. "But you need so many membrane pairs and are trying to drive an unfavorable reaction."

For RED technology to hydrolyze water -- split it into hydrogen and oxygen -- requires 1.8 volts, which would in practice require about 25 pairs of membrane sand increase pumping resistance. However, combining RED technology with exoelectrogenic bacteria -- bacteria that consume organic material and produce an electric current -- reduced the number of RED stacks to five membrane pairs.

Previous work with microbial electrolysis cells showed that they could, by themselves, produce about 0.3 volts of electricity, but not the 0.414 volts needed to generate hydrogen in these fuel cells. Adding less than 0.2 volts of outside electricity released the hydrogen. Now, by incorporating 11 membranes -- five membrane pairs that produce about 0.5 volts -- the cells produce hydrogen.

"The added voltage that we need is a lot less than the 1.8 volts necessary to hydrolyze water," said Logan. "Biodegradable liquids and cellulose waste are abundant and with no energy in and hydrogen out we can get rid of wastewater and by-products. This could be an inexhaustible source of energy."

Logan and Kim's research used platinum as a catalyst on the cathode, but subsequent experimentation showed that a non-precious metal catalyst, molybdenum sulfide, had a 51 percent energy efficiency. The King Abdullah University of Science and Technology supported this work. 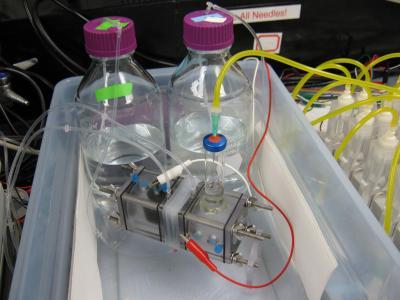 This is an electrolysis cell with RED stack.